Till today, there is no formal agreement between the Kukis and the government after the British left India, with regards to their ancestral land. 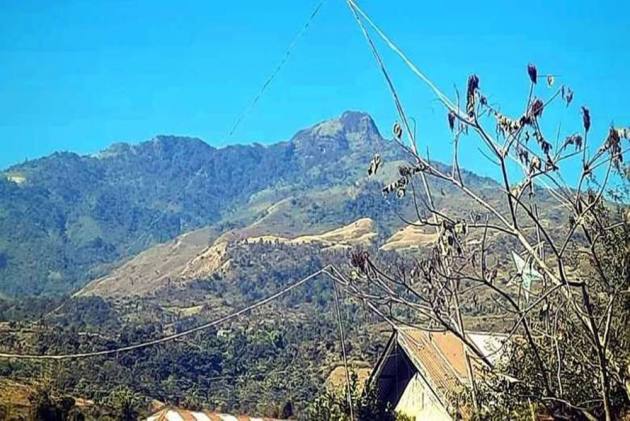 Amidst the calamitous onslaught of the second wave of Covid-19 in the state, where hundreds have died, thousands have been affected by the disease and tens of thousands are struggling to make ends meet due to loss of livelihood, the Manipur state government has considered planting trees and landmarking in the so-called "Kanglatongbi to Kangpokpi Forest reserved" as an urgency above all things.

Earlier, in 2020, the state government had released an order to declare the Koubru range as a reserved area. In May 2021, Manipur Forest, Environment, and Climate Change Minister, Awangbou Newmai asserted that Mount Koubru falls under the Kanglatongbi-Kangpokpi Reserved Forest which was declared as Reserved Forest in 1968 under the Indian Forest Act, 1927.

Interestingly, the tribes inhabiting the forest do not know the said statute which was formulated before Manipur attained its statehood and before the Hill Area Committee came into existence.

Does all land belong to the state?

While attending the first mass tree plantation at Mangjol village, Kangpokpi District, the Manipur CM N Biren Sing has been quoted as saying, 'all lands belong to the state government.' The remark was made to justify the boundary pillar installation of Kanglatongbi to Kangpokpi forest reserved. Going by the simple logic that the Government belongs to the people, his remarks only strengthen the view that land belongs to people. What the Manipur Government failed to acknowledge is the land ownership rights of the Kuki tribes. It is worthwhile to ask, 'Who own the lands before Manipur was formed before India gained independence and before the British came?'

Whose land is it anyway?

The Kukis have a clear history of them living freely in their ancestral lands. That they have fought the British in the Anglo- Kuki war 1917-1919 in defense of their ancestral land and freedom is well documented and acknowledged worldwide. Ironically, the state government had declared a restricted state holiday in acknowledgment of the centennial commemoration of the Anglo Kuki war, also known as the Kuki Rising/ Kuki Rebellion.

Till today, there is no formal agreement between the Kukis and the government after the British left India, with regards to their ancestral land. It is however understandable that since the ancestral lands of the Kukis politically fall under India and Myanmar, they will be subjected to the laws of the respective countries. But to disregard their interests and proclaim their ancestral lands without any consideration and consultations whatsoever is highly authoritarian and does not augur well for a state government in a democratic country that should adopt the people-centric approach of governance.

The Government had earlier stated environmental concerns as the reason for the need to declare Reserved forests in Koubru and Thangjing ranges. Local CSOs have more than once solicited the kind attention of the government to discuss and chalk out an amicable solution to the highly delicate issue. It is not understood as to how the government refused an opportunity such as the co-operation of the local people if its real intention is to resolve environmental issues. Notably, the state government had earlier in November 2020, through its Art and Culture Department attempted to declare Mt. Koubru and Mt. Thangjing as sacred sites of the Hindus, ignoring the sentiments of other religions, especially the local populace who practiced different religions.

Ever since the Government made its intention clear of declaring Koubru range as forest reserved in 2020, the local populace has voiced their displeasure. The committee on protection and preservation of Mt. Koubru (COPPK) and Sadar Hills Chief Association (SAHILCA) have fervently appealed to the Government to respect the rights and privileges of the forest dwellers. "Despite our efforts to meet on the issue for the past months, the Chief Minister has turned a blind-eye till today and, considering all the above matters and to show our strong resentment, we unanimously declare to boycott the mass tree plantation and landmarking at Mount Koubru range", a statement of COPPK said.

Earlier, the Government of Manipur is reported to have mulled evicting more than 700 places located within KK Reserved and many other places in different reserved areas, taking the year 1980 as a baseline. The move, if it materializes anytime in the future, will be a perilous step that is ignorant of the presence of unregistered villages before the areas were declared as forest reserved; it will be a misadventure on the part of the government to not acknowledge the fact that the tribesmen did not feel the need to register themselves or their lands.  They were unaware of the land registration process then and have been moving freely in their ancestral land. Prohibiting their occupations and ordering them to vacate their lands by citing the chronology of the registration of their habitat will be a clear violation of the 'The Scheduled Tribes and Other Traditional Forest Dwellers' (Recognition of Forest Rights) Act, 2006.'

It is time, the Government of Manipur needs to be reminded that they represented both the hill and valley. It must respect the constitutional safeguards of the hill tribes enshrined by the constitution and the various acts. The continued attempts to demarcate the lands of indigenous tribes into reserve land/forest will only alienate the already deprived and marginalized tribes in the state.

To ensure inclusive development, it should also review its policy of instituting all infrastructure of importance in the valley and reserving the hills to cater to its environmental concerns and obligations. While India is contemplating an inclusive idea that is considerate to the concerns of SC/STs, the recent move of the Manipur government has deeply affected the faith and trust of the Hill tribes in the system.

The Government will have to rethink its policies and approach to prove people wrong about the infamous notion it enjoys - of being biased, harsh, and inconsiderate towards the hill tribes.