Comprehensive redefinition of the relationship is required between Bangladesh and India, then moving forward with the issue-based relationship and only then it can turn into a 'special relationship' 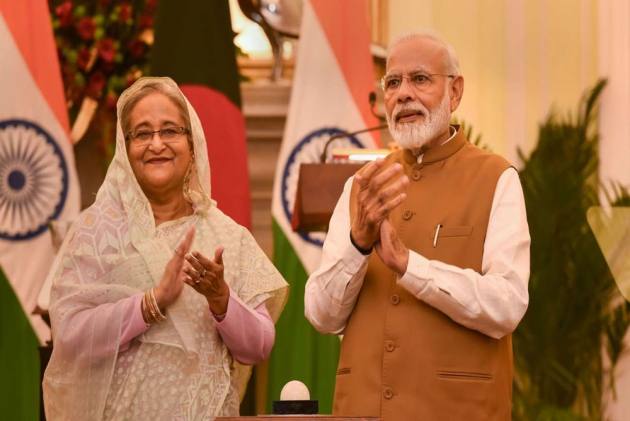 Bangladesh’s birth as a sovereign nation was a historic moment at the height of the Cold War. Seldom has the world seen such a pull of diplomacy in the birth of a nation that reconfigured friends and foes in the early 1970s. The geographical contiguity left Bangladeshis with no other choice—of 10 million people—but to take refuge in India. For India, this was not only a matter of good neighbourliness or strategic opportunity placed before it but also driven by the principles of Gandhian and Nehruvian philosophies that dictated in taking an overwhelming international role for fighting for those who could not do it for themselves. First, at the diplomatic front and then at the military font involving Track 1 and Track 2 diplomacies, India internationalized the Bangladesh issue and provided direct support to the Bangladesh cause. While celebrating the fiftieth anniversary of Bangladesh-India relations, one needs to recognize the past to its fullest as the past paves the way to create and construct the basis of a relationship.

Bangabandhu Sheikh Mujibur Rahman laid the foundation of Bangladesh’s foreign policy as ‘Friendship with all, malice to none that led to developing a meaningful engagement of Bangladesh in international politics as well as with India. In the first several years, the areas of discord between Bangladesh and India were identified, treaties and associated legal documents were signed, mostly ratified by the National Parliament of Bangladesh but were not reciprocated on the part of India. Since then, political changes took place and so did the international environment. Gradually, Bangladesh and India were able to mend fences on several issues such as the sharing of the water of the Ganges, signing of the extradition treaty between the two countries and Bangladesh’s solid and firm commitment not to let its land be used by India’s Northeast insurgents. In other words, as some scholars pointed out that Bangladesh and India have been able to advance their relationship to an institutional level where the mechanisms themselves would safeguard the sustenance of the key provisions and arrangements of the bilateral relationship.

Co-existence between two countries sharing the fifth largest land border can often be challenging but coordinated and transparent policies must have been able to resolve the issue, which unfortunately has not been the case between Bangladesh and India. Despite the latest understanding on ‘zero border killing’ between the border chiefs of both sides, the latest declaration of the Indian Minister of External Affairs Subrahmanyam Jaishankar—“No Crimes, No Death”—has created frustration on Bangladesh’s part as crimes can only be determined through a thorough process of investigation before pointing out the gun. Water sharing remains yet another seemingly intractable issue. While the proposal for the Ganges Water Sharing Treaty was mooted in the early 1970s, Bangladesh had to go a long way to establish its rights as a lower riparian state, the plurality of ‘the Ganges’ as an international water body and finally sign a treaty in 1996. The saga did not end here as Bangladesh and India share 54 common water bodies, where an integrated approach is required, which is being argued for quite some time now. The latest rift here is on the sharing of the water of the Teesta River, where often it seemed that the signing of a treaty was imminent yet did not materialize. It is time that India provides a direct timeline as to how this issue can be approached and resolved rather than the federal government claiming this remaining as a hostage to their internal politics. In the case of maritime boundary delimitation too, Bangladesh needed to internationalize the issue. Yet another significant issue of concern for Bangladesh is India’s unfailing support to Myanmar disregarding Bangladesh’s constraints on the Rohingya issue. The bilateral relationship can only flourish to a special level when these are not issue-based rather dealt with in a comprehensive manner—which India has not been able to demonstrate in pursuing its relationship with Bangladesh.

If anything, the issues of trade, investment and connectivity have reached paramount importance in today’s age. It is rightly pointed out by scholars that “connectivity is the new arms race of the 21st Century”, where who and how one state is connected with will determine its future progress. Also, with the onset of the Pandemic, one must recognize—1) physical borders exists but threats are not only exogenous, and 2) there is but the little option of non-cooperation where political will and resources must be coordinated to meet the new challenges of the new century. Politics is no longer seen as an ‘us vs. them’ framework rather it is seen as how ready states are to cooperate. Bangabandhu, the Father of the nation, reminded the world of this during his sole Non-Alliance Movement speech by pointing out the idea of sustainable co-development in its rudimentary form—only through coordinated international approaches, global problems can be resolved. India, being the largest country in South Asia, must move forward to create a basis through which it can be a development partner of Bangladesh. Similarly, it must understand that Bangladesh, reaching its 50th, has been able to establish its profile globally as a stable economy, which has performed the best in the South Asian region during the Pandemic. From the second decade of this century, a growing interest is visible among the great powers to come and invest in Bangladesh as Bangladesh is one of the key players in the Bay of Bengal region, and by extension, in the Indo-Pacific region. Bangladesh, a country with 160 million people, have fared much progress in terms of Human Development Index (HDI), girl’s education, women’s empowerment, micro-credit issues, among others. Bangladesh can no longer be termed just like a small state—which geographically certainly is—but not in terms of the bargaining power it has been able to create through concerted efforts taken in the past fifty years. Bangladesh’s global contribution to the United Nations Peacekeeping Forces (UNPKOs) and the commendable tasks done by female peacekeepers in maintaining international peace and security and its contribution to disaster management and ability to work in the international forums are reflections of its stable leadership under the Honorable Prime Minister Sheikh Hasina.

As a Czech proverb delineates— a good neighbour increases the value of your property. Bangladesh has turned into such a ‘good neighbour’ that must be recognized by India. Today’s Bangladesh cannot be seen through the prism of the 1970’s scenario. Despite such changes, often strategic calculations and perceptions stood in the way of developing a formidable partnership between the two countries. The latest steps on reenergizing the bilateral relationship through vaccine diplomacy and proposing fresh connectivity plans show that there might be a new future dawning in the bilateral relationship towards a more positive direction. One must recall here that the past acts as a guide to the future—the historic relationship between Bangladesh and India cannot be overshadowed by the presence of any other external factors. Bangladesh needs development partners to sustain its economic growth now it is on the way to graduate to be a Middle-Income Country. It needs to diversify its existing resources, develop infrastructural gaps and locate fresh areas to evolve. Friendly Bangladesh-India relations can only move towards a ‘special relationship’ with the understanding of each other’s concerns and priorities. History testifies that while Bangladesh has had done so, India needs to step forward and apply its Neighborhood First policy in a more pragmatic sense. Bangladesh’s development would only enhance that of India’s and the South Asian region as a whole while effective connectivity projects materialize. Geography made us neighbours, political developments made us friends since the birth of Bangladesh—now is the time to move it towards a special status through paying attention to the contemporary realities and needs of each other. Comprehensive redefinition of the relationship is required between Bangladesh and India, then moving forward with the issue-based relationship and only then it can turn into a “special relationship”.

( Lailufar Yasmin, Professor, Department of International Relations, University of Dhaka, Bangladesh. She can be reached at lyasmin@du.ac.bd )