On Assam, EC Erred. In his Q&A With Nicolas Burns, Rahul Gandhi Crossed The Line

With the Assam faux pas, the EC erred. Any move or invitation to involve an external party or country in India’s internal matters is plain wrong. On this, therefore, Rahul Gandhi is wrong. 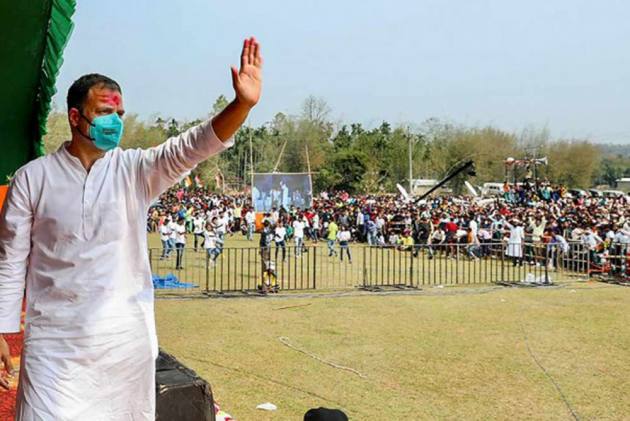 If anyone were to look around for the most trusted, respected institutions that India has, the Supreme Court and Election Commission would surely rank among the top two. True, in recent years, periodic questions have been asked, and instances have been cited, on how even these institutions, at times, have failed to be seen as impartial or fair. But these are aberrations, at best. The institutional charisma of these institutions continues to strengthen democracy.

The events of the last few days in Assam, therefore, are something that the Election Commission would like to forget like a bad dream. Finding an EVM with a political candidate, that too from the ruling party, raises serious questions about the arrangements put in place by the EC. Opposition parties, led by the Congress, pounced on the EC, asking it “to act decisively”. The EC put out a long-winded explanation, suspended officials, and ordered a re-poll in a booth. The EC may have been well-intentioned in its acts and responses, but the damage was done. No such irregularity should have been allowed to take place in the first place.

While the Election Commission of India rightly prides itself as a fiercely independent, robust institution, with democracies across the world often paying glowing tributes to its conduct of fair and free elections, everything must be done to ensure that its independence and sense of fair play only get enhanced.

In the recent past, proposals have been mooted to have a bipartisan mechanism to appoint election commissioners. While this is a political call, and requires extensive confabulations and debates, there are a number of steps that the Election Commission and its commissioners can take to ensure that its institutional integrity and charisma are further enhanced.

For one, a retiring election commissioner must never aspire for or accept any post-retirement benefits, be it a Governor’s office or a Rajya Sabha membership.

In recent years, the EC has also been unfairly targeted. Very often, political parties raise questions over the reliability of EVMs. This is a debate that EC has long settled with conclusive evidence. As a pattern, however, the losing side in an election raises questions over EVMs. For some politicians, EVM-bashing is their favourite pastime.

In the context of the recent Assam faux pas, many Congress leaders, including Rahul Gandhi, hit out at the Election Commission. This is understandable.

In an interactive online session with former US undersecretary of state for political affairs, and now Harvard academic, Nicolas Burns, Rahul Gandhi, after talking about Assam, went all out against the government, and the RSS saying that “various institutions (in the country) were being filled with its people”. In his earlier online interactions with Kaushik Basu and Ashutosh Varshney, he had said much the same. Rahul Gandhi is well within his rights to raise the issue.

In the UPA regime, it was often debated how the institution of Prime Minister’s Office was devalued and rendered ineffective by 10, Janpath. Rahul’s famous act of tearing up of an ordinance at a Delhi press conference was cited to argue that he didn’t care for country’s institutions, institutional structure and their autonomy.

These charges and responses are normal, and only to be expected, in a democracy. Any debate around accountability only strengthens democracy.

In his latest interaction with Burns, after charging that the institutions have been hijacked, Rahul said that the “US was silent about the developments in India”. ‘I don’t hear from the US establishment. If you are saying ‘partnership of democracies’, what is your view on what is going on here?” Rahul asked during the discussion.

This open invitation to US to meddle in Indian affairs is deeply problematic and disturbing. What next? Will he then ask those having problems with the Union government’s Article 370 move to petition the UN? Is this how Rahul Gandhi seeks to inspire confidence and win the trust of the people?

Political differences and rivalries are par for the course in a democracy. India’s internal affairs, however, must remain strictly internal. On national integrity and sovereignty, it’s important that everyone speaks in one voice.

Institutions strengthen and define a democracy. With the Assam faux pas, the EC erred. On India’s internal affairs, and issues of national integrity, India must speak in one voice. Any move or invitation to involve an external party or country in such matters is plain wrong. On this, therefore, Rahul Gandhi is wrong.

(The writer, a JNU alumnus, is a political analyst. Feedback can be sent to skjthe@gmail.com Views expressed are personal and do not necessarily reflect those of Outlook Magazine.)