The Citizenship Amendment Act will jail Muslims who are accused of being foreigners and can't prove that they are Indians to the satisfaction of the BJP government. 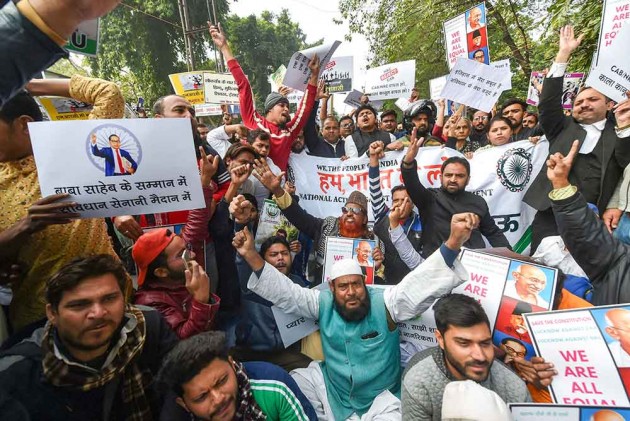 We should examine why such strong protests have broken out across India and are being covered across the world. The government says that there is confusion in the minds of the protesters and a lack of knowledge about its legislation and proposed actions on citizenship. But the fact is that we are seeing wider and more passionate resistance to the government in public than at any time since 2014. The question is why.

To my mind, it is incorrect for the government to believe that the protesters do not know what they are protesting against. And it is also incorrect to believe that the protestors should not fear what the government is currently doing and what it has announced for the future. A little background may be useful here. In 2017, the Assam government submitted an affidavit in Gauhati High Court. It concerned the extension of the two-year contracts of those advocates who were in charge of the Foreigners Tribunals in that state.

Why North-Eastern Indigenous Tribes Are Up In Arms Against CAA

Uttar Pradesh: 16 Killed In 2 Days Amid Violent Protests Over CAA

Also Read | Citizenship Law Is The Result Of BJP's Majoritarian Instinct But Has It Thought It Through?

So, what is the pattern?

I do not have to explain the pattern here because it is obvious. What has happened is that, in Assam, contract workers are being encouraged and rewarded to declare people foreigners. Those contract workers who are not doing what the government wants are being sacked.

Then, people declared as foreigners are jailed. When the National Human Rights Commission sent a team to examine the condition of these people, they found that families were separated permanently, with women and children living in a different jail from the men. Many had gone mad and they were being housed in the same jails as convicts.

India is doing this to its own people and doing so under a reversal of the burden of proof. In the civilised world, the government has to prove that an individual has committed a crime. In India, the individual must prove that she must not be jailed. This is what the National Register of Citizens, which Amit Shah will implement across the country, is all about and this is how it is being executed.

Now let us turn to the Citizenship (Amendment) Act (CAA). What does it do? It will jail Muslims who are accused of being foreigners and cannot prove that they are Indians to the satisfaction of the BJP government. The people of all other religions are exempt from proving this because the CAA says that even if they entered India illegally before December 2014, they will be given fast track citizenship. Only Muslims will have to prove their credentials.

Thus, the NRC is aimed at rounding up and permanently jailing Indian Muslims who cannot produce the documents to satisfy a government, which punishes those officials who do not declare maximum number of Muslims foreigners. It is for this reason that we see so many Indian Muslims protesting these laws and it is for this reason that so many non-Muslims cannot stand by and watch what is happening in their country.

Lastly, it is for this reason that the foreign minister of India shamefully ran away this week, cancelling his appointment with a US Congressional delegation which was aware of what India is doing to its own people. He knew that he would not be able to defend his actions and that of our government because they cannot be defended.

Also Read | 'There's No Detention Centre In India, Nobody Is Going There': PM Modi At Ramlila Maidan Rally