Opinion: Citizenship Act Another Step Towards Hindu Rashtra Turning Muslims Into Perpetual 'Other'

It is the students bearing the brunt of brutal lathi-charge, teargas and firing at the hands of police, writes Parveen Sultana. 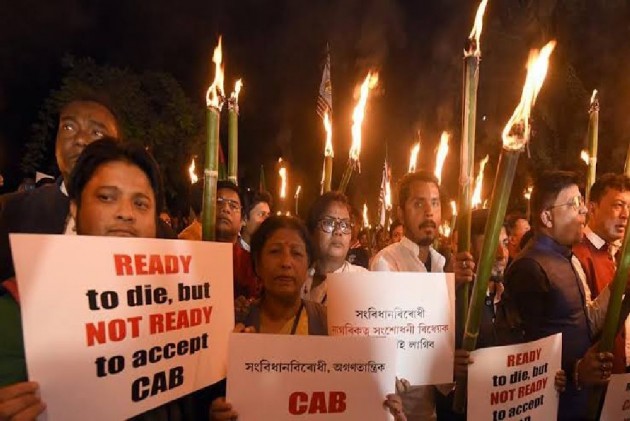 Making a mockery of people’s sentiments and large scale protests -- rocking the Northeast for the last few days -- the Government went ahead with the Citizenship Amendment Bill, which was then cleared by the Parliament. And with that, Assam witnessed an unprecedented outpouring of people on the streets since the days of the Movement.

Students are at the forefront, protesting against this arbitrary bill, which not only threatens the Constitution of India but also jeopardises the language and culture of the people of Assam. And it is the students bearing the brunt of brutal lathi-charge, teargas and firing at the hands of police. At the time of publication, at least six people had already lost their lives in protests.

Assam is burning and the elected political class continues to be a mute spectator. The bill was first introduced in January 2019. It lapsed, for the BJP didn't have numbers in the Rajya Sabha. This time, the bill was introduced with a few changes, making it more absurd and arbitrary. The government, initially, justified the proposed draft on the pretext of providing citizenship to minorities, who are victims of religious persecution from Pakistan, Bangladesh and Afghanistan. But in the 2019 version, the words "religious persecution" has not been used assuming that minorities will always leave these countries because of persecution.

OPINION: CAB Not Based On Religious Intolerance, Has Nothing To Do With India’s Muslims

So as the bill stands now, a person belonging to the six religions mentioned above need not prove any persecution in their country of origin. Why did the bill leave Sri Lanka an Myanmar, two countries with a large number of Indians facing persecution of the worse kind on linguistic and ethnic lines? The government, in an equally arbitrary manner, included Afghanistan, which was not affected by partition. But the country witnessed much oppression during the Taliban regime and Hazara Muslims, who were Shias, bore the brunt. This bill doesn't bring any respite to them.

Allaying the fears of Assam and the region, the government decided to keep areas under "Inner Line Permit" and "Sixth Schedule" outside the ambit of this bill. But it does little to the state of Assam. Only seven out of the 33 districts will be given exempted under this provision. As such, the 26 districts will be easily available for settlement of these newly turned citizens.

The people of Assam are also being told that CAB is inevitable, for the Hindus left out in NRC to be included. Interestingly, the 19 lakh people left out of NRC's final draft have submitted legacy data claiming a presence in the country before 1971. Now to benefit from CAB, will they declare that they migrated at some point from one of the three neighbouring countries?

What the government has done will bring nothing for poor Hindus left out of the NRC, except for the humiliation of admission out of compulsion of being a foreigner. Will CAB, in any way, help the people from Bihar, who could not submit adequate documents? In case of Assam, the problem is multi-pronged -- the 1971 date was agreed to after a prolonged movement and an accord. The entire state underwent a tumultuous haranguing process for ugdation of NRC. The NRC saw almost 60 deaths because people could not deal with the pressure of being rendered stateless. With a stroke of a pen, the government rendered the entire process irrelevant because the figures failed to take their politics ahead.

In such a situation, there is a genuine and palpable fear among one and all in Assam. While the Muslims feel that after the passage of the bill if a new NRC is initiated they will be the main target for keeping the discourse of illegal immigrants alive and kicking. The Assamese speakers’ fear of loss of language and culture should not be brushed aside. The danger of this protest turning against Bengali-speaking is another possibility everyone should be wary of. Soon, it will be evident that the new bill doesn't help a single person but will only be a regressive step towards the idea of a Hindu Rashtra turning the Muslims into the perpetual "other". The promise of constitutional safeguards also seems bleak with no clear idea about who is an Axomiya. Till we come out of this quagmire, my beautiful state may continue to burn.