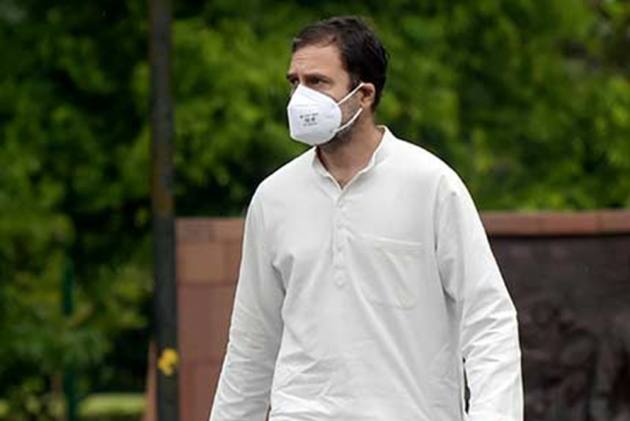 For a party that takes pride in its visceral hatred for Rahul Gandhi, the BJP makes the Wayanad MP appear like a paragon of versatile contradictions. As per the BJP’s toolkit, the 50-year-old former Congress chief can be a Pappu (half-wit) or a conniving conspiracist just as he can, at once, be a lobbyist for Big Pharma, a Prophet of Doom and a Vulture. These are just a few epithets that sundry BJP leaders have lavished on Gandhi through the 17 years of his political career. There are plenty more that keep coming each time the Nehru-Gandhi scion says or does something.

It shouldn’t have surprised anyone then that no sooner had Gandhi wrapped up his press conference, on Friday, the brickbats from the saffron gallery came flying his way, even though there was, in all honesty, nothing the Congress leader really said that was different from what he has been saying for well over a year now. Gandhi’s press conference, on Friday, was largely a regurgitation of his views on the Narendra Modi government’s evident mishandling of the Covid pandemic.

Gandhi spoke about the dire need for a vaccination strategy that ensures jabs for a majority of India’s population within the shortest possible time as against the presently chaotic inoculation drive that has achieved a pitiable result of vaccinating just over three per cent of our teeming millions while leaving countless citizens struggling to even register for the jab. He spoke about the risks of allowing “space for the virus to mutate, spread and keep coming back in third, fourth and fifth waves” wreaking more havoc than it already has. He insisted that “temporary solutions” like lockdowns, social distancing, wearing masks, etc. “will not stop the virus but only postpone the infection”. He alleged that the official data on Covid infections and fatality rate “is an exponential lie” and government – at the Centre and in the states, including the few ruled by the Congress – “need to be honest” while disclosing data “even if it frightens people because hiding facts will do more harm”. And yes, he held the Prime Minister singularly responsible for the hara-kiri that has been let loose across the country ever since Covid’s second wave began spreading like a wildfire.

India Will Vaccinate Everyone By December 2021, Says Union Minister

Predictably, the BJP and its army of followers on social media platforms like Twitter – yeah, the same microblogging site that BJP apparatchiks have accused of propagating an alleged Congress-backed toolkit that defames India – hit back at Gandhi. Union minister Prakash Javadekar promptly jumped to defend the government, declaring that India will complete its Covid inoculation drive by December this year. Going by Javadekar’s claim and the facts on record, it won’t take a mathematics genius to compute that should the government, indeed, begin an aggressive vaccination drive today, it will need to execute an approximate 10 million jabs per day to meet the December 2021 deadline of universal inoculation. The average of vaccinations per day through the months of April and May has, so far, hovered between 2.9 and 1.9 million doses. But then, of course, if the Centre is saying it will achieve full vaccination by December 2021, this must be true – after all, Modi did say Covid can be defeated within 21 days and then went on to declare that India had, indeed, defeated the virus. But then the damned ‘behrupiya’ of a virus decided to make a comeback, how can the government be faulted for the crimes of a virus?

Javadekar also accused Gandhi of “stoking fears” and creating doubts in the minds of ordinary citizens. Poor, gullible Indians – they are always taken for a ride by political leaders; banging plates and pots, attending super-spreader political rallies and now even getting swayed by press conferences. By Friday evening, ‘Pappu’ was once again trending on Twitter with scores of users tweeting expletives against Gandhi or simply repeating barbs and taunts that several BJP leaders had hit out with earlier in the day. Toolkit, anyone?

Gandhi and his colleagues in the Congress party, of course, wouldn’t be surprised by this umpteenth tsunami of derision. They must have felt a sense of déjà vu. The affronts were consistent with reactions that have come Gandhi’s way each time he and his party have provided unilateral advice to the Centre on handling different aspects of the Covid pandemic. Ridicule and sadistic mirth over it, has been the hallmark of the BJP’s response to every Covid-related proposal that has come from Congress. It is a different matter that vociferous rejection of every advice has been followed with the Centre quietly accepting them and then loud declaring that the measures were already in the pipeline before Gandhi or the Congress suggested them.

There are, of course, unassailable failures and hugely embarrassing gaffes that have dotted a better part of Gandhi’s political career – some so glaring that several of the appellations bestowed on him by the saffron brigade may even sound apt. It is equally indisputable that Gandhi’s predictions and subsequent assertions on India’s Covid scenario have had a distinct touch of clairvoyance.

For the BJP and its leading lights in the central government, it may be worth pondering that if they see a vulture in Gandhi today, they must be equally unsparing in analysing why the holy river of Ganga became a cesspool of putrid corpses. The shallow pit burials of thousands of suspected Covid victims along the Ganga river bank in UP should invoke the same scrutiny. As should the banality of Modi’s much-hyped and evidently obtuse vaccine diplomacy overdrive and his propensity to first centralize Covid-related decision making in the PMO and then, when things went haywire, leave the state governments to fend for themselves.

Vultures don’t kill; they feed off the kills of other predators or creatures that died of disease or natural causes. If the BJP is accusing Gandhi of acting like a vulture for satiating his political appetite because the Congress leader questioned the veracity of India’s official Covid fatality data, will it also honestly answer questions on the identity of the predators responsible for the corpses that stacked up at river banks, crematoriums and burial grounds? Is it not true that a cruel and needlessly centralized Covid-management system was just as much responsible as the virus itself for the mounting Covid death toll? If the BJP sees in Gandhi a Prophet of Doom, its leadership must ask itself why his statements are more in tune with the reality of the Covid crises and the heavy cost it is continuing to extract from ordinary Indians.