RCEP Fiasco May Be Good For Economy, But A Disaster For Foreign Relations

Having invested all its political capital in Kashmir, the BJP cannot take foreign policy decisions by ignoring domestic compulsions. 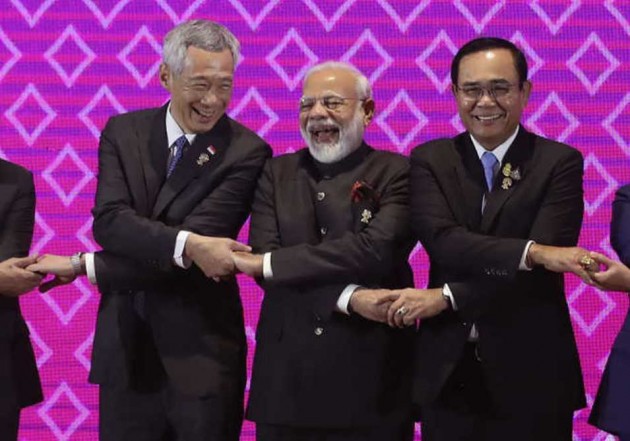 Prime Minister Narendra Modi’s eleventh-hour decision in Bangkok to keep India out of the Regional Comprehensive Economic Partnership (RCEP) is certain to be resoundingly welcomed -- including by those unacquainted with Gandhiji’s talisman or Modi’s conscience.

Business, industry, trade and the farm sector, among others, would be immensely relieved that India pulled out on November 4 from what appeared to be inevitable until the day before. The Opposition, particularly the Congress party, as much as the swadeshi sections of the RSS-led Sangh Parivar (as distinct from the BJP or GOI-led Parivar) may feel vindicated that their standpoints prevailed in Modi bowing to ‘better counsel’. Cheering by union ministers is only to be expected: They would have done so anyway, whether he had stayed out or joined RCEP.

There is no denying that the government was ambiguous about RCEP till as late as November 3. On the eve of his departure for Bangkok with the Prime Minister, Commerce Minister Piyush Goyal lashed out against Congress chief Sonia Gandhi for steering the Opposition against India joining the RCEP. Thus, until Modi made it clear on November 4, Goyal seemed to be rooting for the RCEP.

'Make In India' Has Become 'Buy From China': Rahul Gandhi's Takedown Of RCEP

The partnership was to be a trade pact between 16 countries – 10 of ASEAN along with India, China, Japan, Korea, Australia and New Zealand – that account for over half the world’s population and 30 per cent of its GDP. With India out of the RCEP, the world’s largest free trade bloc would now have 15 member-countries.

The main reason for India not joining is the fear of China: That RCEP would result in India being flooded with cheap Chinese goods, including re-routed products from other RCEP countries. And, India already has a $50-billion trade deficit with China.

Talks on RCEP began in 2013, under UPA’s Prime Minister Manmohan Singh, but it is Modi sarkar that has been negotiating for five of the last six years. Hence, the regime in power cannot claim credit for the outcome, by abjuring responsibility for the process. In fairness to Goyal, External Affairs Minister S. Jaishankar and Finance Minister Nirmala Sitharaman were also on board – and they are no less answerable than Goyal for the process and where it appeared to be leading until the last minute. The end result is thanks to the swadeshi factions of the RSS and powerful sections of Indian business and industry.

Keeping out of the RCEP may be a big positive for the economy, given the present state of the Indian economy and the political consequences it implies for the BJP as borne out by the results of the elections in Maharashtra and Haryana. The unmistakable election message is that even without an effective Opposition, economic distress can hurt the BJP’s political fortunes.

Having invested all its political capital in Kashmir – which has placed India at a huge disadvantage on the world stage – the BJP government cannot take foreign policy decisions by ignoring domestic compulsions. But it must also be mindful of the international community when taking domestic decisions like on Article 370 and Jammu & Kashmir.

Except for its economic impact at home – protecting Indian business, industry, trade and farmers -- the retreat from the RCEP is a negative for India in the region and beyond. At the most obvious level, it shows that India is not trade-friendly.

It exposes India as being fearful of trade with even smaller countries in the region, despite being a huge market. It shows that India lacks the economic strength to open up its markets; the inability to ensure structures and mechanisms, including in the neighbourhood; the clout of a regional power to meet the demands of trade and market; and, the resolve to stand up and deal with China in economic affairs.

Had India been in RCEP, given the terms of trade, it would have been a win for China. India out of RCEP with ASEAN free to bond with China on the Belt and Road Initiative is also a win for China.

The second big fallout is that India’s geopolitical ambitions would be hit hard. The “Indo-Pacific” mantra will remain just that – a mantra; with no tantra, yantra or astra to reinforce it. India is unlikely to be taken seriously as a regional power leave alone New Delhi’s claims of being a “balancing” or “leading” power.  The “Indo-Pacific” vision may well remain a dream without any heft or regional support to carry forward the mission.

Lastly, India would be seen as a country that cannot walk the talk. Only the day before crying off the RCEP, Modi had spoken of ASEAN as being at the core of our Indo-Pacific vision; at the heart of the Act East policy; and, its integration and economic vibrancy in the interest of India. The last act has taken the wind out of all that bombast.