Did the daughter of Prithviraj Chauhan commit 'sati' because her husband was killed in a battle at Panchkuian Road? 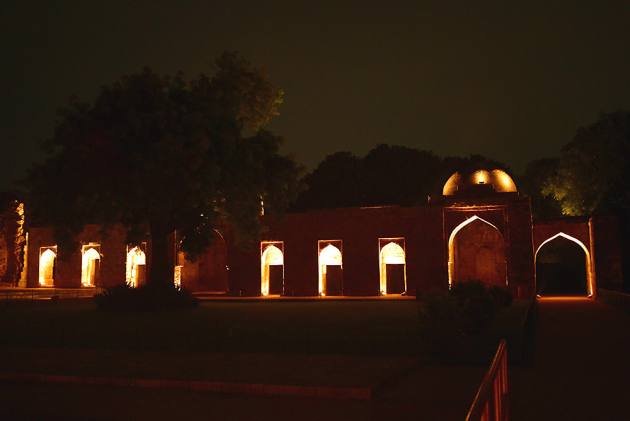 Samadhis may not contain mortal remains but still they are solemn relics which mainly perpetuate the last rites of a distinguished entity. Mahatma Gandhi, Jawaharlal Nehru, Indira Gandhi, Rajiv Gandhi, Jagjivan Ram and Chaudhari Charan Singh -- all have such memorials which are greatly revered. However, there are much older samadhis whose history is lost over the centuries. An example of that is the Rajput ones, particularly of Jaipur.

In Delhi, dating back to those times, atop a mound behind the Punchkuian Road cremation ground in Jhandewalan Extension is believed to be the samadhi of Bela Sidhi, the daughter of legendary king Prithviraj Chauhan. She committed 'sati' after her husband was killed in a battle that was fought in the area between Panchkuian Road and what is now the Pusa Institute.

The place was cut off by a rocky terrain back then. After the battle raged nearly the whole day, word was brought late in the evening to the Rajput ladies waiting under a clump of trees that the chieftain was dead and the battle lost. Bela's husband's name is not known, nor that of his adversary. It was solely because of Bela that her husband could lay claim to fame and it is she who is the riddle of our curiosity.

In the realm of controversy, some people believe that Prithviraj Chauhan had built the Qutb Minar for Bela, so that she could view the Jamuna every day as she dried her long hair in the morning sunshine. Conceding this claim with apologies to Qutbuddin Aibak and his successor Altamash, one can picture the young Bela busy with her coiffure amidst her maids of honour.

It must have been an elaborate process for the Rajput princess who had hair combed tight and then made into a pigtail with a tika or jhoomer, perhaps encrusted with a diamond in this case, conspicuous on the forehead and then an odhni to cover the head.

Bela is a beautiful flower according to an old lullaby, greatly loved by God (and men, of course) which had to sacrifice its life because the Maker wanted it for his celestial garden. Princess Bela, named after the flower, must have been beautiful as well. And she also sacrificed her life for her lord and master. This act of hers has not been forgotten for women still pay homage to this loving wife and a revered sati.

Climbing up on the mound and talking to an old sadhu standing under the shade of two peepul trees, one is transported to medieval times, even though it is hard to swallow his claim that the trees date back to that period. But then, the sadhu has his own brand of history, according to which Bela was the daughter-in-law of Prithviraj Chauhan, though he conceded that she too committed sati.

Be that as it may, the samadhi legend has come down from pre-Mughal times, probably the Delhi Sultanate period. The belief is strengthened by the fact that a mandir, which commemorates Bela, still exists in Jhandewalan.

It is strange that hardly any building of note was erected in the Karol Bagh area during the heyday of the Mughals. Construction was confined to the northern and southern parts of the Capital. In those days, the ridge cut off most of this area and for a long time it remained isolated.

The name Jhandewalan was given during Shah Jahan’s reign, though prayer flags--jhandas--had been offered at the ancient Vaishnodevi temple there prior to that too. It has now been renovated and is today the object of much devotion. The construction of such temples followed a dream in which the Devi commanded that her idol be installed and worshipped. Sometimes the dream came to several neighbours, and at times it was the king who dreamt it.

Animal sacrifices to the Devi were a common ritual. That such sacrifices took place in Jhandewalan is evident from the thicket behind the temple area, much of which has been cut down to accommodate flatted factories. Even as late as the second decade of 20th century, Jhandewalan was a forlorn place.

Ruffians made it difficult for women to venture there after sunset and so offerings were made only in the day, when armed men accompanied them. At present, the women who come for darshan need no escort. The offering contains, besides other things, a chunri or veil and bangles. Red is the colour that predominates, though the bangles are generally green. The pujari receives the plate of offering and gives a small portion of its contents as prasad to the devotee.

So the legend of Bela continues to be perpetuated. But the existence of her samadhi continues to be a riddle. Did her husband’s enemies desecrate his body and left it to rot or did Bela manage to retrieve it? If so, did his samadhi also exist once in the Panchkuin Road cremation ground like Bela’s?