SC Order Towards Making ‘Food For All’ A Reality

The stranded migrant crisis caused by the national lockdown, imposed with little notice, in March 2020 shook the conscience of the nation. 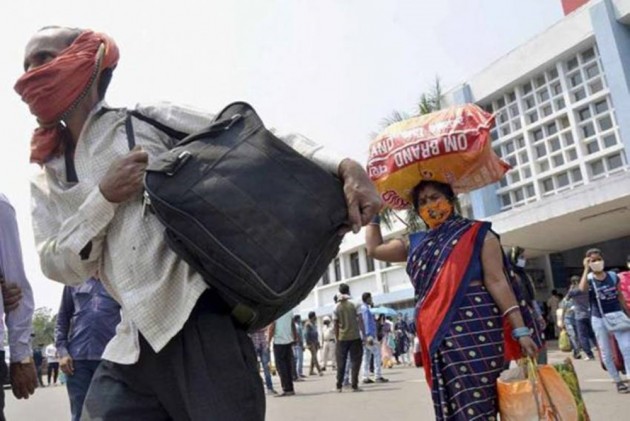 On June 29, the Supreme Court passed an important judgment providing relief to migrant and unorganized sector workers in a case where it has taken suo moto cognizance during the national lockdown last year. The directions of the court in this matter mainly address four aspects – speeding up and completing the registration of unorganized labourers/migrant workers under the National Data Base for Unorganised Workers (NDUW Project); allocation of additional food grains by the central government to states for distribution to migrant workers and states to put in place such schemes including community kitchens; implementation of the One Nation One Ration Card (ONORC) scheme by end of July and undertaking an exercise “to re-determine the total number of persons to be covered under the Rural and Urban areas of the State” under Section 9 of the National Food Security Act, 2013. Each of these is an important order, which if implemented in the true spirit, can help bring millions who are currently outside the net of the social protection provided by the state but are the most affected by the Covid pandemic and the resultant economic slowdown.

The stranded migrant crisis caused by the national lockdown, imposed with little notice, in March 2020 shook the conscience of the nation. Thousands of people suddenly found themselves vulnerable to homelessness and starvation and set out on foot to get back to their homes where they could get some security. This exposed the precarity of employment in our country and led to a lot of outrage in the media and the public. Unfortunately, though after few short-term measures such as arranging for transport and providing some Adhoc rations, these migrant and informal sector workers have been soon forgotten.

Several surveys conducted towards the end of 2020, however, showed that incomes and livelihoods had not yet revived to pre-covid levels for most in the country. The State of the Working India report of the Azim Premji University estimated that over 230 million people had fallen below the minimum wage poverty line amidst the pandemic. Another survey by the Centre for Monitoring Indian Economy (CMIE) reports that 97 percent of Indians have lower incomes post the pandemic. All of this has had one fallout which is of increasing food insecurity and a larger number of people dependent on state support to access nutrition.

Implement ‘One Nation, One Ration Card’ Scheme To Ensure Migrants Get Ration: SC To States

India has one of the world’s largest programmes of provision of subsidized rations through the Public Distribution System (PDS) and this has also been central to the government’s relief response during both waves of the pandemic. Under the Pradhan Mantri Garib Kalyan Anna Yojana (PMGKAY) those people who held NFSA ration cards were given free foodgrains (5kg per individual per month and 1kg pulses per household per month) for eight months in 2020. In April 2021, once again the PMGKAY was revived in response to the second wave, initially for two months (May and June) and later extended until Diwali. However, in 2021 only free foodgrains were included, but not pulses.

The field surveys conducted after the national lockdown found that most of the beneficiaries of NFSA did receive these free rations, although there were some issues related to regularity and quality. Yet, one of the concerns that have been raised repeatedly since the early days of the pandemic is of those who are excluded from the PDS for various reasons. This could either be the case of migrant workers who might have ration cards in their home states/villages but are still unable to get any support because they are presently located elsewhere. It also includes those who need subsidized rations but do not have ration cards. The ONORC is supposed to resolve the former problem because, under this scheme, a beneficiary who has an NFSA ration card using her biometrics can now take ration from any shop even in a different state. Officially, the scheme has been operational in all states except four (Assam, Chhattisgarh, Delhi, and West Bengal) and the SC order directs that it be made available by the end of July in all parts of the country. The question to ask however is whether the implementation of ONORC would indeed solve the problem of exclusions from the PDS.

Firstly, in the case of migrant workers who have ration cards, there are still several implementation glitches about the ONORC. The Aadhaar number of the beneficiary has to be seeded and the ration shops must be e-POS enabled. The failures of biometric authentication, as well as network issues, have been well documented. Several logistical arrangements need to be put in place, which is quite complex. The entitlements currently vary across states and the ONORC would cover only those with an NFSA ration card but not a state ration card. There needs to be a dynamic stock and inventory system for every ration shop. It is not clear whether these are in place. From the data available, it does seem that the scheme has had a slow start. For instance, in June 2021, there were only 16,039 interstate transactions under the ONORC (impds.nic.in). There were 1.26 crore intra-district and 8.7 lakh inter-district transactions. It would be a big leap to assume that intra-district transactions which are the most in number reflect migrants accessing rations – these are most likely people using portability for other reasons such as better services, easy access, and so on. Therefore, at least so far, the ONORC has not been very effective in reaching out to migrant workers. And given the concerns of Aadhaar-based exclusions, the ONORC might not be a very inclusive system.

The bigger concern is those without ration cards. In this regard, the other less covered order of the SC, regarding updating ration lists is significant. The NFSA mandates that 75% of the rural population and 50% of the urban population must be covered by PDS as priority households. Based on the 2011 Census, the Centre has therefore determined the number of NFSA beneficiaries be 81.3 persons. If the projected population figures for 2021 are used, which is what the implication of the SC order would be, then at least another 10 crore persons would have to be included i.e. more than 2 crore households would get ration cards. This could be a game-changer in reaching rations to the people and would also take us closer to a universal PDS (with the exclusion of the rich) is desirable both from the point of view of inclusion as well as reducing leakages.