Irreverent, hard-hitting, extremely creative trolls have become the most effective means of political communication among the Malayalees. They entertain, educate and make people think. 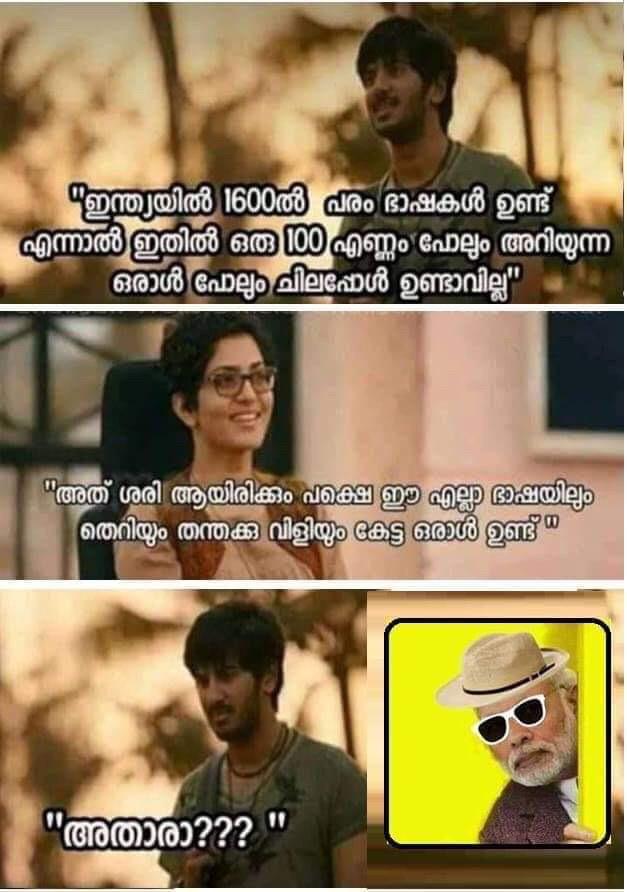 Social media, despite being a wasteful distraction for the most part, is immensely entertaining and educating at times. Social media spaces in Kerala revived over the past few years a facet of the Malayali mind that had seemed almost extinct – sense of humour and capacity for satirical commentary. From producing some of India’s finest cartoonists to developing a cottage industry of humorous writings of varying standards, laughing and making others laugh has been a hallmark of Keralan culture for centuries. This propensity for creative subversion, a persistent ‘itching to deride’ - to borrow a phrase from Alexander Pope – began to decline a couple of decades ago. The advent of Prime Minister Narendra Modi on the national political scene and the moves by the Sangh Parivar to strengthen their foothold in Kerala, however, have helped the Malayali regain her sense of humor and satire.

This return of humor is nowhere more evident than in the hundreds of trolls posted and going viral on Malayali social media spaces. Consider the funny troll that appeared on the Valentine’s Day a week ago: “Can you love me the way a Sanghi loves Modi? Loving without any reason, without expecting anything in return, blindly…..” The numerous comments on the controversy about the Indian Railway’s decision to reserve one seat for Lord Mahakal on the newly launched Varanasi-Indore Kashi Mahakal Express were as politically astute as they were witty. One of them involved a hilarious conversation between Parasuram Express and Nizamuddin Express, in which the former is asking the latter not to come anywhere near it and pollute Hindu sanctities. 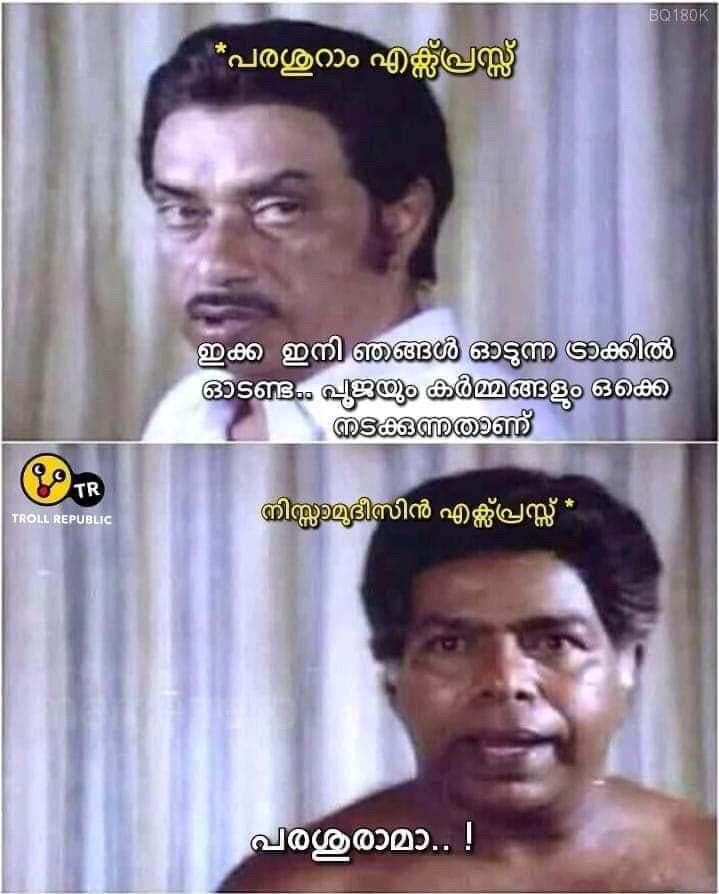 One social media user conjured up a set of possible announcements on railway platforms in the future, including: “Shree Kailasanatha Parama Shiva Express is now entering platform No.1. Non-Hindus and menstruating women may please move far away from the platform.” “The Hara Hara Maha Vishnu Express, scheduled to depart at 9.45, will leave the station at 10.45 after the period of Rahu Kaal.” “Train No 15031 is now approaching platform No.3. All women are requested to queue up at counter No.2 for menstruation checks.” “Non-Hindus, non-vegetarian Hindus, menstruating women and atheists are allowed to travel only in general compartments”.

The building of a wall allegedly to hide Ahmedabad’s slums from Donald Trump occasioned the dissemination of dozens of trolls. From a wife suggesting to her husband to take a bank loan to build a wall around their dilapidated house to the shock of Modi when told at the last minute that Trump wanted to fly from the airport in a helicopter to the city, the merciless attacks shredded to pieces the euphoric narratives on the Gujarat model.  One of the best in the series was this comment: “Thank God Modi invited Trump only to his city and not his home. If Trump were coming home, he would have hidden away his mother and presented Aishwarya Rai in her place!” Most of these trolls use stills or videos drawn from Malayalam films past and present, featuring top actors (mainly comedians) with the suitable expressions needed for the occasion.

Another troll on the wall building is difficult to translate, as it is a word play using the Malayalam word Cheri, which could mean both slum and side (as in taking sides). Cheri Chera Nayam is the Malayam word for non-alignment. In the troll, Nehru is described as the proponent of non-alignment (Cheri Chera Nayam) whereas Modi is described as the originator of Cheri Kaana Nayam (the policy of hiding slums).  A recent news report stirred up much trolling about VD Savarkar. A thief entered a home in the dead of the night. When he learnt that it was the home of an army man, the patriotic thief left a letter of apology, betraying his political leanings!

Finance Minister Nirmala Sitharaman was at the receiving end of many a troll. One featured her as a hawker, shouting: “Onions, bananas, potatoes, air India, BSNL, LIC ……” A person in RSS uniform approaches her and asks: “Do you have a fresh Supreme Court please?” There is one in which a flabbergasted Trump is frantically searching for Air Force 1 at the end of his trip to India. A gleeful Nirmala Sitaraman tells him that she has sold the plane along with the pilot! 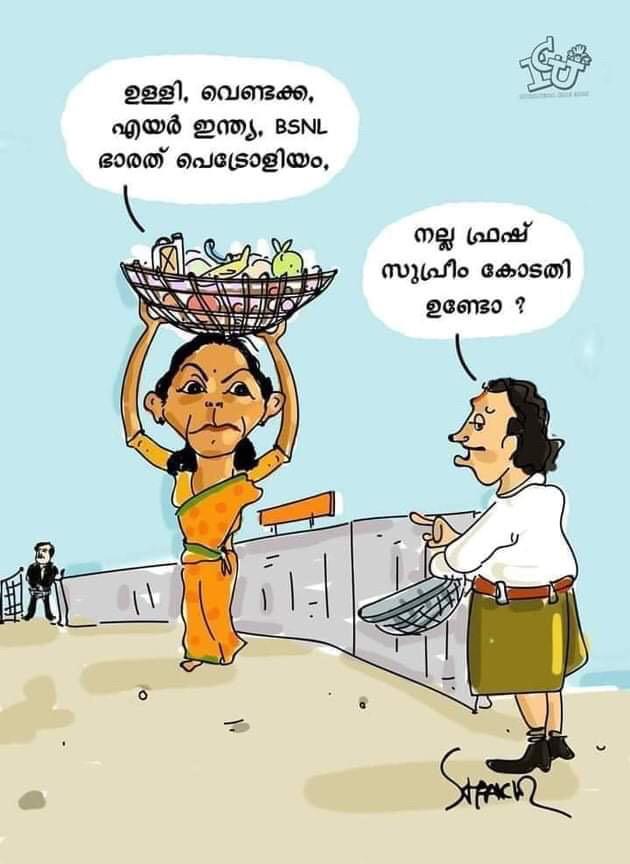 When girl students of Gargi College in Delhi alleged that drunken men shouting ‘Jai Shree Ram’ entered the college and masturbated at them, someone posted a hilarious troll. In it, one of the men involved in the incident laments the colonization of the Indian mind saying: “When Sunny Leone does the same saying oh god oh god, you all are happy. When I do the same shouting Jai Shri Ram, you demonize me. This is what the likes of Nehru did to our culture!”

Irreverent, hard-hitting, extremely creative trolls have become the most effective means of political communication among the Malayalees. Of course, humorous trolls are not a Malayali monopoly in these troubled times, but they have become particularly popular among Keralites across the world. They entertain, educate and make people think. Supporters of the Sangh Parivar in Kerala are baffled and find it impossible to counter them, except by offence taking, which in turn provokes more scorn. Since the authors of these trolls mostly remain anonymous, it is impossible to indulge in what the Sangh’s cyber warriors are best at: personal vilification and abuse.

The anonymity of the trolls is a pity for one would have loved to know who these brilliant people actually are. They fight hatred and communalism day in and day out, communicate cogent ideas to a far larger number of people than any article could possibly do, and make everyone have a hearty laugh. They are a bunch of passionate patriots protecting Kerala from pseudo-nationalists and zealots. I salute their commitment to the idea of India!

(Shajahan Madampat is a cultural critic and commentator, writing in English and Malayalam. His new book “God is neither a Khomeini nor a Mohan Bhagwat: Writing against Zealotry” came out last month. Views expressed are personal.)