The film shows off plenty of intelligence and efficiency, but not enough depth of character, and the main players seem to be left to be fleshed out by the respective actors alone. 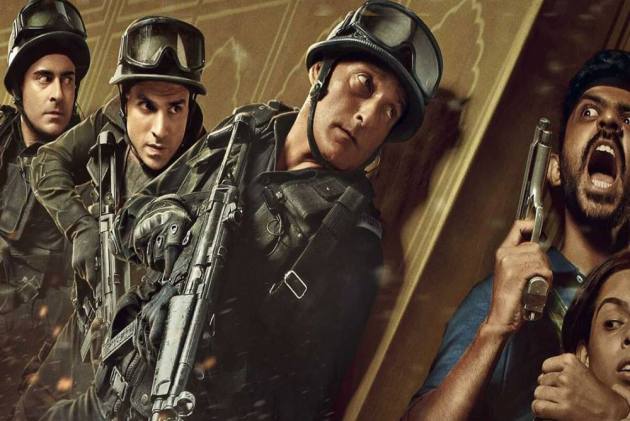 There’s something about films on terrorism that never fail to excite both filmmakers and actors. With the current obsession of The Powers That Be to highlight some of the heroic deeds of the armed forces against – you guessed it right- the Muslims, there seems to be no dearth of subjects to delve into. State of Siege Temple Attack is yet one of the many subjects that is most likely to find an instantaneous appeal. With kohl-eyed Islamist terrorists and a palpable power struggle at the helm between commandos and 4 extremists, the 110-minute film straightaway gets into action right from the opening scene itself. And thereafter, it’s action all the way!

One gets a tad confused when there’s a disclaimer that the film is a work of fiction, and in the same breath, it also says that it is “inspired by true events,” which, obviously, amply suggests that the writers William Borthwick and Simon Fantauzzo and the director have thrown caution to the winds and created their version of a “true story.”

When in 2002, two armed men attacked the Swaminarayan Akshardham complex at Gandhinagar in Gujarat and killed 30 people and injured more than 80, India’s tenuous security system got exposed once again. Thankfully it was the NSG’s (National Security Guards) intervention that ended the siege the next day, killing both attackers. Six other accused were also later arrested by Gujarat Police. Subsequently, about 12 years later, in 2014, the Supreme Court of India acquitted all the six prisoners of all charges and pulled up the Gujarat Police for shoddy investigation in the case.

With such dynamic material serving as perfect grist to a suspenseful thriller narrative, presenter Abhimanyu Singh and director Ken Ghosh could have had a winner on their hands. But for the reasons best known to them, the creative team decided to fictionalise the true story. And so, Akshardham becomes Krishna Dham and the then Gujarat CM Narendra Modi becomes Manish Choksi (Samir Soni), for no discernible purpose. The details of the actual incident too, are tampered with, and you are left asking why such a film is being made in the first place.

Thankfully, it gets straight into the action without fuss, and so, you don’t get enough time to reflect on the film’s claims and disclaimers, though to be honest, various complications and surprises constantly make you feel intrigued as well.

Perhaps the film was planned as a tribute to the highly trained National Security Guards except that the primary focus is on Commando Hanut Singh (Akshaye Khanna) who while heading a mission has to rescue a minister’s daughter. Though he manages to save her, his foresight fails and the operation is termed unsuccessful, as another army captain (Akshay Oberoi) gets killed. Unpardonably, Hanut is branded a failure.

Some nine months later, when the action shifts to another attempt at killing more innocent people in Gujarat by the same terrorists’ outfit, you would want to know the motive, or the prelude to such a heinous retaliation. Sadly - though unsurprisingly - the origin and root cause of such vengeance is merely mentioned in passing: the Gujarat riots in 2002!

And out of the blue, you find an Ahmedabad temple being the target of the strategic attack. Around the same time, the chief minister (Sameer Soni) is gearing up to address a conference of industrialists in a hotel where the NSG is in charge of the security.

The film then cuts to Hanut and his heroic act that would redeem him of the ignominy that followed his earlier botched attempt.

Almost simultaneously, when a group of men invades the temple holding its staffers and visitors hostage, obviously, it’s Hanut who offers to use his prudence to fight off the dreaded terrorists. Needless to add, his predictions about their manoeuvres is a result of his amazing prescience.

For all those who get a kick out of watching a bunch of unlawful extremists belonging to a certain community getting ‘poetic justice’, the film is pleasing enough and worth the time spent, so what if most essential elements of “a true-life tragedy” have been glossed over?

The drama shows off plenty of intelligence and efficiency, but not enough depth of character, and the main players seem to be left to be fleshed out by the respective actors alone. The atmospherics are in accordance with the writers’ partisan approach to the horrific disaster: with television channels blaring about peace post the Gujarat riots, and due care being taken to help viewers identify the actual attack and willingly suspend the disbelief to sit and enjoy remarkably photographed and edited shots. As an afterthought, a conscientious Muslim character is abruptly made to mouth lines lest we call it a biased depiction. As a result it feels rather quaint and forced nd very filmi.

What keeps your interest is Akhsaye Khanna’s sincere efforts to make all his scenes look as convincing as possible. The other actors (Pravin Dabas, Gautam Rode, Manjari Phadnis nd Samir Soni) have such tiny and inconsequential characters that they look incidental to the action going on.

At the end of the film, it’s a mockery of history as you wonder the laughable transposition of a factual calamity getting cloaked and a grave slice of recent past doesn’t get accurately chronicled.

Most likely then, this one will languish in obscurity and be one half-forgotten film!