Subsidised JNU Fees Is Passport to Opportunity And Empowerment

Why JNU students are protesting over a hike in fees. One way to look at it is that JNU is to social engineering what the IITs are to mechanical, electronics and civil engineering 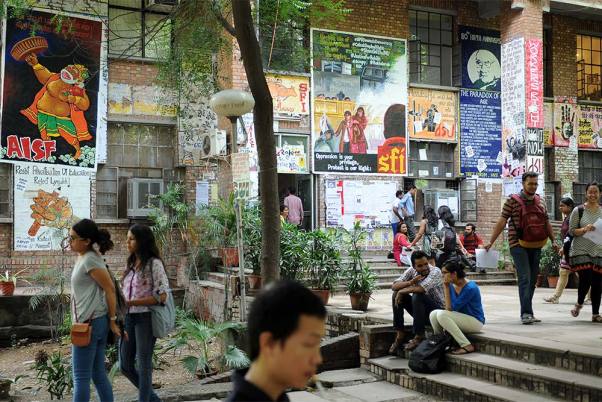 We can easily get lost in simple statistics that encourage genteel middle-class outrage on Jawaharlal Nehru University. The hostel charges are extremely low compared with other leading universities. Students stay for long durations doing PhDs that few people can connect with, and its professors enjoy long tenures and do things other than imparting skills.

JNU has decided to raise its hostel fees from Rs 20 to Rs 600 for a single occupancy room, while for double occupancy it will be Rs 300 as compared to Rs 10 earlier. But such numbers do not mean much in the larger context, as students in the university erupt in an uproarious protest against fee increases.

Go deeper, and the questions to ask are: Why can't higher education be subsidised in a world where tycoons default on loans amounting to thousands of crores and smile to TV cameras in faraway countries? Why do MPs and ministers enjoy subsidised transport and food and accommodation?

There are no easy answers when the picture gets bigger, but there are some simple truths that help us understand why JNU students are protesting over a hike in fees. One way to look at it is that JNU is to social engineering what the IITs are to mechanical, electronics and civil engineering.

Look further and you will find JNU has departments in everything, from nuclear physics to life sciences and education, apart from the more visible ones in economics, political science and sociology. The sprawling campus imparts education with a free-thinking atmosphere that encourages a quest for knowledge on a range of subjects. More importantly, it raises questions on matters of public interest and social policy.

Such a world is admittedly an enviable luxury for those who take loans to do MBAs or acquire engineering degrees from mushrooming private institutions that charge a bomb. The MBA-or-techie mindset is a simple one: you get skills, you do work for someone and you earn good money. JNU is not about that. It often produces scientists, researchers, social workers, policy-makers and political leaders whose purpose in life focuses on priorities that need not necessarily be commercial.

The question arises as to why this should be subsidised by the state. The answer is simple: the social impact of liberal arts or physical science education that focuses on pure research can have a larger positive, long-term impact on society. If you need proof, look no further than India's finance and foreign ministers in the current government, who are proud JNU alumni.

Academic research shows that the level of subsidy of education in India is not high compared with either developed or developing countries. That includes education in the prestigious IITs.

All that still leaves us with nagging questions: Why should JNU students in hostels pay less than fellow students who rent shanty rooms nearby? Why should PhD scholars use hostels as cheap accommodation for years on end? Why do PhDs take so long? These are questions that can and should engage the minds of the vice-chancellor or bureaucrats in the ministry of human resources.

That, however, cannot take away some basic facts about JNU: It is a premier centre of learning, not simple vocational skills. The learning need not be in classrooms, but can be from other sources including informal talks, coffee-table debates or even protests on the sprawling campus. A protest can be to a political science student what a laboratory invention model is to an engineering student.

Two years ago, JNU's vice-chancellor Jagadesh Kumar stirred controversy when he proposed the installation of a battle tank on the campus, or a battleship or an aircraft, as a symbol of national defence.

But then, JNU is not the National Defence Academy. Its mission is to encourage a scientific temper, a favourite expression of the man after whom the institution is named. We need to ask: If JNU is to have a tank, why is not a statue of Nachiketa, the boy wonder from the Upanishads who asked difficult questions, not there in Khadakwasla near Pune?

These are rhetorical questions. It is key to remember that JNU is a product of a democratic, civilian culture that promotes egalitarian values enshrined in the Constitution, including that of social justice. A cheap JNU stint is to its scholar what a cheap MUDRA loan is to a self-employed person: An instrument of empowerment and opportunity. It helps one pursue a career in the social sphere, be it in an NGO, a university, a political party or in the government. Everybody need not be trained to work in an Infosys or a Microsoft.

The fact that a huge number of JNU students come from the interiors of India or belong to less advantaged sections of the society gives it a tinge of social justice.
Debates and questions are not new to the land of the argumentative Indian, but we now have a national-level political administration that has a tilt towards skills and discipline, which militates against the spirit of free-thinking and ferment that are considered essential in the civilisational spirit of nation-building. No wonder JNU's students are on the streets.

(The writer is a senior journalist and commentator who has worked for Reuters, Hindustan Times, The Economic Times and Business Standard. He tweets as @madversity. Views are personal.)