Can faith and scholarship live together with religion as the common archive? This is a profound question to which there is no easy answer. 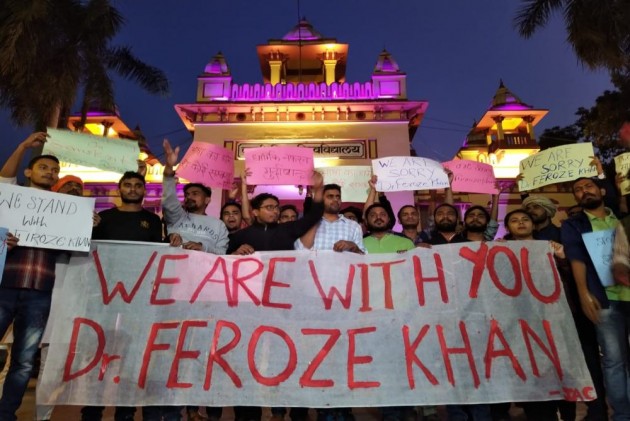 “A muslim teacher teaching Sanskrit is a happy moment for us as a student or as a Hindu also. I myself have a diploma in Urdu.”

An anguished student from Benaras Hindu University wrote to me after I wrote an article criticising the student protests against the appointment of Firoze Khan as an assistant professor of Sanskrit in the Sanskrit Dharma Vijgyan Sankay.

He went on: “They are suggesting that transfer Firoz Khan ji to the Sanskrit dep for teaching but the whole thing propagated in media is totally different. Leaders like mayawati, shashi tharoor, paresh rawal…priyanka gandhi and many more all are saying that teaching Sanskrit has no religion which is not the matter of this protest.”

In the first wave of news that spread nationwide, this distinction was lost to many: that between the teaching of Sanskrit in a department of language and literature, and its teaching in an institute of theology. The student’s letter, polite but raw with pain, opened up the nuance, that has since also attracted national attention.

Is there a difference between teaching Sanskrit in a literature department and teaching it in the context of theology? The real question hides close behind: Does one need to be a believer to teach religion at a university? Is a religion or the culture around it, a field of study or practice?

Is the Department of Sanskrit Vidya Dharma Vigyan (SVDV) at BHU something like a theological seminary in the Christian sense? A seminary can train secular religious scholars, but its training can lead to a career in the Church. Can Hindu priests be trained in a university seminary?

This was a foundational question for the modern research university. Driven by this question, Immanuel Kant wrote The Conflict of the Faculties. There he distinguished between the “higher” and the “lower” faculty. The higher faculty included theology, law and medicine, intended, respectively, to train clergymen, lawyers and physicians.

This faculty derived its practice not from the intellectual stakes of the discipline but from laws laid down by relevant institutions, including the state. They trained what Kant called “the businessmen or technicians of learning”. The Conflict of the Faculties was a defining influence behind the University of Berlin, the earliest model of the modern research university set up  in 1810 by Wilhelm von Humboldt, a close follower of Kant.

The symbolism of the terms “higher” and “lower” is deceptive. The higher faculty essentially make up the professional schools. The lower faculty, in today’s language, would be the Faculty of Arts and Sciences, what in India is called the General Stream. The “lower” faculty actually has unlimited intellectual freedom that the “higher” faculty does not have, being fields of professional practice and therefore subject to state and licensing regulations. Considering the higher faculty addresses people’s need to “fix” their lives, be it health, property or salvation, such regulations become inevitable.

This is, for Kant, the key difference between the clergy and the religious philosopher, or the Biblical and the Rational Theologian: the former works with laws based on faith, the latter, through secular questioning and interpretation. The official cannot play the philosopher’s role, and vice versa; one is concerned with authority, the other with truth; one is a practitioner, the other a scholar.

However, the seminary, as it exists today, can train one for a life of secular study as well as for a career in the Church. These functions are not strictly distinguished or demarcated. Likewise with the Shastri programme. It is the equivalent to a Bachelor’s degree; the Acharya approximates a Master’s degree, which corresponds with liberal degrees in the modern university system.

But they can be either liberal or vocational; they qualify one as a scholar of Hinduism and can also enable one to be a priest or a religious teacher. Much like the Western theological seminary, it combines scholarship with vocation; religion as a liberal art as well as a profession.

The ideological opposition to the appointment of Firoze Khan might be understood in the overlapping of the scholarly and the vocational functions of this education. A non-believer can be a secular scholar of religion, in the sense of a historian, a philologist, or even a cultural anthropologist. To become a priest, one can see why faith is called for.

A group of current and former members of the faculty at BHU have signed a letter to the President of India, Ram Nath Kovind, also a visitor to the university, supporting the student protests against the appointment of Firoze Khan to the SVDV department.

The submission argues that this appointment flouts the clause of the 1915 BHU Act that “only Hindu Sanatans and Buddhists, Jains, Sikhs can participate in teaching and studying at SVDV faculty.” If this rule of faith is violated, it states, “the acharya parampara would become void.”

According to this letter, a crucial professional implication of this violation would be that students certified by this program would have trouble finding employment in various Hindu temples.

Still, the question remains: to teach language and literature in this faculty, do we need a practitioner of Hinduism or just a scholar? A scholar who may hail from a different faith, or perhaps be secular?

Can faith and scholarship live together with religion as the common archive? This is a profound question to which there is no easy answer.

(The author is Professor of English & Creative Writing at Ashoka University. His most recent book is The Scent of God-2019)