The Lessons We Didn't Learn From The Simlipal Fire

We Indians seem more concerned about fires in Australia and California than the ones ravaging our forests. And it'll cost us. 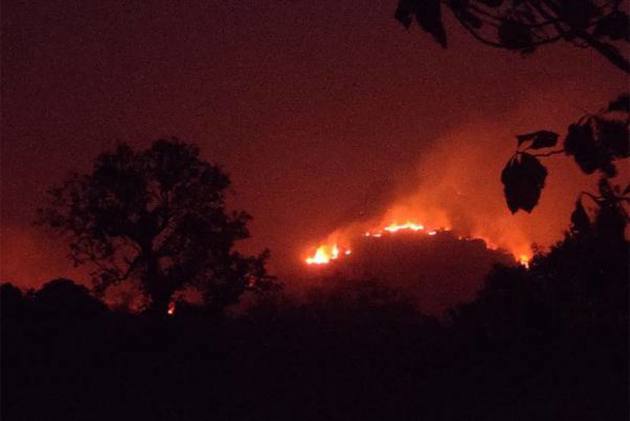 The massive forest fires that recently ravaged Simlipal National Park in Odisha may have been doused by rain and hail, but the questions continue to burn.

The mainstream television news channels, busy covering the campaigning for the assembly elections in West Bengal and Assam, ignored the fire. Some concerns were raised on social media about the fate of the indigenous tribes in the state, whose livelihood depends on produce from the forest. 'Down To Earth' magazine reported that forest officials are intimidating the locals, accusing them of purposely setting the forest on fire. Several environmentalists and forest guards have accused them of burning leaves that sparked the blaze, an allegation refuted by the tribal population. The Odisha government claimed there has been no loss of life due to the fire, without clarifying whether it was referring to the loss of human or animal life. But apart from the suspicion that many animals might have perished in the inferno, there are concerns that those that fled the forest to escape the flames could fall prey to hunters and poachers outside their protected habitat.

India has already witnessed three major forest fires in 2021 but no one seems to be concerned. In January, forest fires in Himachal Pradesh's scenic Kullu and Shimla districts burnt for days before being brought under control. In the east, forests along the Nagaland-Manipur border also raged for two weeks before NDRF and Army teams were sent to douse them.

The fact that very few of us knew or cared about these massive fires underlines the fact that Indians are not really worried about the impact of Climate Change.

Wildfires are an essential part of ecological systems in certain forest habitations that catch fire in the dry season. But this natural phenomenon has multiplied manifold in recent years due to the unusually hot dry spells sparked by Climate Change.

Apart from this, fires are often deliberately lit to clear land for humans or drive animals out of a particular place often go out of control, endangering entire species of animals. Massive wildfires have become an annual ritual across the globe.

But while the Beirut Blast and Covid-19 pandemic come out as clear instances of threats to human life, the world seems unaware of the impending devastation that climate change will bring. Environmentalists who try to flag this clear and present danger have been asked to work on their "anger management problem" by world leaders.

In India, the Environment Impact Assessment (EIA) Bill tabled in Parliament left environmentalists howling in protests. anger. The bill aims at easing rules for industries that breach environmental laws, thereby putting economic development ahead of long-term environmental damage. This sheer ignorance of those who make laws on one of the most important 21st-century issues is perhaps due to lack of awareness, as fuelled by the lack of awareness, as shown by the general apathy both among the government and the public towards the fire in Simlipal.

Indians wake up to the news of an orange sky due to wildfires in California, fret over bushfires in Australia, and express outrage over the Amazon forest fires on social media. But when fires burning for nearly a fortnight wipe out one-third of India's revered national reserve, nobody seems to care.

A lot of the environmental challenges that threaten our world, including global warming, can be slowed down if not reversed if we humans, said to be the most intelligent animal species, paid more attention to how our daily activities affect our natural surroundings.

We can initiate conversations in order to raise awareness and work on minimising our carbon footprint as early measures to reduce the harm already done. We can use the power of social media to support the work of activists who highlight the worsening condition of our environment, and thus raise awareness. And finally, we can use collective pressure and outrage to call out those who are exploiting our planet for short term gains without any concern for the long term damage. And we need to do it now, before it is too late.