The Political Parties do not see the Middle classes as an electorally decisive force and hence a silent indifference to it. 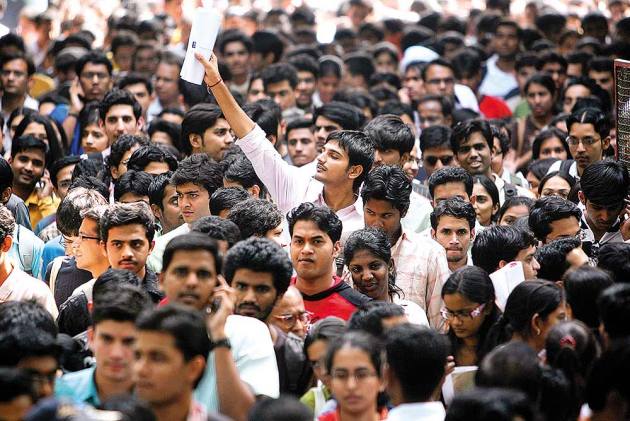 There are note banks at the top and the vote banks at the bottom. In the middle of this pyramid, lies an educated, garrulous and split entity called the Middle Class – People like us  or “ you and I ” dear reader- pretending as if we matter. Aware deep down though that we are, by and large irrelevant in the national discourse. Politicians, pragmatic and shrewd as they are, have long realised that middle class by the situation it finds itself in, is primarily occupied in concerns of daily grind and aspirations. In a country with a hiccupping economy, its battle to ‘keep up’  also forces it to remain largely self-absorbed. They have to protect their jobs, EMIs, insurance premiums, children’s education in the middle of rapid changes in the world around them  which in actuality they scarcely understand. The old sacrosanct professions are no longer that holy and many Industries have collapsed. Many Brick and mortar businesses have become redundant. With that valued skills which families prided in useless. Holy grail of civil services does not evoke that awe and inspiration. Journalism as a profession is struggling with Industry seeing a steady shift on way content is produced, distributed and most importantly valued. Typical Engineer-Doctor-Lawyer, another bastion of the middle classes paradigm works only for the few at the top. In general, it is an endless slog to somehow keep up. World over are  New generation technological changes whose import and consequences we have no wherewithal to estimate, are changing things as never before. In an impossible race, they are relentlessly increasing the digital divide and wealth allocation.

If we speak politically, in these interesting and uncertain times, The middle remains split and deeply divided. It also vacillates - from Congress style liberalism to BJP Style Hindutava with equal ease and so it cannot be fitted into an assured voter paradigm. It is drifting away from politics and votes infrequently. Their engagement with the political process is superficial and limited at times to venting in their own chosen echo-chambers on digital platforms.

In short, if you are a vote seeking politico, a member of Middle class is a species which electorally cannot be trusted. So essentially,  not really  worth wasting your time on. With this the Political Parties do not see the Middle classes as an electorally decisive force and hence a silent indifference to it.

Most leaders in Indian Politics today come from either politically entitled or  wealthy backgrounds but  many are also sons of soil- vernacular speaking, from poor backgrounds but the ones who are real street fighters, crowd mobilisers and vote catchers. Ironically, the few who do indeed come from the middle classes do not at all focus on the middle class issues lest they should look to be ignoring the poor. Middle class as it is has cease to be a pressure group and in the new IT  and services led economy, the younger set are at a loathe to engage with political discourse except fleetingly. Left to itself the entire middle class will perhaps like to migrate to the chosen few nations of the west or their  older ones will like to see at least  their kids do so. So while making big bucks in the country is the passport to success  for the rich, green card or Canadian visa is its nearest substitute for the middle.

Now you may ask what or who constitutes the middle class? There are a number of differing criteria depending on which one you follow. For instance,  IMF in its World Economic Outlook 2020 says per capita PPP adjusted GDP for India at USD 9027 per annum or above is what makes you a middle class. In simple words Rs 56,000/- per month income. OECD and World bank say income of USD10-100 (Rs 7500 to 75000) per month on 2015 price adjusted PPP per person puts you in the middle . Then there is a body of literature which says education, mobility, sub-sets  within the middle class-lower middle, middle-middle and upper middle et al have to be considered. Cutting through these noises, the bottom line all agree on however is that the middle class in India today is around 25% of the population.  With elections decided by winner getting 35-40% votes in our country, it makes little sense to expend political energy on  vacillating, infrequently voting and split down the  middle, middle  class votes. The garrulous Middle class in that sense has voted itself out.

Contrary to perception, Middle class is also no longer a big city phenomenon and tier 2,3 and rural areas have a considerable proportion of it and thanks to growing slumming of our large cities over the years,  the proportion of poor in large cities is also very high. That is why to the bewilderment of the housing societies and Tony colonies, the election results of cities like Delhi, Mumbai, Bengaluru and Kolkata also get decided in the poorer slums of the big cities.

Interestingly AAP, a party which sprouted as a result of the middle class angst against  corruption; a party with very strong leadership base coming from the middle classes was also soon to realise how politically profitable it is to gain the loyalty of the poor people. They have demonstrated that smaller concerns of education, water and sewage lines etc. of large numbers yield a far bumper political harvest than esoteric debates on 370, CAA and  fate of UP elections. The wise and wily politician has realised that it is best to leave the middle to venting and fuming of Whatsapp groups and a mere lip service to their anxieties for the time being suffices. This emasculation of the middle class which no longer serves as an effective mediating group either politically or economically between the rich and the poor is  a fact.

In-fact, more  a tragedy which has slowed down our journey to becoming a progressive  and a civil society.

(The author is an Ex-IPS officer and a technology entrepreneur. Views expressed are personal and do not necessarily reflect those of Outlook Magazine.)