Those Mocking Mansukh Mandaviya, Ravindra Jadeja’s English Are Out Of Sync With New India

We don’t celebrate cricketer Ravindra Jadeja for his English skills. We celebrate him for his all-round cricketing abilities and those trolling him are out of sync with New India’s aspirations. 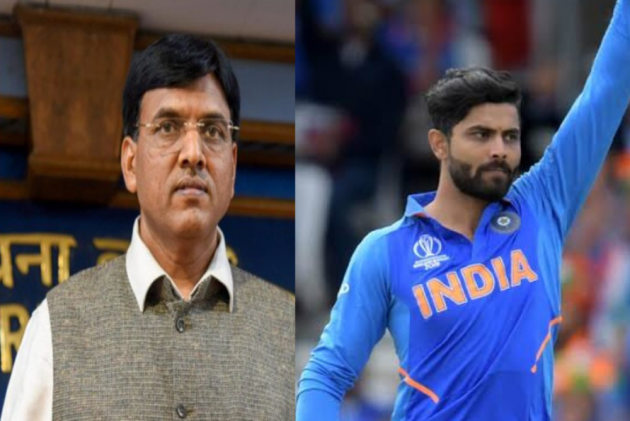 New India is confident of its abilities, is connected to its roots, and is proud of its moorings. And while multiple examples can be cited to symbolize the New India phenomenon, many would argue that M S Dhoni, and the young stars whom he groomed, are some of its shining examples.

Most of these young stars come from humble backgrounds and have roots in small towns. They speak regional languages, including Hindi. English, often, is an acquired language, and not necessarily a strength of these sportsmen. However, they remain stars, whom the New India, loves to adore.

Whether it’s Dhoni’s boys or Mansukh Mandaviya – the new Health Minister, who has been trolled for his English skills -- they are always expected to win for India. And often, they do win. Then, whether they speak in Hindi, or in English, or in broken English, hardly matters. It must not matter.

‘Judge Him By His Work’: Netizens To Those Trolling Health Minister Mandaviya For His English

The debate on our languages, linguistic diversity, the politics around it, and also linguistic chauvinism, has often dominated our public life.

The National Education Policy 2020, hailed far and wide, lays emphasis on regional languages as medium of instruction in educational institutions. Be it Bengali or Tamil, Marathi or Hindi, the bouquet of regional languages enriches India.

However, it’s not that the issue of languages has acquired prominence only now. Way back in 1918, Mahatma Gandhi raised some important questions about Hindi, in a letter to Gurudev Rabindranath Tagore.

Through the letter dated January 21, 1918, the Mahatma asked Gurudev: “For my forthcoming address before the Hindi sammelan at Indore, I am trying to collect the opinions of leaders of thought on the following questions: i) ‘Is not Hindi the only possible national language for inter-provincial discourse and for all other national proceedings?’ ii) ‘Should not Hindi be the language principally used at the forthcoming Congress?’ iii) ‘Is it not desirable and possible to give the highest teaching in our schools and colleges through the vernaculars’? ‘And, should not Hindi be made a compulsory second language in all our post-primary schools’?”

The Mahatma concluded by saying that “if we are to touch the masses and if national servants are to come in contact with the masses all over India, the questions set forth above have to be immediately solved and ought to be treated as of utmost urgency.” He requested Gurudev for an early response.

Tagore replied in three days. He wrote to Gandhi: “I can only answer in the affirmative the question that you have sent to me from Motihari. Of course Hindi is the only possible national language for interprovincial intercourse in India. But, about its introduction at the Congress, I think we cannot enforce it for a long time to come. In the first place, it is truly foreign language for the Madras people, and in the second, most of our politicians will find it extremely difficult to express themselves adequately in this language for no fault of their own. The difficulty will be not only for want of practice but also because political thoughts have naturally taken form in our minds in English. So, Hindi will have to remain optional in our national proceedings until a new generation of politicians, fully alive to its importance, pave (the) way towards its general use by constant practice as a voluntary acceptance of a national obligation.”

Linguistic priorities and debates around them, then, are not just a 2021 story. And the issue has not exercised the BJP alone.

The issue has also often been debated in the BJP and its forerunner Bharatiya Jan Sangh (BJS). From Syama Prasad Mookerjee to Debaprasad Ghosh, A Rama Rao to Dr Raghu Vira to Bachhraj Vyas, all of them have spoken on the issue.

It’s, however, Pandit Deendayal Upadhyay’s speech at the 14th annual convention of the party at Sri Narain Nagar, Calicut that is particularly interesting in the present context.

In his speech at the three-day convention in December, 1967, Upadhyay raised four important points. One, he said that for a nation’s day-to-day work, “the use of one’s own languages is both practical and important from the standpoint of national self-esteem”.
“This year, the Education Ministry at the Centre has taken steps to make Indian languages the medium of instruction in higher education. This decision is in accordance with the recommendations of the Education Commission,” he added.

Two, he said that with the installation of non-Congress governments in various states, “there’s been a welcome increase in the use of their regional languages”.
“With this commitment, in a few months, governance and administrative matters will be decided in people’s language. I congratulate the governments giving due importance to the nation’s own languages,” he added.

Three, he said: “The Jan Sangh has demanded that all examinations conducted by the UPSC be held in regional languages. Those who want to use English can be allowed to do so. But the tendency to let English dominate and not allow Hindi will not be tolerated”.

Four, he said that “as long as there’s a dominance of English in Delhi, Tamil will not be allowed to flourish in Madras”.

The four themes resonate in New India as well.

Yes, there will be debates on whether English, now the second most-widely spoken language as the mother tongue / second language / third language in India, according to the 2011 census, should be treated as another Indian language.

Also, English remains extremely important for the Indian middle class and the entrenched elites, both in terms of influence and as a tool of upward mobility. Precisely for this reason, the Hindi speakers and practitioners of other regional languages, whether in popular media, or politics, or any other sphere of public life, should consider acquiring English as an added language to counter and challenge the intellectual hegemony of the entrenched elites.

To take another example from the cricketing world, when a man-of-the-match from a small-town India thanks his well-wishers in the post-match presentation, maybe in less-than-perfect English, he doesn’t care a damn about what the chauvinists make of his linguistic skills. He, however, remains a hero.

Take, for instance, the example of one of Dhoni’s favourite boys, Ravindra Jadeja. Like Manadviya, he is from Gujarat. And like the Minister, we don’t exactly celebrate Jadeja for his English skills. Jadeja is, and will, however, remain, a rockstar for his all-round cricketing abilities. A 2012 video shows Narendra Modi, then Gujarat CM, speaking highly of Mandaviya. India, then, expects the Minister to perform, and, much like Jadeja, dismiss those mocking his English skills with the contempt they deserve.

As for those attacking Mandaviya, they come across as losers caught in a time warp, so out of sync with New India, its priorities, and aspirations.

(The writer, a JNU alumnus, is a political analyst. Views expressed are personal and do not necessarily reflect those of Outlook Magazine. Feedback can be sent to skjthe@gmail.com)