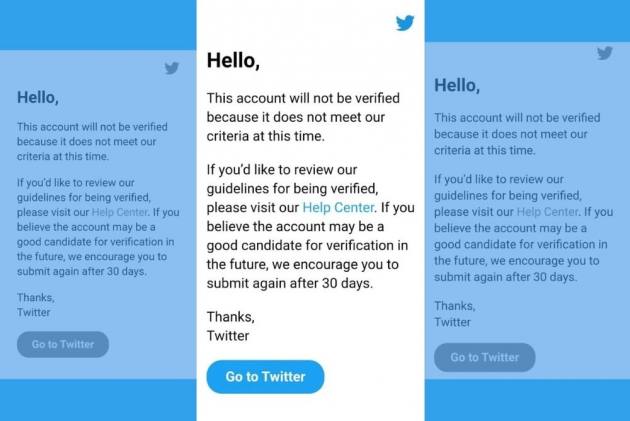 The latest news about me is that I have been ticked off by Twitter.

Having opened a Twitter account some 10 years ago, and been fairly active on the social media platform for the last couple of years, I applied for its Blue Tick approval last week. I was told that the social media platform has reopened its verification process for select group of professionals and that I could make use of the opportunity to get my Twitter account verified. So, I applied.

I have never been in any doubt about my identity and genuineness. I got a name given by my parents, I have a profession, and I hold a regular job. And if you insist, I can also provide the other relevant documents, from PAN to Aadhar and also my Income Tax returns. With so much paperwork backing my credentials, I was fairly certain that the Twitter verification was given. But there was a twist.

I woke up this morning to find a message from Twitter that my request has been turned down. According to them, I do not qualify under their criteria and hence, my request has been rejected. But if I so desire, I can re-apply 30 days later and request for my request to be reconsidered by Twitter.

Just out of bed and yet to down my first cup of tea, I must admit my vanity was hurt. I realised that coming to terms with being rejected – no matter how old you are or how silly the purpose is – can still rankle. To voice that I was upset with Twitter, I in an ironical twist, took to Twitter to voice my displeasure. My post announcing my rejection got instant traction.

But having downed several cups of tea and regained my composure since, I have concluded that I perhaps shouldn’t have sought a certificate from Twitter at the first place, and definitely not complained on being rejected later on.

True, I am open to being ridiculed now for suffering from sour grapes syndrome. But I am certainly reconsidering whether a Twitter blue tick is really worth the trouble?

Most of my colleagues in the profession – both high and low in the hierarchy – have blue ticks and I truly got a tad swayed. And since I was in the habit of tweeting, I didn’t see any reason why I shouldn’t at least try and get my account verified. If not anything else, the readers of the magazine I edit are entitled to be assured that the person tweeting under my name is actually me.

But now that Twitter has denied my request, has anything changed for me? I certainly remain the journalist that I always was, in the same job with the same salary. Nothing really has changed, except perhaps the little dent in my vanity – that someone can say No.

A friend reminds me that Twitter is a private company, and just as a restaurant reserves the right to admission, it too can exercise the privilege of who to verify or not verify. I see the point, but don’t agree wholly. Restaurants do have the right to deny entry, but then they can be sued for discrimination. Likewise, Twitter occupies a public space and owes us some transparency.

Since I am on Twitter, I did try to get my account verified. That was perhaps a folly. Yet, I am thankful to Twitter for indirectly telling me that I had perhaps become a bit too vain.

Postscript:  After having denied me my verification in the morning , Twitter has now awarded me the 'Blue Tick' after I wrote the article.