US Elections: The End Is Not In Sight

Donald Trump is not the type to embrace a quiet retirement. And the longer he fights a pro-Biden result, the greater the danger. 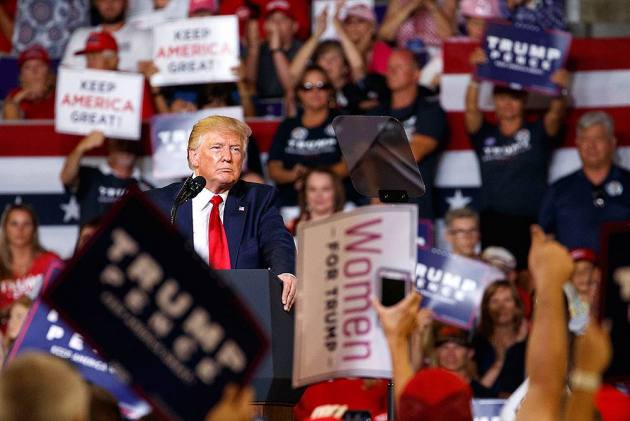 It would be nice to think that with the US presidential elections only a few days away, and Trump trailing badly in the opinion polls, that the end of nearly four years of right-wing populism a la Donald Trump is in sight.

This is a false hope on so many levels.

For a start, he may still win. And, a massive question mark hangs over the issue of whether or not Donald Trump will accept defeat at the polls. “If I lose, the election is fraudulent,” Trump asserts with unbelievable arrogance and disregard for basic democratic values.

If the president loses and refuses to concede than America runs the risk that Trumptonian arrogance obstinacy combines with divisions in American society to bring gun owners out on the streets. And the longer Trump fights a pro-Biden result the greater danger.

The convention since World War Two has been for ex-American presidents to slip quietly out of the political limelight to expand on their footnote in history by writing their memoirs, building a presidential library, creating a charity or two, joining the lecture circuit and taking on a behind-the-scenes elder statesman role. To do otherwise threatens the establishment of an alternative court which would undermine the sitting president.

Trump is not the type to embrace a quiet retirement. He will attack, lambast, slam and condemn with lies and conspiracy theories any occupant of the Oval Office other than himself because he cannot conceive of any other person being able to fill the position.

Trump has, however, managed to fill other positions—mainly in the judiciary. One-third of the Supreme Court Justices—Neil Gorsuch, Brett Kavanagh and Amy Coney Barrett—are Trump appointees and give the highest court in the land a 5-3 conservative bent. On top of that Trump has filled 216 – over a quarter—of the 870 federal judgeships with conservative jurists. Many of his core conservative beliefs on issues such as abortion, gun ownership and immigration will be ruled on by conservative-minded courts for decades to come.

On the foreign policy front, Trump’s bully-boy tactics have reduced America from beacon of hope to just another grasping superpower. There have been successes. He has persuaded NATO allies to increase defence spending, secured recognition of Israel by Arab states and made clear to Beijing that the US-Chinese relationship is now decidedly adversarial. But the tactics he employed to achieve those ends has alienated allies and left a bad odour in almost every world capital. His only foreign supporters are those who benefit from the same dubious political methodology.

Lies—or what his adviser Kelly-Anne Conway dubbed “alternative facts”--have been at the core of the Trump presidency. He will say or do anything that advances the cause of Donald Trump. “Truth,” it is said, “is the first casualty of war,” and Donald Trump was at war with anyone who disagreed with him long before he entered the White House.

His handling of the Coronavirus pandemic is the latest and possibly best example of lies in the pursuit of power. Trump’s handling of the economy was his best chance of re-election. The pandemic threatened that. So Trump opted for wealth over health. Other national leaders have adopted similar positions, but Trump has gone to the extreme with false claims about Chinese conspiracies, assertions that coronavirus was no worse than flu, that flu kills more people than Covid-19, refusal to follow medical advice and wear a mask, and—as the number of new daily confirmed cases tops 86,000—assert that the pandemic is an invention of the anti-Trump media.

But Trump’s most damaging, and possibly the most long-lasting legacy is his divide and conquer politics. Past presidents have sought to curtail the damage of the toxic partisanship that has plagued American politics since the 1980s. Trump has never attempted to represent those who did not vote for him in 2016. He will support any person, belief or organisation that swears to the loyalty to Donald Trump without any regard to the US constitution and the rule of law and attack, insult and belittle anyone who doesn’t. This has allowed the racists, the white supremacists, the conspiracy theorists and the second amendmenters to crawl out of the woodwork and it will be difficult to push them back in.

The author is the CEO of LookAhead News. (Views expressed are personal.)