Pandemic, infighting, anti-incumbency…the Yogi regime may be facing all of that. But SP, BSP and Congress seem to be in no position to cash in on the potential advantage 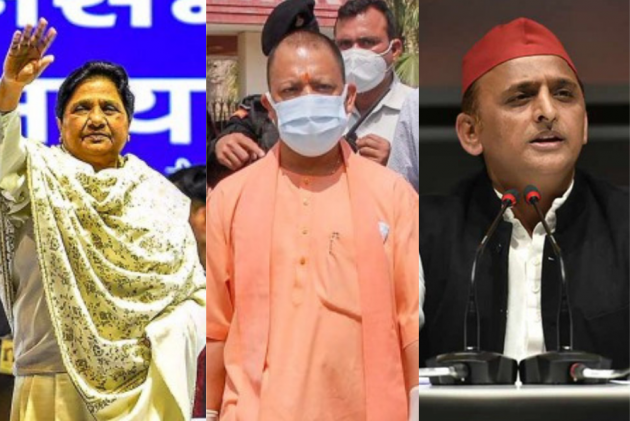 Just a few months to go before India’s politically most significant state goes into assembly elections. Currently, the BJP holds the fort with 315 seats (BJP: 306 seats; AD(S): 9 seats) out of a total of 403 assembly constituencies. Also, the party along with its ally, Apna Dal (Sonelal), holds 64 out of UP’s 80 Lok Sabha seats—most psephologists thought the coalition of SP and BSP might restrict the saffron party to some extent but that just didn’t happen. Now, what remains to be seen is if the BJP will manage to maintain its hold—at a time when the political situation might not be a replica of 2019 but the state might see the two big Opposition parties contest independently, fragmenting the anti-BJP vote.

Prima facie, it does appear that the election will be a one-sided affair, with the BJP maintaining its pole position and SP being a distant second. Reports of personality clashes and infighting within the BJP have surfaced recently but to what extent perceptions match reality is not clear—and even if true, what its consequences will be, only time can tell. One thing is more or less clear. Despite the reported dissatisfaction of a number of MLAs and MPs from the state, and despite Deputy CM Keshav Prasad Maurya’s hesitancy about accepting the sitting CM as the face for 2022, there seems to be no alternative to Yogi Adityanath for the BJP. His identification with the image of the party—what it offers and markets—is so complete.

The Samajwadi Party, the main Opposition force, has so far shown neither any zeal nor the intent to fight the incumbent Yogi Adityanath-led BJP Government. It seems somehow convinced that it will get the votes automatically in an anti-incumbency wave—regardless of negligible ground activity, especially from top leadership, on issues ranging from Covid mismanagement, non-availability of vaccination slots (especially for the 18-45 age group), repeated instances of police brutality, attempts to quell dissent, skyrocketing prices of fuel and cooking oil, to falling GDP and employment levels in the state. Akhilesh Yadav, former CM and SP national president, has confined himself to social media platforms to express his outrage. So either it’s complacency about a sureshot win OR they are satisfied beyond any doubt that no matter how much effort they put in, 2022 is a gone case.

Faith In Congress Rising, Its Vote-Share Has Gone Up: UP Congress Chief

Battle For UP: Can A Divided, Dithering Oppn Challenge Yogi Adityanath?

On the other hand, the Bahujan Samaj party has been performing very poorly. In the 2012 assembly elections, the party had been reduced to 80 seats from 206 in 2007—and never much recovered from that. It got zero Lok Sabha seats in 2014, and improved its tally to just 10 in 2019, when it contested in alliance with the SP. It scored 19 seats in the 2017 assembly elections—its tally currently stands at just seven MLAs after it expelled its stalwart MLAs Ram Achal Rajbhar (Akbarpur) and Lalji Verma (Katehri) from the party. Seen in totality, the party’s footprint more or less appears to be diminishing in the state. Can it hold on to its approximately 20 per cent voteshare? As of now, based on its current strength, there exist logical reasons to project that this seems highly unlikely—although there’s never any fool proof way of predicting the mood of the electorate. Its poor show in the Feb-March 2017 assembly poll came just five months after demonetisation, before and after which the BSP was seen to be a favourite in some quarters. Also, which side the elephant sits, before or after the elections, no psephologist can predict perfectly.

In the absence of an active Opposition and a near-vacuum in that space, the Congress and the new entrant in the state, Aam Aadmi Party, managed to get some coverage by raising issues of general concern. Though, many believe the BJP gave undue attention to both these parties on purpose, mainly with a view to further divide the already divided non-BJP votes, by seeming to project them as a viable option over the SP. Whatever be the reason, AAP MP Sanjay Singh has been constantly targeting the state government over almost every issue. But in the absence of a ground cadre, organisational presence and so little time in hand, the party will be purely relying on the individual candidate’s face and its manifesto, with Delhi-like promises. That won them two consecutive elections in Delhi but the road won’t be that easy in Uttar Pradesh.

Coming to the Congress, there’s a long list of people leaving the grand old party and joining the BJP, the latest addition to it in UP being Jitin Prasada. Though much unnecessary importance was given to his switch, his move isn’t going to cost the Congress much. Unlike Sachin Pilot or even Jyotiraditya Scindia, he doesn’t have a big support base. Prasada joining the BJP is neither a big advantage to the BJP nor a huge blow to Congress. Annu Tandon joining the SP was a much bigger blow to the party. The plight of the party is not just confined to those jumping the ship but also the state of old stalwarts whose presence is now hardly felt. The party still has leaders like Sriprakash Jaiswal, Zafar Ali Naqvi, Nirmal Khatri and Praveen Singh Aron but they can hardly be seen on the ground. The party has entrusted its MLA from Tamkuhi Raj, Ajay Kumar Lallu, with the important task of steering the UPCC as its president—and so far he has done a fairly decent job—but the party needs many more like him. Also, the introduction of Priyanka Gandhi Vadra in UP politics created a lot of hype, but she has mainly played cameos at regular intervals. In 2019, speculation was rife for a bit about her contesting against Prime Minister Narendra Modi from Varanasi before it fizzled out. Recently too, her name was being hyped as the Congress’s CM face but the party’s fear of failure seems to be outpowering its hunger for success.

Both Akhilesh and Lallu have ruled out the possibility of any alliance with any major party. Though it’s too early to predict anything, as of now the BJP looks comfortable to bag anywhere around 275 seats. None of the other parties look to be in a position to touch the triple digit mark. In fact, it won’t be surprising if the total tally of all other parties combined fails to touch 100 seats.

(Syed Kamran is a political commentator and columnist based in Lucknow. Views expressed are personal and do not reflect those of Outlook Magazine.)