What A Waste, Bengal

In a state that has no industry, it is quite obvious that Durga Puja is an industry that works brilliantly well engaging a whole host of people united towards one end. 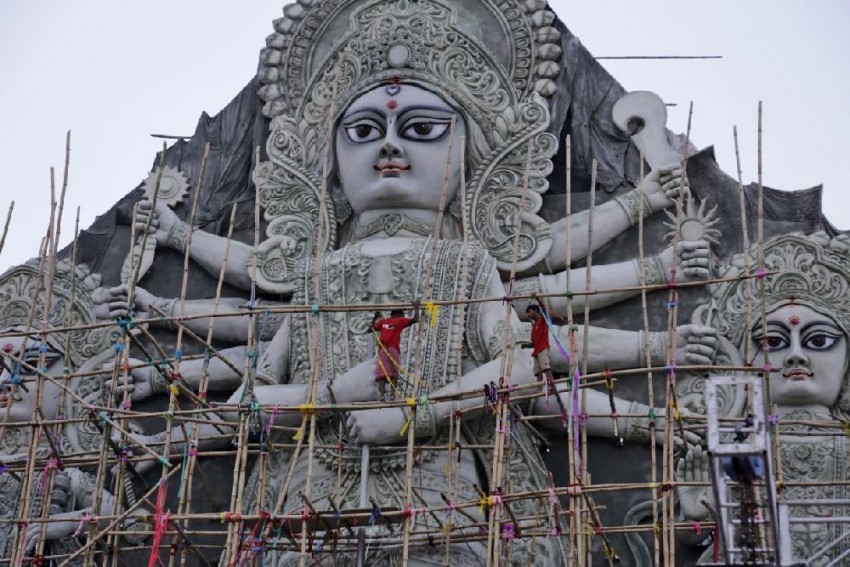 Workers on a bamboo scaffold give finishing touches to a huge idol of Hindu goddess Durga at a worship venue in Kolkata.
AP File Photo
Anjana Basu 2019-09-17T19:46:43+05:30 What A Waste, Bengal 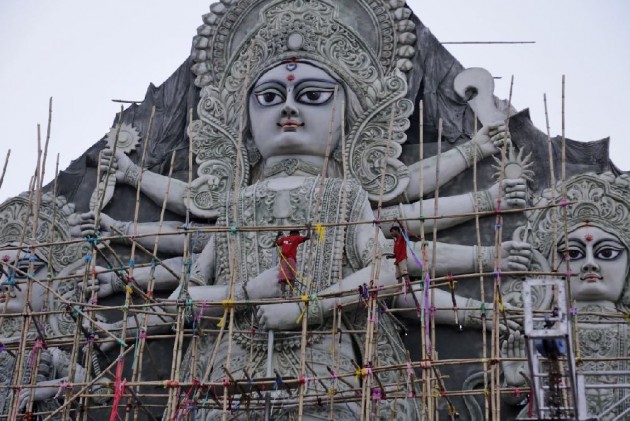 It is the run-up to Durga Puja and the roads are a mass of bamboo. Hammers can be heard in the narrow lanes as the pandal cages spring up, some faster than others. Evening brings snarls of traffic as commuters and sightseers jostle for space. At the end of it is a city filled with art installations – the craftsmanship of weeks of work suddenly on display for a few fleeting days before being dismantled with no record barring photographs and the name of the craftsmen, except in a few cases, anonymous. What a waste some people might say, while others sniff that whatever it is, it is not a religion and is, therefore, a waste of time.

Durga Puja is probably the only time when West Bengal ceases to be a waste. When the work culture suddenly starts to function full speed ahead, creating its own bottlenecks of course – without those Bengal would not be Bengal. On a wet Mahalaya evening the world’s longest alpona covers Lake Road – never mind that the idea was first conceived in another Bengal across the border for Airtel. Drums roll and Tollywood star and starlets spring into action. An intricately carved black pandal with huge Ganeshas at the entrance stops Hindustan Road in its tracks.

For Bengal, Durga Puja is something else – the homecoming of a daughter with her family, an occasion for ribbing, joking and communal interconnecting of a sort with food thrown in – after all a homecoming has to have food if you’re doing it the Bengali way. Everyone gets together to ensure that the welcome is worth it. The question, of course, is why does no one think the rest of the year is worth it? The art and inspiration are squandered without hesitation and then forgotten till the next Durga Puja comes around. Of course, add to that the fact that this year there is an extra political undercurrent to the proceedings. Hindutva India appears to find the proceedings distinctly unHindu – not to mention a friend or two in Delhi who feel that the scent of incense has been overtaken by commercialism.

Commerce was always part of the great autumn festival, even when it was run out of the Communist red fortress. Pandals had stalls with tracts on Marx cheek-by-jowl with advertisements for fairness creams and everyone made money. The organisers pocketed the extra from the advertisers; the workmen were paid in cold cash and went home happy, while the CM added to the Party kitty by inaugurating pandals – though that, of course, is Didi’s innovation on the original theme.

In a state that has no industry, it is quite obvious that Durga Puja is an industry that works brilliantly well engaging a whole host of people united towards one end. In a sense, it is a community project bringing together all those people who traditionally formed the artisans of early industry, malakars, lohars, shakras, patuas, chitrakars. At one point on a trip to Bali, I had noticed the different villages of mask makers, woodcarvers and silversmiths clustered together, and I remember thinking that perhaps there was an answer for a State that tom-tommed its culture but refused to take any steps towards retrieving the industries that gradually disappeared when capitalism flew the coop. I even suggested the theory to some art gallery owners I knew.  I am afraid they found the thought rather naive. Watching a goddess come to life in a pageant of splendour, the thought returns. Instead of a year of lethargy and six weeks of energy, why not create these communities who work as specialists around the year creating specialised pieces of art in line with their traditions? Add to them the light designers of Chandannagar who twist fairy lights into political statements and who have floated down the Thames in a barge to rival Cleopatra’s burnished throne.

There is a possibility, somewhere, of retrieving a vanishing way of life without the issues of pollutants in the air and water that industry throws up. Possibly even a village of marquee makers creating pandals for conferences and weddings that are one of a kind that vanish once the business is over without bricks and mortar traces. A waste again like the gorgeous pandals? Who knows, if lives can run on it, perhaps it may not all be wasted after all.

(Anjana Basu is an author and poet. Views expressed are personal.)