Why Stock Markets Are Booming When Economic Chips Are Down 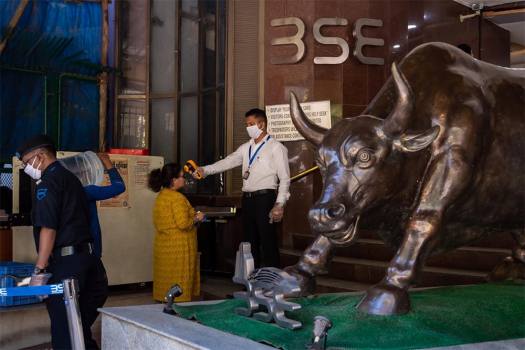 Security personnel use thermal screening devices on visitors to mitigate the coronavirus pandemic, at BSE Building in Mumbai.
Photo by Apoorva Salkade/Outlook
Ashish Maheshwari August 12, 2020 00:00 IST Why Stock Markets Are Booming When Economic Chips Are Down

The disconnect between rallying stock prices and gloomy economic data is probably the most noticeable in India, and it has left a lot of people searching for answers. While the Indian stock market has been rising despite Covid pandemic, the economic data paints a grim picture for India. It is also becoming apparent that people at the top of the economic pyramid are making millions, while many others are losing jobs due to the crashing economic fundamentals.

Markets in India are reflecting worldwide trends. Reports say that almost 46 million Americans filed for unemployment during March-June 2020. The US GDP tanked to a negative 4.8% in the first quarter, the first negative reading since Q1 of 2014.However, the equity market showed a different story. Between March 18-June 17, the US NASDAQ Composite rose by 40%.India witnessed a similar situation.

Indian NSE crashed and touched 7500 levels on 23 March on the indication of Covid lockdown in the country. It has historically been observed that companies perform well during March, the last quarter of the Indian financial year. Hence, the markets knew that there were no fundamental issues in the current stock market indices/pricing and touched its peak during early part of the year. However, it crashed much before the pandemic reached its peak.

Countries across the world announced lockdowns. In India, the first lockdown was imposed on March 25. The lockdown had a severe impact on the first quarter of the Financial Year 2020-21, and it was projected that India will perform poorly in April-June and July-September quarter due to drop in manufacturing and service activities. However, what followed was completely ironical as Indian stock markets witnessed a rise. So was the case with Dow Jones, it moved towards V-shaped recovery at the back contracted GDP estimates, falling economic data and other KPI's.

The above only confirms that markets do not react on immediate news unless it is a surprise event. What this means is that the crashed indices during March already factored in the bad news. The V-shaped recovery that followed was not due to the expected economic fallout but due to the fiscal stimulus packages, lockdown measures etc. announced during this time.

During the 2008 financial crisis, Indian unemployment rate was 5.3% whereas US unemployment rate was 9.3%. Indian GDP had a positive growth rate of 3.09% whereas US had a negative growth rate of -2.5%. During this time, BSE Sensex reached the 21,000-mark on 9 January 2008 and it reached 8200 level on 9 March 2009. This means that the market took 425 days to achieve its bottom during this period. During these 425 days, the market did have few short-term bull runs.

Let us refer to the Great Depression in 1929 and evaluate the US indices in this example. US Dow Jones stood at 381 on 3 September 1929 and touched 41 on 8 July 1932.  Hence, it took the markets almost 2 year and 10 months to touch its bottom. Again, during this period, the indices saw short-term bull runs.

Hence, if the past holds true, these indices cannot rebound within four months. So does that mean that the recovery only a bull trap? Well, historical indicators can offer guidance but cannot be completely relied upon as the present situation is slightly different. It is important to understand that: 1) With every recession and corresponding economic recovery, markets gain more resilience, and 2) the current economic downturn is primarily due to the pandemic. Any positive news such as a vaccine or drug, or a decrease in Covid cases can create optimism and recovery trend. This is different from the earlier crisis where several other variables affected the economy.

We also need to be mindful that a major part of this recovery rally has been caused due to the influx of liquidity in the economy. This liquidity is not backed by earning potentials and may cause a reversal pattern if the earnings don't follow and match the liquidity infused.

Lowering of interest rates by both the Fed and the RBI has also helped maintain this momentum.

Historical trend suggests that we are still in a bear phase since we have never experienced such a fast recovery during the past economic downturns. However, the current economic recovery factors, government intervention and medical advancements suggest that the current downturn will not last like the earlier ones.

It is equally important to have a sector specific and a stock specific view rather than assuming that the economic recessionary trend has completely reversed. For e.g- hospitality or entertainment industry will take time to revive. Similarly, banking and financial sector may have higher NPAs that may impact its future results. Hence, it is imperative to adopt a combination of fundamental and technical parameters and not just a number driven technical view.

(The author is a Chartered Accountant. Views expressed are personal.)