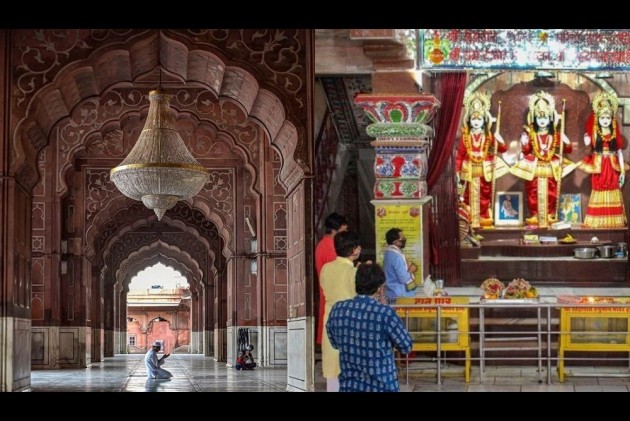 This week, four men were detained by the police in Mathura for reciting the Hanuman Chalisa at a mosque. They claimed it was a “fitting” response to namaz offered at the local Nand Baba temple by Khudai Khidmatgar peace activists earlier. Faisal Khan, the national convenor of Khudai Khidmatgar—a non-violent resistance movement founded by freedom fighter Khan Abdul Gaffar Khan—was sent to 14 days’ judicial custody for “promoting enmity between religions” and “defiling a place of worship.”

In Baghpat subsequently, a BJP leader recited the Hanuman Chalisa and Gayatri Mantra at a mosque “to promote amity and brotherhood” after seeking the local cleric’s permission.

While the temple priests in Mathura were enraged at the “sacrilegious act”, the Baghpat mosque’s cleric said, “God has built everything and can be worshipped anywhere.”

Ironically, inter-faith worship and scriptural readings have often transcended the boundaries of religion and caste in India. Secularism here is based on a strong tradition of mutual toleration and accommodation. If mosques are enabling centres for offering namaz and temples spaces for ceremonial worship, why can’t Muslims pray at temples and Hindus at mosques? Why can’t Christians pray at synagogues and Jews at churches?

Four years back, when the water level at Baje dam in Karnataka receded to alarming levels, the municipal councilors offered prayers to propitiate the rain gods at a mosque, temple and church. They felt collective prayers could avert a serious drinking water crisis.

For decades, devotees on their way to the Sabarimala Temple in Kerala have prayed at the shrine dedicated to Babar—a Muslim saint who became an ardent devotee of Lord Ayyappa. Legend has it that Vavar visits the temple even today along with the faithful,and plays a vital role in fostering communal harmony at the pilgrimage site.

What then prompted the police to crackdown on a peace activist who was only reading the namaz on the temple precincts and had done nothing to defile the Hindu faith? The priest even claimed Khan had knowledge of Sanatan Dharma and Ramayana.

If this was sacrilege, why have the faithful for centuries drawn succour from alternative religious practices, visited saints, gone on pilgrimages and read other religious texts to feel more centered? Why have communities put aside their differences to build houses of worship with common rituals?

In Maadhi village of Bihar which was once inhabited by Shia Muslims, Hindus manage a 250-year-old mosque and read namaz five times a day. The villagers make tazia during Muharram and celebrate festivals together in keeping with the traditional syncretic culture.

Across India, there are instances of ritual borrowings, solidarity-building and inter-faith efforts at sacred sites that have not only held communities together but also transformed the memory of historical transgressionsinto purposeful living.

At the Fatehgarh Sahib town of Punjab, for instance, a Sikh priest has been looking after a 350-year-old mosque alongside a gurdwara for years. What’s remarkable is that the mosque stands barely a kilometre from the spot where the two sons of Guru Gobind Singh were burnt alive in 1705 by Mughal commander Wazir Khan for refusing to convert to Islam.

The tragic history has not stopped the Sikh cleric from maintaining the ancient monumentor making arrangements for the local jormela where Sikhs congregate every year.

Even amid the COVID-19 pandemic, which morphed into an anti-Muslim virus since the TablighiJamaat congregation in Delhi, solidarity initiatives by faith communities in citiesand villages have kept alive the secular fabric of India. Calls for interfaith solidarity have come despite political leaders forbidding religious festivals, rituals and large gatherings.

In Varanasi, Catholic priest and social activist Father Anand, who was arrested last year for taking part in protests against the Citizenship Amendment Act, has been reaching out to believers across the religious divide through Zoom and other online platforms. His interfaith sermonssync Christian spiritualty with the ancient spiritual traditions of Varanasi.

Amid the growing anti-CAA protests, BhainsasurBadi Masjid in Biharsharif was opened earlier this year for non-Muslims to promote communal harmony and sensitise people about Islamic rituals. Religious leaders have not only been pooling together resources for the common good, but also keeping their premises open to all believers.

These efforts reinforce the idea of an accommodating India despite the growing attacks and discriminations against minorities.

In Mathura, the crackdowns can’t be delinked from the surge in religious polarisation. A few weeks ago, a local court in Mathura admitted a plea seeking to remove a mosque adjacent to the Krishna Janmabhoomi. More suchpleas could be in the offing.

September saw an apex body of 14 akhadas headed by Hindu seers pass a resolution in Prayagraj to “liberate Kashi and Mathura” by removing the two mosques. The seers sought the support of the RSS and Vishva Hindu Parishad, which played a critical role in the Ram Janmabhoomi movement of the 1980s.

The two recent incidents in Mathura to muddy India’s syncretic tradition and sharing of sacred space could be the first sparks in the Krishna Janmabhoomi conflagration.

(PriyadarshiniSen is an independent journalist based in Delhi. She writes for India and US-based media)