Why Dia Mirza's Pregnancy Is Not A Matter Of Trolling

The real question is why our orthodox and narrow-minded society cannot keep up with people who do not follow the traditional, outdated way of living. 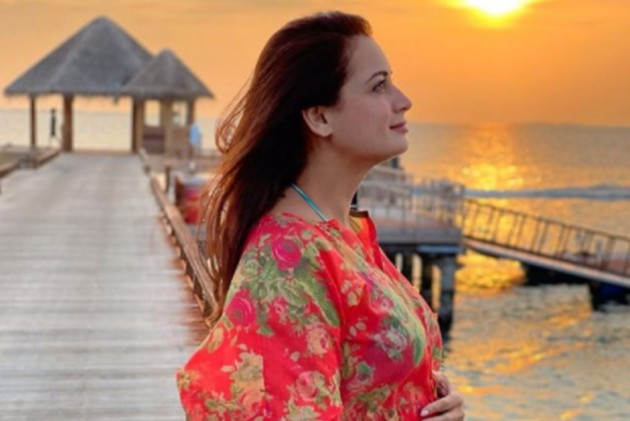 Actor Dia Mirza recently revealed that she is expecting her first child with her husband Vaibhav Rekhi.

In an Instagram post, the actor shared a picture of herself cradling a baby bump with a breathtaking sunset in the backdrop. Diya immediately became subject to trolls and mean comments who questioned the actor's pregnancy within 44 days of marriage. The 38-year-old married private equity professional Vaibhav Rekhi in February. In a private affair attended by close family and friends at her Bandra residence, the marriage was solemnised by a female priest. In another bold choice, the actor refused to have a 'Kanyadaan' and 'Bidaai' ceremony at her wedding.

As soon as the former Miss Asia Pacific announced her pregnancy on social media, the troll army socially shamed her for how she could be so heavily pregnant within such a short period of her marriage. The real question arising out of the incident is why our orthodox and narrow-minded society cannot keep up with people who do not follow the traditional, read outdated way of living. Individuals, especially women in India have been shamed for choosing paths not taken by many.

Trolls Question Dia Mirza's Pregnancy, She Responds, 'There Must Never Be Any Shame Attached To This Beautiful Journey'

Diya’s baby bump makes it apparent that she was sexually active with her partner before marriage, something that is completely normal between two consenting adults. But women in India are slut-shamed and often socially boycotted on the grounds of “morality” when found engaging in pre-marital sex. While the repercussions are incomparably different for men indulging in the same, women bear the greater burden of bringing shame to a society that keeps its prestige and sanctity in a woman's vagina. Virginity as a social construct has deeper levels for a woman than for a man.

Well-read gynaecologists would rather ask "Are you married?" to imply if you are having sex. This comes from the orthodox presumption that females are not supposed to be having sex before getting married. A woman who is sexually active before entering wedlock is considered “girlfriend material” and with no values. She's not deemed fit for the Indian marriage institution. Marriage as an institution has little to do with pregnancy. It is a bond we humans form to express our love and long-term commitment towards our partner. Whereas pregnancy is a very natural phenomenon to enable the continuation of species.

While pregnancy within a marital bond is the only accepted form in our land, bearing someone's child outside marriage is a common phenomenon in western countries. Several popular celebrities in the West have borne children outside of marriage. Angelina Jolie, Gigi Hadid and Natalie Portman are just a few celebrities to name who gave birth to their children outside wedlock.

Veteran Bollywood actor Neena Gupta also got pregnant with daughter Masaba when she was dating revered West Indies cricketer Sir Vivian Richards. At a time when the feminist movement did not have strong roots in India, the actor decided to continue with her pregnancy while facing a barrage of questions. Women in India are scrutinized for every step they take. Everything right from a girl’s career choice, friend circles, relationships, working hours, visitors, clothing are kept a keen eye on by everyone around. While some men give enough attention to the length of a girl’s skirt, middle-aged and older women are no exception either.

A Netflix show 'Indian Matchmaking' represents the upper class arranged marriage system in India. What garnered the limelight was the show host, Sima Taparia, who plays a real-life matchmaker and passes constant sexist and misogynist remarks as the show unfolds. Telling women to compromise to have a healthy relationship and bashing them for their personality, the show achieved great viewership for its representation of upholding toxic patriarchy by the women community itself.

Dia Mirza at the age of 38, is one of the women who chose to embrace motherhood later in her life, something they are advised against. But now when the world comes across more career-oriented women, the shift from the traditional notion (of getting pregnant in one's 20s) can be seen. Controlling women's sexuality is one of the many ways patriarchal power structures of caste, gender, class exert their rule over women. A woman attaining sexual liberty and taking her bodily decisions on her own does great harm to these rigid structures that have been passed on for generations.

It's high time that our society stops judging a woman for the choices she makes in her personal life. While pre-marital sex is a mark of a man's desirability, the least we can do for a woman embracing her sexual life is not slut-shame her.