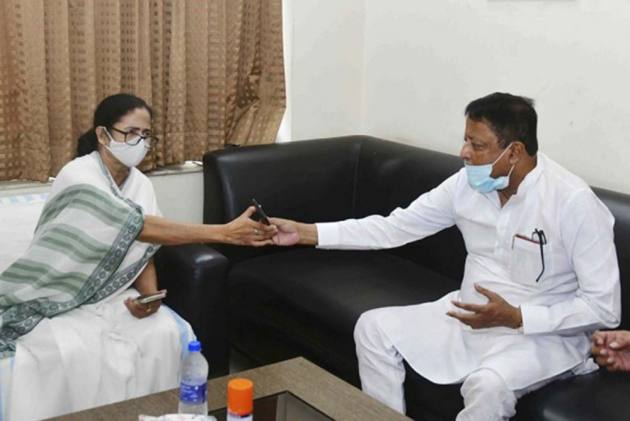 On Tuesday, eight BJP MLAs including the Leader of Opposition Suvendu Adhikari, met Governor Jagdeep Dhankhar and tendered their resignation as chairmen of various Assembly committees in protest of the Speaker’s decision to allot the chairmanship of the public accounts committee (PAC), considered the most important one of all such legislative committees, to Mukul Roy, a BJP MLA on paper, who joined the TMC a month after the election results were announced.

Following this, Speaker Biman Banerjee told the media that Adhikari and others were free to knock on anyone’s door, be it the Governor or the President, but nothing would matter because he did nothing illegal.

The Speaker is right. There is nothing illegal in his actions. He is fully within his rights to nominate whichever of the MLAs he prefers to the position of chairman of any legislative committee, including the PAC.

But his actions can certainly be called undemocratic, if not immoral.

There is no written rule that the PAC chairman post has to be given to someone from the Opposition party. But this is an unwritten convention that Speakers, and ruling parties, follow across the country. The PAC usually has more members from the ruling party but an Opposition legislator is chosen to head it. The convention was started by the Uttar Pradesh government in 1948 and followed by the Centre since 1967.

The PAC examines the reports of the Comptroller and Auditor-General of India (CAG) related to the Centre and different states to verify if the funds spent were actually available or not and if it had been spent for the same purpose earmarked by the House.

Take the case of Parliament. The post of the PAC chairman is currently held by the Congress’ Lok Sabha leader, Adhir Ranjan Chowdhury. The BJP-ruled Uttar Pradesh in 2018 elected Samajwadi Party MLA Mehboob Ali as the chairman of the public accounts committee. In another BJP-ruled state, Gujarat, Congress MLA Punjabhai Vansh is the present PAC chairman.

In Maharashtra, after the Shiv Sena-led government took charge, the BJP’s Sudhir Mungantiwar was elected as the chairman of the PAC. Before that, when the BJP-led government was in power, the Congress’ Gopaldas Agarwal was the PAC chairman. In Congress-ruled Rajasthan, leader of the Opposition, the BJP’s Gulab Chand Kataria has been serving as the chairman of the PAC since 2019. In Tamil Nadu, when the All India Anna Dravida Munnetra Kazhagam (AIADMK) led the government, Opposition party’s Dravida Munnetra Kazhagam (DMK)’s senior leader S. Durai Murugan served as the PAC chairman.

But West Bengal chief minister and Trinamool Congress (TMC) supremo Mamata Banerjee clearly wanted to break this convention after returning to power for a third consecutive term and with her biggest-ever mandate.

On June 23, Mukul Roy submitted his nomination for a berth in the PAC, supported by a Gorkha Janmukti Morcha MLA, and on June 24 the chief told the media that her party would support Mukul Roy in the position of its chairman. Since the ruling party has more members in the PAC, they can get elected whomever they want. But what was perhaps the most shocking of her statement is that she described Roy as a BJP MLA.

“Mukul belongs to the BJP,” she said in her attempt to show that the TMC was adhering to the principal of nominating someone from the Opposition party to this post.

It was shocking because her remark came less than a fortnight after Roy joined the TMC in the presence of Banerjee at the TMC’s state unit headquarter. Roy, once a Mamata Banerjee-confidante, joined the BJP in November 2017 and won the 2021 assembly election on a BJP ticket from Krishnanagar Uttar. He joined the TMC on June 11 but did not tender his resignation following his defection. The TMC has cited that two TMC Lok Sabha MPs, including leader of the opposition Suvendu Adhikari’s father, Sisir, who had joined the BJP ahead of this year’s assembly elections have not resigned from the Lok Sabha either.

While the TMC’s argument on resignation following defection may still be considered valid, there is no way one should support Mamata Banerjee’s way of describing an MLA who has defected to be belonging to his former party, as it is a blatant show of disrespect for democratic conventions being followed by all other political parties across India. The PAC is supposed to hold the government accountable for irregularities and malpractices in the use of funds and a ruling party legislator holding that chair is likely to compromise the very purpose of the committee.

This, however, is not the first time the Mamata Banerjee government irked the opposition party over the PAC chairman post. In 2017, the Speaker nominated the Congress’ Manas Bhuniya to this post, while the Congress, which was in an understanding with the CPI(M), wanted this post to go to the CPI(M). Ignoring the opinion of the Congress, the largest opposition party during that term of the Assembly, Speaker Banerjee appointed Bhuniya, who soon after joined the TMC.

Politics is a war where, perhaps, every trickery is fair. But when it compromises the democratic setup meant to ensure checks and balances, it is no longer a matter of rivalry between political parties. It’s taking away from the people their right to be aware of irregularities and malpractices. And describing Mukul Roy as a BJP MLA is as much true as is saying that the Rashtriya Swayamsevak Sangh has nothing to do with the BJP – truth only on papers.