Will Union Cabinet Expansion With New Women Ministers Be Harbinger Of Good Change?

Even though currently, total number of women in Parliament is at an all-time high, less than 15 per cent women are part of political decision making at the national level. 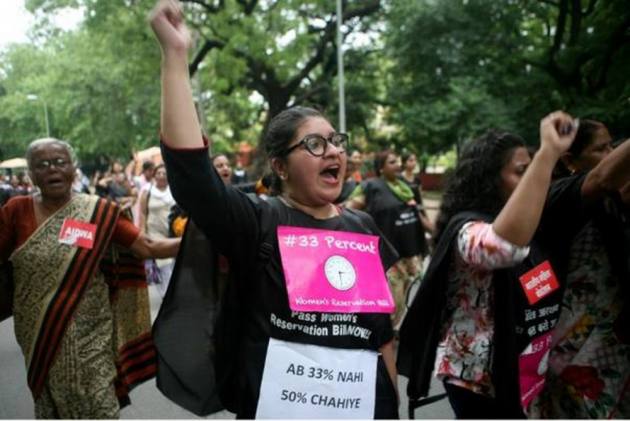 With seven new women ministers getting inducted in the Union government, the Council of Ministers is finally proportionate to the strength of women MPs in Parliament. The total number of women in Parliament itself is at an all-time high of 106. This is the good news. However, when it comes to women representation in political leadership, the skew remains abysmal.

The representation of women in Parliament is nothing to write home about. One half of the country has less than 15 per cent presence in the political decision making at the national level. In the upper house, Rajya Sabha, the number of women MPs is 27 (out of 245) which is just 11 per cent and in the lower house, Lok Sabha, there are 79 women (out of 542) - only 14.5 per cent.

The country has had only 617 women MPs since 1962 and about half (48.4 per cent) of the constituencies in India have never voted a woman MP. Data by Inter Parliamentary Union (IPU) shows that India ranks 147, when it comes to the percentage of women present in parliament.

As many women voters as men!

This data however is not representative of the share of women voting in parliamentary elections. Women voters have grown exponentially and there has been a drastic increase in women participation in the elections since the 1990s. Research has discovered a significant and persistent reduction in gender inequality in voter turnout in all state elections in India, over the past 50 years. Kapoor and Ravi (2014) in their study ‘Women Voters in Indian Democracy: A Silent Revolution’ found that “systematically the gender bias in voting is being reduced, over time and across all states of India. Voluntarily, more and more women electors are actually casting their votes.”

The gender gap in voter turnout has decreased so significantly that in the general elections in 2004, men held an 8.4 percentage-point turnout advantage over women but that difference reduced to just 1.8 in 10 years. Significantly, in the 17th parliamentary elections, women voters outnumbered men in 13 states. For the first time in 2019, women closed the gap to male voters. Their respective turnout was identical, with just a 0.07% difference in favour of men.

While universal suffrage came to India along with its independence, political parties did not count women voters separately in their electoral strategies. In a strongly patriarchal society, it was expected that women’s decisions would be driven by their male kin.

However, political pundits today say that women have their own mind and “Indian women are a distinct and independent ‘vote bank’, on which political parties have already begun to focus in order to win elections.” As women are coming out in large numbers, party policies and campaigns have increasingly focussed on winning over women voters. From free cooking gas to bicycles for girls—many electoral promises have been made to lure women voters.
Despite such a huge and well demarcated vote bank, all major political parties did not put forth an equal number of women candidates in the field for the 2019 election campaign. The BJP with 12 per cent and Congress with 13.7 per cent fell short of even allocating a third of tickets to women candidates.

There are only four countries in the world which have 50 per cent or more women in parliament in single or lower houses and Rwanda (61 per cent) tops the chart. There are 19 countries which have reached or surpassed 40 per cent, including nine countries in Europe, five in Latin America and the Caribbean, four in Africa, and one in the Pacific. According to UN Women, two-thirds of these countries have gender quotas that allow women’s political participation in national parliaments. This is unsurprising, as research says that women in public office make a difference.

Chattopadhyay and Duflo (2004) found that “Mandated representation of women has important effects on policy decisions in local government. Women elected as leaders under the reservation policy invest more in the public goods more closely linked to women’s concerns: drinking water and roads in West Bengal and drinking water in Rajasthan.” Having women take part in the decision making is good for them!

The impact of having more women in Parliament also diversifies legislative agendas, especially regarding women and other vulnerable groups. Women’s presence also erodes negative perceptions about women as political leaders, both among the public and among politicians. O’Brien and Piscopo (2018) found that “women’s presence meets resistance, particularly because parliaments’ internal cultures and leadership remain male-dominated and Gender quotas mediate all these trends.”

India has long toyed with the idea of bringing in reservation for women in Parliament. The Women Reservation Bill introduced in 2008 sought to reserve one-third of all seats for women in the Lok Sabha and the state legislative assemblies. The Rajya Sabha passed it in 2010 but it has never been voted in the Lok Sabha and there have been opponents of the bill in all major political parties. Despite research proving that such affirmative action will bring positive change, it is still to be brought to vote.

Parties can of course self-enforce voluntary quotas which few like the Biju Janata Dal (BJD) and Trinamool Congress (TMC) have done. Neighbouring countries like Pakistan and Afghanistan to Nepal and Bangladesh, have reserved parliamentary seats for women. Rwanda, which tops the chart at IPU has 33 per cent of reservation for female candidates. In Latin America, 14 countries have constitutional quotas for women. European countries like Portugal, Spain and France have constitutional provisions for reserving seats for women candidates. Germany, UK, Australia and several other countries in the west have voluntary party quotas for women.

India has had strong and powerful women leaders who have set examples of good governance with a track record of winning popular mandate. As the world’s largest democracy, with an empowered and emancipated female vote bank, women need to be represented equally at the highest political decision making. India can learn from other countries and global experience to bring in policy changes and create an enabling political culture for women to take part in the democratic process not just as voters, but as leaders.

(Views expressed are personal and do not reflect those of Outlook Magazine. The author is a faculty at Bhavan’s S.P. Jain Institute of Management and Research.)