Home  »  Website  »  International  » Opinion  »  With Green Climate Fund Getting Replenished, It Is Time To Invest In Innovation

With Green Climate Fund Getting Replenished, It Is Time To Invest In Innovation

The Green Climate Fund has a unique mandate of working directly with national agencies and sub-national agencies so long as these are endorsed by national governments. Despite this, the GCF has channeled its fund predominantly through large international firms and multilateral organisations. 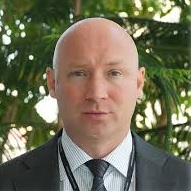 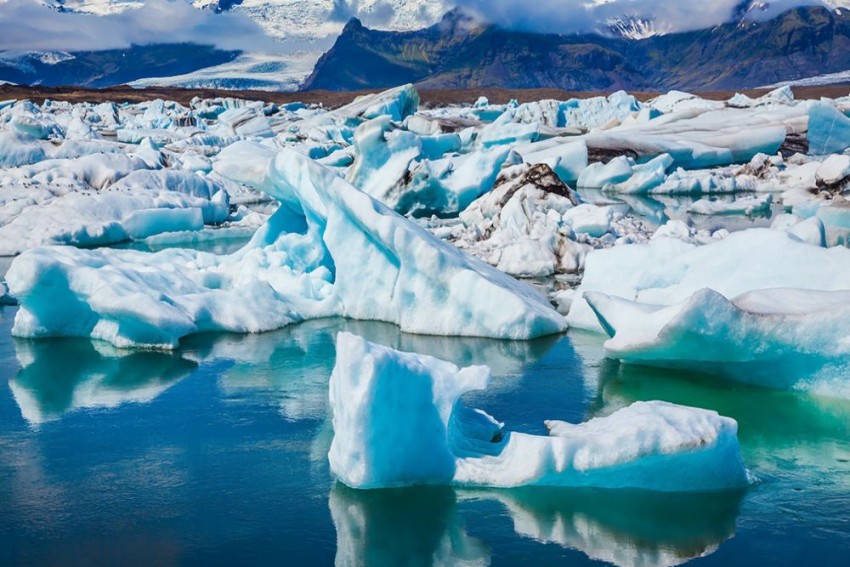 The Green Climate Fund (GCF) was set up as a consequence of the Paris climate negotiations to be an operating financial entity of the United Nations Framework of the Climate Change Convention. The Green Climate Fund has a unique mandate in that unlike other climate funds, it can work directly with national agencies and sub-national agencies so long as these are endorsed by national governments. Despite this, the GCF has channeled its fund predominantly through large international firms and multilateral organisations. This has meant fewer risks in entering the unpredictable market for climate investments where both bilateral and multilateral agencies compete to fund the most innovative projects. With its first replenishment, the GCF has the opportunity to use its experience and invest in innovative staff and projects. What can we learn from institutional economics on how this may be done?

During its first five years, the GCF committed over US$5.6 billion to climate investments in 120 countries. As of 2019, it had disbursed more than US$1 billion to developing countries. In a review of the performance of the Fund, the Independent Evaluation Unit (IEU) noted that a significant portion of the Fund’s investments is channeled through large multilateral development banks or UN agencies. As of March 2020, 86 per cent of the Fund’s overall resources were channeled through international agencies that have been ‘accredited’ to it (see the IEU’s new accreditation evaluation here). This is surprising since unlike most other climate agencies, the GCF is permitted to work directly with national actors.

Considering this mandate and also the importance of country ownership in its business model, why hasn’t the GCF worked to the maximum extent possible with national agencies? One body of work in institutional economics is especially helpful to understand why GCF’s investments so far have been rather conservative and should be more adventurous in the future.

In economics, transaction cost approaches highlight how actors in markets reduce search costs and the challenges of ‘asymmetric information’. Back in 1937, Ronald Coase argued that the reasons for the existence of ‘firms’ is mainly to reduce transaction costs in organising production: if a firm can produce an input more cheaply and reliably by itself, rather than purchasing the product in a market, then a firm would do so. Based on this insight, transaction cost analyses argue that actors in markets will either work with their own structures or depend on reliable and trustworthy actors, rather than incurring the costs to find someone new to work with. Working with established actors reduces the costs of managing projects, overcoming implementation challenges, dealing with potential complaints, and, possibly, the costs of mediation and legal fees.

This work also intersects with a large body of work on ‘asymmetric information’. The idea of asymmetric information was featured in a famous paper by George Akerlof about the ‘market for lemons’. Akerlof argued that if there is no way to confidently know the quality of a new product, many of us will only pay less than the true value of the product. This then becomes a self-fulfilling prophecy as sellers will only introduce lower-value products into markets.

These perspectives can help explain why, when starting as a new actor in the climate investment market, the GCF has committed and distributed funds to established actors. Established multilateral organisations that have existed for more than 30 years have been ‘safe bets’ in that there is relatively low information asymmetry associated with them. Unfortunately, the flip side of this is that the Fund hasn’t worked enough with new actors who could offer potentially transformative projects.

The work of the late Oliver Williamson shows that the level of transaction costs for any actor, but especially for new actors in a ‘market’, is influenced by three factors: uncertainty, asset specificity, and frequency of exchange. Applying these factors, we can see three reasons why the GCF’s choice of accredited entities has been particularly conservative.

First, the global climate ‘market’ is relatively recent. All actors have limited information on current and future market conditions. As the first commitment period of the Kyoto Protocol 2008-2012 and the creation and collapse of carbon markets shows, global agreements can create and alter market conditions dramatically. This tendency increases uncertainty for new entrants such as the GCF. In this situation, a safe bet is to channel funds to established multilateral organisations.

Second, the GCF is in competition with more established actors for the most innovative projects with the greatest impact. These actors include international climate players such as bilateral agencies of countries, the World Bank, and specialised climate agencies such as the Adaptation Fund. As a result, the GCF has hired staff who are experienced in working with a wide range of established actors and sectors, rather than finding staff who are specialised in working with national agencies or in niche and emergent areas.

Third, Williamson’s work shows that markets evolve: over time, information gets collected, and actors become better known, leading to the creation of trust and ‘reputation’. Trust gets codified into institutional codes such as guilds, standards systems and certification standards. This process takes time but, once established, it reduces uncertainty and allows firms to specialise in specific assets. In the case of the GCF, greater information about and interaction with national agencies and non-international organisations now enables the GCF to invest in more specialised people and innovative projects.

Figure 1 below, from the IEU’s accreditation evaluation, shows the ‘climate portfolio’ of seven international accredited entities that the GCF works with. Despite claiming to contribute to a paradigm shift, the share of ‘climate portfolios’ within overall portfolios has not changed markedly from 2011 to 2018. 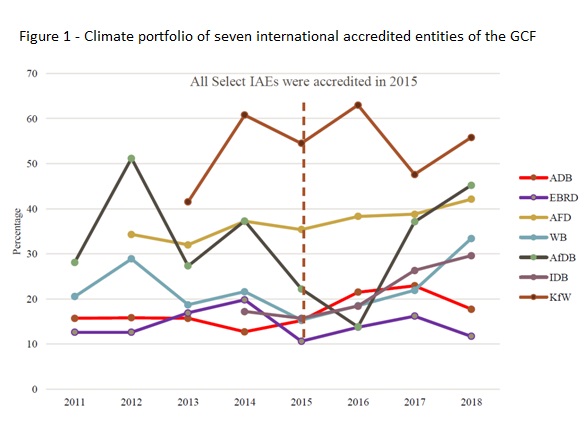 The GCF’s first replenishment, during which 50 countries pledged an additional US$9 billion, now provides the Fund with an opportunity to move away from business-as-usual with international firms and multilateral organisations.

While uncertainty in the global climate market will remain, the experience the GCF has gained thus far along with better information about new actors means it can and should invest in specialised staff and greater innovation. Indeed, the information and trust it has built for itself thus far can now lead to the transformative investments the GCF is mandated to achieve. The Fund must direct its attention to the Direct Access Entities and make it easier for these national agencies to work with the GCF.

[Dr Martin Prowse is Evaluation Specialist at the Independent Evaluation Unit of the Green Climate Fund, South Korea. Dr Prowse has taught at four universities across Europe and holds a Ph.D. from the University of Manchester. His latest book is ‘Tobacco, Transformation and Development Dilemmas from Central Africa’ published by Palgrave.

Dr Jyotsna Puri (or Jo) leads the Independent Evaluation Office of the Green Climate Fund. She is the lead author of the paper ‘Climate and Money: Dealing with ‘Impact Washing’ and a case for Climate Impact Bonds’ that will be published in the Global Handbook of Impact Investing in December 2020. Jo is also adjunct faculty at the School of International and Public Affairs at Columbia University.

Hope To Finish Coronavirus Pandemic In Less Than Two Years: WHO