PM Modi sees yoga as an opportunity to further his triumphant nationalism and project India as a global spiritual leader, a vishwa guru. 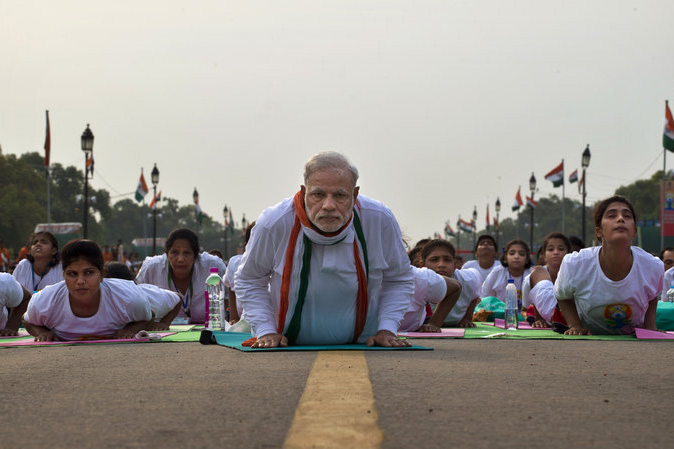 The central government recently launched an international video blogging competition ‘MyLifeMyYoga’ ahead of International Yoga Day on June 21. Prime Minister Narendra Modi announced the contest on his radio programme Mann Ki Baat, explaining the benefits of yoga and Ayurveda to people from Hollywood to Haridwar amid the coronavirus pandemic.

Over the last few years, the Modi government has brazenly seized yoga as a propaganda and public relations tool. Pictures of newfangled practitioners and self-styled gurus of this ancient Indian tradition splayed out on their yoga mats with Modi urging the nation to “embrace yoga and make it an integral part of daily routine” are all-too-fresh in one’s mind.

In the run-up to every celebration, Modi has tweeted gleaming photographs of himself in his asana-immersed avatar.  Five years ago, on the lawns outside the Indian Parliament in observance of the first UN World Yoga day, he even set the ball rolling for breaking the record on the largest yoga session in history.

This year is no different.

Even though the BJP government has faced global criticism for its handling of the coronavirus pandemic and the humanitarian and economic crises that have convulsed India, Modi has turned this “crisis into an opportunity”. A massive digital campaign has been rolled out by him to deliver holistic healing under the banner “yoga at home, yoga with family” to mark International Yoga Day.

The practice of yoga—one of the six Astika schools of Hindu philosophical traditions that originated in ancient India—is now a multibillion dollar industry. Modi’s enthusiasm for it goes beyond recognising it as a source of health and well-being. He sees yoga as an opportunity to further his triumphant nationalism and project India as a global spiritual leader, a “vishwa guru”. The Prime Minister has also spotted this as a unique brand that could boost his own image worldwide, and among the middle class in India who can forget misgovernance in national pride.

But under these exceptional circumstances, should the government not have focused on the therapeutic aspects of yoga to help swathes of our population under severe economic, social and psychological distress? Millions are without basic food and shelter, forget internet access. Instead of announcing cash prizes worth thousands of dollars, trophies and certificates for video blogs and testimonials, shouldn’t the government have factored in the vast digital divide in the country where internet access is really a privilege?

Only last year, the Prime Minister puffed his way through a 30-minute meditation session at the Prabhat Tara Grounds in Ranchi on International Yoga Day. He said he would take the “journey of modern yoga from the cities to the villages, to the poor and tribal homes…because it is the poor who get the most pain due to illness.”

Urging everyone to embrace the centuries-old discipline, Modi had said, “Yoga is beyond the distinctions of age, colour, caste, creed, rich-poor, province and frontier. Yoga belongs to everyone, and everyone belongs to yoga.”

A year on, these distinctions have anything but melted away. Amid mass exoduses of poor and migrant workers from urban centres to far-flung villages across the country, severe food shortages and riots following the harshest lockdown announced by the government in March, the BJP machinery has the roadmap ready for new-age yoga. The government benefactors are urging people to submit short videos of their yoga practices such as kriya, asana, pranayama, bandha or mudra, along with video messages outlining how these practices have impacted their lives. The concerns of the poor—whose plight Modi had made centre-stage last year—have conveniently been wished away.

While the government is currently preoccupied with the Ministry of Ayush and Indian Council for Cultural Relations—the key stakeholders of the digital yoga campaign— many yoga schools and gurus known for their immersive traditions, have been relegated to the margins. With their knowledge and training, these social media-wary practitioners would have brought more relief to a distressed nation looking for support and healing.

The traditional yoga schools have long insisted that yoga is a lifestyle and not merely a collection of asanas. Even though the practice of asanas is central to the tradition, they dwell on the correspondence between the physical and spiritual—incorporating metaphysics, ethical practices and self-development techniques for the mind, body and soul. Advaita Vedanta even details how the higher forms of yoga are an intensely spiritual path and preparatory exercises leading to contemplation of oneself as the most universal, namely consciousness.

Long before Baba Ramdev and his Patanjali brand made yoga mainstream, Yogacharya Bellur Krishnamachar Sundararaja Iyenger and other stalwarts had popularised the classical practice of yoga and yoga sutras. Before 3D animated videos of asanas gained traction on social media, the classical practitioners were critical of yoga’s cultural appropriation and commercialisation. Many feared yoga would get detached from its spiritual realm to make room for a set of exercises by fitness enthusiasts, while others were critical of linking International Yoga Day to Lord Shiva, for it could reverse yoga’s appeal to all faiths.

Bringing more traditional practitioners on board amid the coronavirus outbreak would have allayed some of these fears, and even arrested the growing satellite traditions of yoga. Inclusion of classical practices would have reinforced the idea that yoga is about individual growth, stability and being centred, and not photo-ops or social media competitions.

Instead, the narrative has yet again shifted to DIY videos, yoga Olympiads, yoga modules, and record setters. Are these the cures to upended lives and disrupted lifestyles?

(Priyadarshini Sen is an independent journalist based in Delhi. She writes for India and US-based publications. Views are personal.)

Loss Of Smell And Taste Added To Coronavirus Symptoms