Heard any controversy on Mughal-e-Azam, the mother of all period films? Mumbai films sell, and, with globalisation, have made their presence felt internationally. That, I suspect, is the root of the current debate on Mangal Pandey. Regarding the authenticity of the events depicted in this film, Rudrangshu Mukherjee, who has recently published a study of the Mangal Pandey episode, is of the opinion that the film is a blatant attempt to pass off as history the myth surrounding a local hero like Pandey. True to his Oxford training as a historian, Mukherjee has gone through the rigours of the archives to claim that according to testimonies at the trial of Mangal Pandey, the sepoy was heavily intoxicated when he committed the rather rash act of attacking the British officers at his cantonment--he had no larger vision of contesting the Company’s rule and was never supported by the other sepoys, though they may well have sympathised with him. Mukherjee sets up a cause and effect chain, making the case that there was a good month and a half lapse between the Pandey episode and the outbreak of the rising that has variously been identified as the Sepoy Mutiny or the First War of Independence.

Another writer in a leading Bengali daily has drawn upon other historical inaccuracies, such as Pandey’s participation in the Afghan War. At the other end of the spectrum, British historian Saul David has criticised the film on the ground that by 1857 slavery was legally abolished in the British Empire, and that he has come across no historical evidence of slavery in contemporary India, nor any case of atrocities centering on the cultivation of opium, as shown in the film. 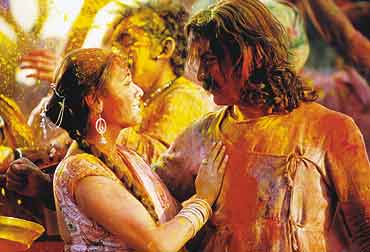 Leaving aside the claims of various branches of Pandeys in UP and Bihar, or of organisations, such as the Mangal Pandey Manch, which have alleged distortion of history because the film shows Pandey visiting a prostitute, the criticisms of historians like Mukherjee and David raise the very important question of what exactly we understand by history, and in what way a film like Mangal Pandey is responsible for upholding that sense of history. Two of the larger questions that come to mind having followed these developments of the last week or so are (a) What history and what falsification are we looking at? (b) What kind of responsibility should we at all expect from a film such as Mangal Pandey: the Rising?

Clearly, history as Mukherjee or David understands it is a positivist history, which establishes "facts" from studying established archives. The question that has, however, confronted historians for a long time now is whether official documents, such as the proceedings of Pandey’s trial, should by themselves be used to reconstruct the past.

As studies of peasant and tribal uprisings in nineteenth and twentieth century India have shown, the official view was perpetually engaged in a minimisation of such events as sporadic, emotional acts, whereas a reading against the grain of such sources produces an altogether different interpretation of such uprisings. In the case of Pandey, the official view would naturally be in favour of depicting this as a rash act, committed under the influence of bhang, more so if there had been any stirrings of discontent around the introduction of the greased cartridges.

However, not being an expert on 1857, my concern is not whether Pandey was a nationalist, or whether he was simply too intoxicated for his own good. My concern is with this understanding of history, which sees no grey areas between "fact" and falsification, or how myth has been integral to the very unfolding of what we understand as history. The Pandey legend is just one such case in point.

Coming to the film itself, my idea here is not to embark on its defence. For me, it is a popular film, enjoyable for good production values, star qualities and the like. My concern arises regarding attempts to impute some sort of fake historicity on this kind of a text, which would not be concerned with such issues in the very first place. The very logic of making a film like Mangal Pandey, at a time when the Mumbai film industry has reaped heavily on period films, and those based on the lives of nationalist figures like Bhagat Singh, would entail its fitting into a popular nationalist perspective.

In fact, the idea of Pandey as a nationalist hero is very much the established discourse in school text books, and even in our college days, I remember for every batch of history students studying 1857, one sure-shot question in the exam was "Was 1857 a Sepoy Mutiny or a National War of Independence?" The film Mangal Pandey, therefore, very much fits into an established official discourse of nationalism and cannot by itself be accused of disseminating a flawed history, if that discourse is already in place . At the most, it could be accused of being just another of those romanticized histories that has been the industry's forte, but then, that is what keeps the industry going.

Also, it would seem that those concerned with the film’s depiction of Mangal Pandey as the first nationalist are primarily concerned about the "ordinary" filmgoer, who is, by their definition, without a "proper" sense of history. As one Calcutta intellectual writes, these people will know history from the film, and take home a totally fabricated history. One cannot help but sigh at this very patronizing sentiment, which ignores the very complexities of the viewing process, and the multiple levels at which audiences make meaning in popular cinema. In fact, one wonders whether there is even an awareness of the discipline of cinema studies, when confronted by such arguments, which work with the assumption that a film can produce only one set of meanings. This is not to say that there should be no conversation on the politics of such films, or the history or histories of the period and characters they depict; only it should be prepared to engage with the tradition and complexities of the "Hindi film" and the viewing process, instead of simply passing the whole thing at a tangent

In fact, this whole debate over the historicity of the film seems to be a non-issue. For the historian, the more acceptable version may well be that of Mangal Pandey as the foolhardy Sepoy, who was too intoxicated to know where he was going. Indeed, I would agree that Pandey had no larger nationalist vision of contesting the company rule. However, it would be ridiculous for the economic logic of the Mumbai film industry to make such a film on Mangal Pandey and to show the climax as being nothing but Pandey high on bhang! Who would buy a film with such an anti-climax?

And, it does seem ironical that persons so dismissive of popular cinema have suddenly started engaging with it, and of all things, on the issue of historicity. Mughal-e-Azam, the mother of all period films is as loosely or closely based on history as Mangal Pandey, yet no one in all these years has thought of raising questions regarding its historicity; this trend of raining on Mumbai film parade seems to have become fashionable only in very recent years. What could be better than being able to capitalise on the market value of Mumbai films and yet retain the classic Indian intellectual’s distance from this bazaar culture?

Mumbai films sell, and, with globalisation, have made their presence felt internationally. That, I suspect, is the root of the current debate, such as it is, on Mangal Pandey. Would any of our historians have taken notice if Mangal Pandey had been made in Bengali, Oriya or Assamese?

Sharmistha Gooptu is working on her Ph.D on Indian cinema at the University of Chicago.