Would Mulayam withdraw support? 'I cannot deny that those possibilities exist,' the PM says. But would he accept the third term, if pressed? 'These are all hypothetical questions. We will cross that bridge, when we reach there' 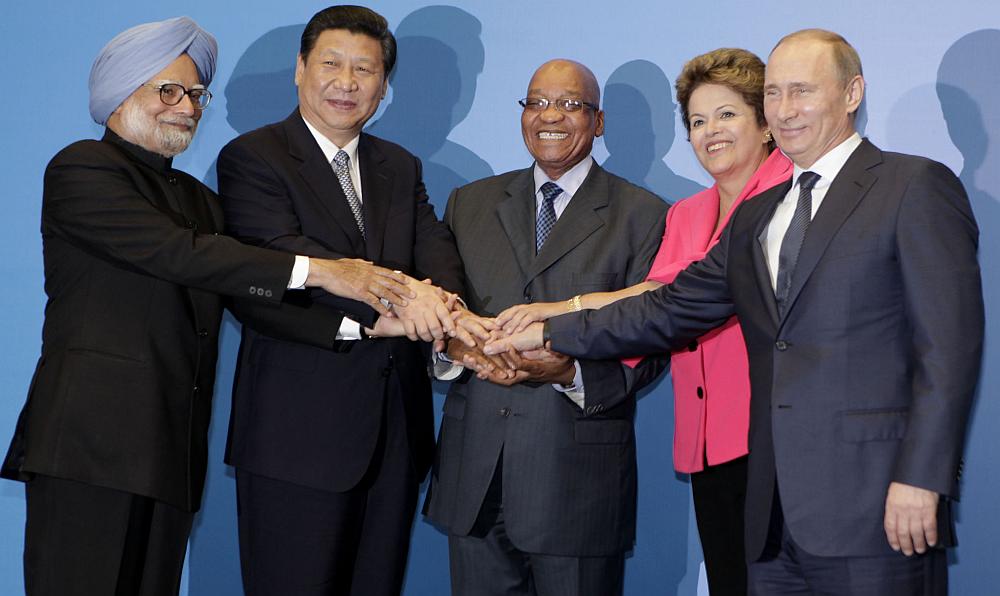 Onboard media interaction with Prime Minister on March 28, 2013 on return from BRICS Summit

Manmohan Singh: I have just concluded a very satisfying visit to South Africa for the fifth BRICS Summit.

As you would have seen from the BRICS Declaration, a number of important steps have been taken. I am particularly glad that some projects, which were either conceived at the New Delhi Summit of BRICS in March last year, or were piloted by India during its just-concluded chairmanship of BRICS, have registered important progress.

Apart from pursuing such cooperation that is for our mutual benefit, the BRICS Forum also provides its leaders a platform on which to consult and coordinate policy positions on issues of major international significance. I was glad to see once again that there are many areas in which BRICS countries have shared concerns and perspectives.

I also took the opportunity of my visit to have bilateral meetings with my counterparts. In particular, I had a meeting yesterday with the new President of the People's Republic of China. It was our first meeting and both of us agreed that we would continue to maintain the strong tradition of frequent high-level exchanges between our two countries to further strengthen our relationship. We also agreed that high level visits will be exchanged this year between India and China. I look forward to the opportunity of an early meeting with the new Prime Minister of China as well.

I also held a very productive meeting with President Putin, in which we reviewed progress in our bilateral relationship and major regional and international issues.

I understand in Durban that for the first time you met the new Chinese President. So how you assess your relationship with the new Chinese leadership whereas you had an excellent rapport with his predecessor?

Well even before the formal meeting, last evening, I had a very productive exchange of views with the new President of China on the sidelines of the Summit. We both agreed that the type of intimate exchanges that used to take place when President Hu Jintao and Premier Wen Jia Bao were holding their respective positions, and both of us agreed that we should aim to maintain similar relationship under the new leadership of China.

We are very excited about your first meeting with the new leadership of Chinese Republic. Can you share with us views exchanged specifically about water issue and what exactly is happening in Brahamputra?

We reviewed the whole gamut of our bilateral relationship and also discussed the opportunities that exist in exchanging views and coordinating our positions in various regional and international foras. I also took the opportunity to raise the issue of trans-border river systems and I requested the Chinese Government to provide a joint mechanism to enable us to assess the type of construction activity that is going on in the Tibetan Autonomous Region. The President of China assured me that they were quite conscious of their responsibilities and the interest of the lower riparian countries. As regards the specific mechanism that I had suggested, he said that they would have it further looked into. But as of now, our assessment is that whatever activity are taking place on the Bramhamputra region in Tibet, they are essentially the run-of-the-river projects and therefore there is no cause for worry on our part.

Continuing with the China question, the new President soon after he took over laid down five policy proposals in his dealing with India. Does he represent continuity? Do you see change in it? What are your own proposals in handling the relationship now?

This was my first meeting and both of us, I think, were keen to get acquainted. While we reviewed the whole gamut of our relationship, we did not go in depth into specific solutions for specific problems. But, I got a distinct impression that the new Chinese leadership is as serious as the former Chinese leadership to promote good neighbourly relations and to find practical, pragmatic solutions to outstanding issues between our two countries.

While we have been talking about multilateralism, all engagements seem to be essentially engagements with China by rest of the world (one sided engagement by world with China). How does China benefit from any economic deal? Are there any issues of joint multilateral collaboration? What are your views about it?

I think for us BRICS is a very important forum. It represents nearly 27% of the global GDP, about 40% of the world population and as such there is a growing complimentarity. Of course this relationship between India and China has elements of coordination, cooperation and competition. But for us it is very useful to have a forum like BRICS whereby we can exchange views not only on events which have implications for the management of our bilateral relationship, but also how the global system affects our interests and our concerns. So I find this as a very useful forum, I certainly value this opportunity annually to review the strength of the global economy, the events that are taking place in various regions of the world and events which have obviously implications for our own growth and prosperity.

Sir, you have staked considerable political capital on the nuclear deal but for the past two-three years your senior foreign policy managers have been trying to sort out the differences in nuclear liability law with other countries with which you have signed deals for nuclear plants. When do you expect all this to be sorted out?

We have been exchanging notes and papers. We have just received a note from the Russian side. I am confident that we will be able to find practical, pragmatic solutions to various issues that have arisen.

In your five point suggestions yesterday in the Plenary Session of BRICS, the fifth point was regarding the IMF and UN Security Council reforms. What are your expectations from the reforms?

I think as regards the Security Council, we feel, I think, there is a need to revisit Security Council membership taking into account the contemporary realities and countries like India should certainly find a place in the expanded Security Council. With regard to the IMF, the developing countries would certainly like to have a greater say in the decision making processes, in quotas and it is somewhat disappointing that the reform agenda which got a stimulus soon after the 2008 global economic crisis, there seems to be a slowdown in that areas. Therefore that is a matter of concern to us.

After support on Sri Lanka, Mamata Banerjee again has expressed her support on foreign policies. Do you think she will support on issues like Teesta in future?

I certainly hope that all right thinking parties and individuals will support the foreign policy initiatives of our government.

Obviously coalitions face issues. Sometimes, they give the impression that these arrangements are not very stable arrangements and I cannot deny that those possibilities exist. But I am confident that our government will complete full five years, that the election to the next Lok Sabha will take place on schedule.

Your party and the Government have been saying that Government is stable and will complete its full term. Does it still have political wherewithal to sustain reforms you had started a year back?

It is not a once for all set-up that we are seeking by way of reforms. Reforms certainly have to take into account the fact that we don’t have the majority to get the Parliament to approve some of our reform proposals. So we are certainly dependent on the goodwill of our allies and I would be the last one to deny that there are uncertainties. But even then, we are confident that the reforms that matter, and which are going to yield results in the next few months, we will be able to push them.

Given the fact that ally after ally are leaving UPA, do you think Congress party and your leadership has lost the ability to hold allies together?

I don’t share that view. I think that as I said, alliances do have compulsions which have to be taken into account. We will not allow these compulsions to derail the reform process or to create a situation where the essential task of governing this vast country of ours can be put aside.

In the 2014 elections, If the Congress President Sonia Gandhi and your party request you to accept third term, will you accept Prime Ministerial nomination for the third term?

These are all hypothetical questions. We will cross that bridge, when we reach there.

Post budget, we have seen a loss of momentum on certain accounts and the hopes that we raised from the budget don’t seem to be factored in the markets. Current Account deficit for the third quarter is at 5%. Your thoughts and views?

You are going to complete nearly a decade as Prime Minister—a long innings in public life. But many other world leaders have gone on to accomplish a lot more after 80. Do you still have the drive, the energy and the motivation to contribute to the Public life from now on?

I have tried my very best to serve this country with all sincerity, with all dedication. Whether I have succeeded or not, it is for the public at large—the people of India—to judge.

On the Italian Marines issue, there is a strong feeling that the central government is delaying the process un-necessarily?

As far as the two marines, who are accused of killing two Indian fishermen, this is now a story which is a part of the judicial process. The Supreme Court has looked at it and a Special Court has been set up. And I sincerely believe, that’s where the matter should be left. It would be much too presumptuous on my part to comment on an issue that is sub-judice.