"Mumbai does not speak Hindi, so why did Bollywood begin here?" And why not in Delhi? I added to myself. Cotton mills? Had to be in Mumbai because of the moist air. Cinema?

Three weeks ago, Rachel Dwyer, reader in Indian Studies and Cinema, School of Oriental and African Studies, asked a casual question that had me reeling. "Mumbai does not speak Hindi, so why did Bollywood begin here?" 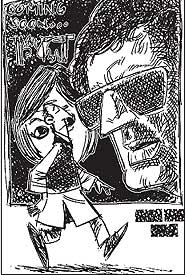 And why not in Delhi? I added to myself. Cotton mills? Had to be in Mumbai because of the moist air. Cinema? Anywhere is good but surely a Hindi language cinema should have been born in the heart of the Hindi belt?
No use saying Mumbai got a headstart because the Lumiere brothers came here first. No use saying it was all silent cinema in the beginning. No use saying Mumbai is an entrepreneurial space and Delhi a bureaucratic one. By the time language began to become an important part of cinema, the model was successful, fortunes had been made and anyone cou-ld have jumped onto the bandwagon
.
Delhi didn’t.

That’s odd. As soon as Alam Ara was released in 1931, surely it should have. It was the urban magnet closer to Lahore and Lucknow, from whence came the writers of merit who made Hindi cinema’s dialogues into a series of fire crackers exploding into what we call ‘dialocks’; who turned its songs into rich, decadent romantic feasts of courtly disembodied yearning and unrequited love.

But then, perhaps Delhi’s insistence on Hindi as she should be spoke (and who will establish that?) would never have managed the pan-national appeal of the Mumbai product. Take Yahudi (1958), for instance. Sohrab Modi speaks chaste Urdu in the rhetorical tones of the sophists we never had. Dilip Kumar speaks Urdu too, but in the everyday speech patterns of a nawab down on his luck. It works because Mumbai began as a polyglot, invented by Gujarati businessmen, including the Parsis and Muslim traders from all over the country. The resultant mess with its aapuns and tumkus made it into a language that the Rajasthani and the Gujarati and the Bihari could enjoy, even if the austere linguistic Brahmins of the cow belt looked down their noses at the rubble of language on display.

By the 1990s, there was such confidence that Mumbai no longer cared about Hindi per se. First came the tapori hero—pioneered by Amitabh Bachchan in Amar Akbar Anthony— and then came English. A Hindi film reviewer once complained to me that it was difficult to interview anyone on a Hindi film set because all the important people seemed more comfortable in English than Hindi.

What next? The English film seems to have taken root in Mumbai too. Other than Aparna Sen’s three English language films (36 Chowringhee Lane, Mr & Mrs Iyer and 15 Park Avenue) almost all the others have been made here. Looks like Delhi, which gave us one of the best local colour films in In Which Annie Gives it Those Ones, is set to lose again. Meanwhile, send us your National School of Drama best, send us your Jamia Millia editors and we’ll put them to use. They won’t recognise who they started out as, but then the lure of Lokhandwala will beat bread and water in a barsati any day.