Out With The Cash

So what explains the RBI decision to withdraw at least 8 billion bank notes issued before 2005, or roughly 10 per cent of the total currency in circulation? 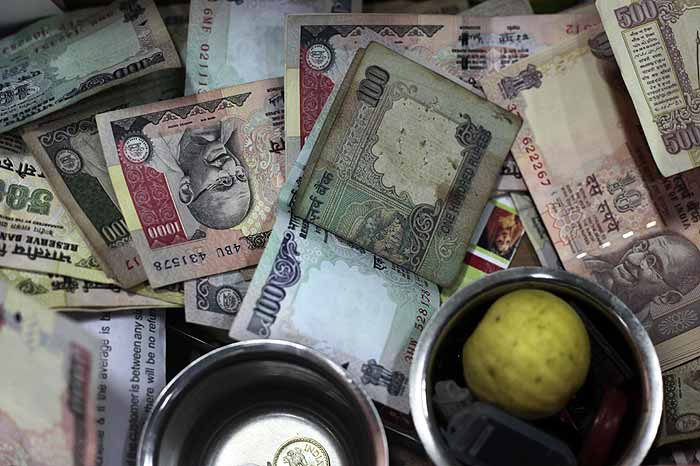 At least 8 billion bank notes issued before 2005, or roughly 10 per cent of the total currency in circulation, are being withdrawn by the central bank RBI. In a notice on January 22 evening, RBI did not give reasons for the partial denotification, which takes effect from April 1, 2014, months before the nation goes to polls.

The move triggered speculation that it will put older counterfeit notes out of action, while encouraging people to spend some of their ill-gotten ‘black’ money in the run-up to a hotly contested national election.

An RBI spokesperson confirmed the move, saying the old currency will continue to be ‘legal tender’—meaning that banks will not turn away those seeking to exchange the old notes for newer ones. From July onward, those exchanging the currency at banks will have to present proof of their identity, if they want ten or more notes in Rs500 or Rs1,000 denominations swapped.

The spokesperson said that “lakhs of crores” of money is in circulation at any given point, making it nearly impossible to predict the likely impact. No final date has been announced for when the swaps will end, perhaps to quell a rush to banks. “The swaps will keep happening until we notify otherwise. We have not specified a last date,” she says.

While the swaps are likely to continue well into the year or later, there are already reports of traders and small businessmen scrutinizing the reverse of currency notes offered by customers. If the reverse of the note does not have a year of issue, it will need to be exchanged according to the RBI’s decision. GK Karanth, professor, Center for Study of Social Change and Development, says the money he offered to a vendor, while on tour in Chennai on January 23, were carefully examined for this date before they were accepted. “Thankfully there are ATMs and we can just withdraw new notes if we need to,” he says.

He says the impact of the RBI move on black money—contrary to speculation that it will merely fight counterfeiting—will be quite significant. “The immediate thing that comes to mind after hearing of the announcement is ‘elections’,” he says. “But whatever the motive, some good will come of it for the economy—a lot of poor people may benefit. People with pre-2005 currency notes will come to the bank now, no question about it.”

Others, who won’t go to banks, will try and swap the cash ‘informally’, perhaps a few less well-off will make commissions on the exchanges that follow.

India’s black economy is notoriously large, up to 50 per cent of the economy according to some estimates, and calculated by the economic think-tank National Institute of Public Finance and Policy ( NIPFP) at 10 per cent of GDP last year. But only a few people now stuff cash into pillows, mattresses, under floors, or in clay pots buried underground. “Most of the money is circulating all the time in today’s economy. Real estate, foreign locations, gold—today the options to park funds in are many,” says Prof Arun Kumar, who teaches economics at JNU in Delhi and is an expert on the black economy. He says not to expect a rush for gold either. “Those who could afford to buy gold with the money they have—legit or not—have already bought it,” Prof Karanth also says.

Few have tax-unpaid cash just lying around today than during the sixties or eighties. Still, the experts say, there will be many who will crack open old bank lockers and safety chests at home to examine the reverse of notes. Many will have legit cash as well, though probably much worse for the wear, a decade on.

“They are targeting black money that is not being circulated as real-estate, gold, in stock markets and the like, not counterfeit notes,” says Karanth. “Consider the size of the withdrawal. If we had so much fake money floating around, the economy would fold up. It would amount to a severe failure of economic intelligence, which I don’t think is the case,” he says.

Kumar expects the move to be more of a petty annoyance—shop-keepers, typically, are refusing to accept pre-2005 notes, traders will also take it upon themselves to not deal in ‘old’ notes, disturbing businesses in general. “But it won’t go to the root of the black money problem, which is the nexus between corrupt politicians, corrupt business and corrupt members of the executive,” he says.

India’s recent history—and folklore—have a starry constellation of people who would have rushed to the banks on April 1, 2014, had they not already been caught red-handed or bought ‘flats’ and ‘farmhouses’. Sukh Ram, the former Congress telecom minister, had Rs1 crore in a ‘box bed’ at home that he couldn’t account for. The Tripura CPI(M) leader, Samar Acharjee, laid on bundles of currency that he has claimed was legal but a probe is on. The CBI also claimed, last October, that it recovered “unaccounted” cash worth Rs25 crore from the lockers of Hindalco, an aluminium major. .

Considering the size of India’s GDP—Rs1.10 lakh crore in 2012—even expensive elections are affordable, ultimately, making black wealth a mere drop in the ocean, according to Kumar. If Rs50 crore is spent over the next three months in each of India’s 540 constituencies, that’s roughly Rs27,000 crore—not even 1 per cent of the economy and not 0.1 per cent of the five-year GDP between two elections.

S.L. Rao, a leading economist, says the RBI move is a “sensible” one. He, too, believes that most black money has probably been parked in off-shore destinations, but fake currency rackets nevertheless be slowed by this decision. “There is undoubtedly a challenge of counterfeit and fake currency. The pre-2005 bank notes are mainly vulnerable to imitation, having fewer security features. This will help bring those notes out of circulation,” he says.

Last December, a day after Christmas, the National Investigation Agency (NIA), claimed its forensic analysis nailed Pakistan’s effort to print a convincing version of Indian currency. Unknown amounts of fake Rs 500 and Rs 1,000 notes in particular are said to be circulating in India, with potentially disastrous consequences for the economy.