Sujata Pandey hails from a small town called Ara, located in Bihar. The journey from Ara to the corporate world to becoming one of the media's finest panellists was long but passionate. 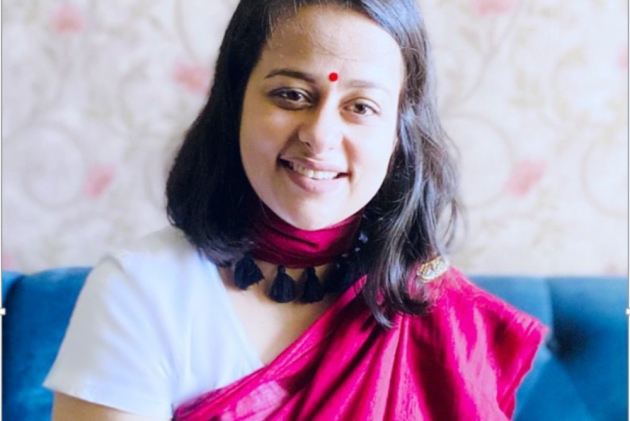 Sujata Pandey, a media panellist and a women's rights activist, believes in the in-depth exploration of various social, economic and political agendas and presents the audience with information loaded with facts and research.

Sujata believes in the power of vocalising her opinions, mainly through video-based content and has gathered a huge viewership in a short period of time. She says," In order to change things, begin with yourself. In order to truly change things, give them a voice no one can avoid."

Sujata hails from a small town called Ara, located in Bihar. The journey from Ara to the corporate world to becoming one of the media's finest panellists was long but passionate. She has seen talking about various topics, primarily women empowerment.

Let's explore her Journey through Q & A Session in her own words:

Q1- How she achieves to be a top Media Panelist starting her journey from the small town of Bihar?

Answer- Her life has been an adventure of sorts. She is from a small town located in Bihar, and it took a lot of hard work and good education to move from there to climb the top of the corporate ladder. She liked her work in the corporate world. It was innovative. During that time, She travelled a lot. She visited a lot of countries but somehow, throughout her career and during her travels- She felt a void. As if something needs to be done. It was not very difficult to notice what it was.

In her own words, "Being a woman myself, I couldn't help but notice the plight of women. Women were struggling at all levels. Especially during my travels- I noticed that women in other countries are no less deprived than the women in India. I couldn't help but notice the charade in the name of women empowerment. I was overwhelmed. I wanted to help but was helpless. There's only so much you can do for the nation when you're in a corporate setup. I knew I needed a free hand. So, I quit my job, and here I am."

Answer- Yes, obviously, she did not figure it out immediately. Actually, she was observing the scenario, and her mind was full of questions. Questions like- why are women in such a backward condition? Why are governments or their schemes not doing their job effectively? More and more research on this is haunting. It was devastating for her to know that so many people were advocating change, but it was not exactly happening, just like doing lip service only.

Like, the ever famous Women's Reservation Bill. Plus, more than that, she realised that people were not embracing correct information about various issues. She decided to take matters into her own hands. It was her enlightenment, you could say. She thought videos were a good way to connect with the audience at large. Now, she has her online channel known as "Sujata Pandey". It serves as a portal for rigorous discussions, conversations on topics and facts that are often missed by mainstream media. In her own words, "So, it's been a ride, but I'm glad people are getting educated by my videos. I'm happy with this because I know I'm a part of the change that's happening: slowly but surely!"

Q3- Sujata Pandey is frequently seen talking about women empowerment. She seems enthusiastic about it, but how does one begin to solve this spiral of empowering women?

Answer- In her own words, "Interesting that you call it a spiral because it is indeed a spiral. If there's a policy, then there's no effective data collection to implement it. If there's data, then it's not in alignment with the actual, ground-level problems of women, and all of that can be altered if there's maximum political intervention."
According to her, A very cohesive approach is needed to empower women. One way to unweave this spiral is to include women directly in the decision-making process. She was needed to give women empowerment a lens of women. She talks about it at length on her channel.

Q4- Currently, the entire world is watching Afghanistan Affairs closely. What are the implications of this crisis for India? How should India deal with this geopolitical situation?

Answer- She thinks India has taken a right stand with the 'Wait and Watch' policy towards Afghanistan. There are wider implications of the Afghan crisis in India in terms of migration, terrorism, fundamentalism, drug trafficking, and security concerns. It is a fact that our neighbouring countries China and Pakistan, are supporting the Taliban openly along with some other countries. For security reasons, India cannot and should not undermine the Pakistan- China nexus.

India's external affairs policy must consider both internal and external security implications, and the government should be on high alert. She says, "There would be a need for a collective approach in dealing with challenges of terror and fundamentalism. Modi government acted quickly to garner support from all political parties on Afghan affairs, and that would certainly help in taking a collective course of actions depending upon the emerging situation."

Q5- Next year, there will be Assembly Polls in 5 States, including Uttar Pradesh. What are your predictions as a Political Analyst? What would be major issues for these elections?

Answer- Despite all speculations around the Farmers protest & Covid crisis, the Yogi Adityanath government is still returning to power once again. Although opposition parties are trying to put pressure on the grounds of farmers protesting against the Centre's new farm laws and the handling of the second wave of COVID-19, they are not going to make any big change in the numbers. On the other hand, AAP is a serious contender in Punjab. It is going to be a tough battle for Congress.

Due to the improved law and order situation, the saffron party in UP has improved a lot. Moreover, social engineering-based caste politics would be another option for the party.

In UP, Muslims accounted for 20 per cent, Dalits 20 per cent, upper castes 20 per cent and Other Backward Castes (OBCs) 40 per cent of the votes. The sliding of the nearly 40 per cent votes (Dalit and Muslims) and a considerable chunk from OBC (Jats) can write a different electoral story in the state. There will be several factors and forces that will determine the outcome in Uttar Pradesh.

Q6- What do you have to say about the COVID crisis that has gripped the nation?

Answer- Easier said than done. For such a humongous crisis, you cannot put the blame on one government or any single person and demand a solution from them. This crisis is a manifestation of years of neglecting important issues. When was the last time any election was fought on the promise of a hospital? When was the last time we demanded a hospital? In her own words, "I'm disheartened to see the situation right now, but as citizens, we need to educate ourselves of our rights. Governments have done a better job at working for the long term benefits of the public. We need to think ahead of us- for the future. And right now, we all need to practise safety as a citizen like we should take the vaccination as self mandatory.

Sujata Pandey is truly meticulous with everything. She thought all of us should try to cultivate more critical thinking. In her own words, "You should know, to look beyond what's in front of us. To look at the details because that's where the truth is." It helps us ask more comprehensive questions, and once we start asking the right questions, change starts to take place- directly or indirectly.

So, this was Sujata Pandey and her inspiring journey from a small-town girl to becoming an eminent Media Panelist with a huge viewership. Her story breaks stereotypes, affirms our faith in going after passion and tells us that no obstacle is too scary. It just takes courage and a humble being to sustain all of it.