A Murder Most Foul

Watched Sohaila Kapur’s video play, Ra(A)nn based on Ronald Dahl’s short story. Kapur has a penchant for the para normal amd mystery, and Dahl is a writer for all ages. The fit was perfect, and the play is short enough at 30 minutes, to keep one engaged.

It’s Kapur’s first digital adventure and she has kept all precautions in mind. Except for the married couple who play husband and wife and are filmed in their own hI’m e, everyone else is participating from his or her own space.

The story is about a senior detetive’s murder. His juniors are summoned to the scene of the crime to the couple’s living room, where the man lies, quite dead. Cause of death is determined to be a heavy blow to the man’s head. The distraught wife was away buying vegetables to supplement the meat she was cooking for him.…a leg of mutton, his favourite dish. The dastardly deed was committed by the murderer who took the opportunity to quickly slip in and fell the victim.

Nothing is disturbed so robbery is not a motive, the juniors surmise, and the swift intruder, who must be known to the victim, who has opened the door for him, has escaped unnoticed carrying his weapon with him. A blunt club or baseball bat, it is obviously not been hidden away in the house. The police search goes on, while simultaneous attempts to calm down the distraught wife continue.

Of course, the crime is a perfect one, and the murderer gets away; the police on the job none the wiser. But in true Dahl style, we the audience are let into the secret of the murder after everyone else has given up.

No spoilers here, better you watch it for yourselves.

Kudos to Kapur for keeping herself engaged in directing a play, between shoots for ad films and the serials like Family Man and Aarya. She creates the domestic scene quite well, with the appropriate film song portraying the eager wife waiting for her husband to return from work, as she knits sitting in the living room. The actors play their roles with conviction, despite the actual separation-by-pandemic. 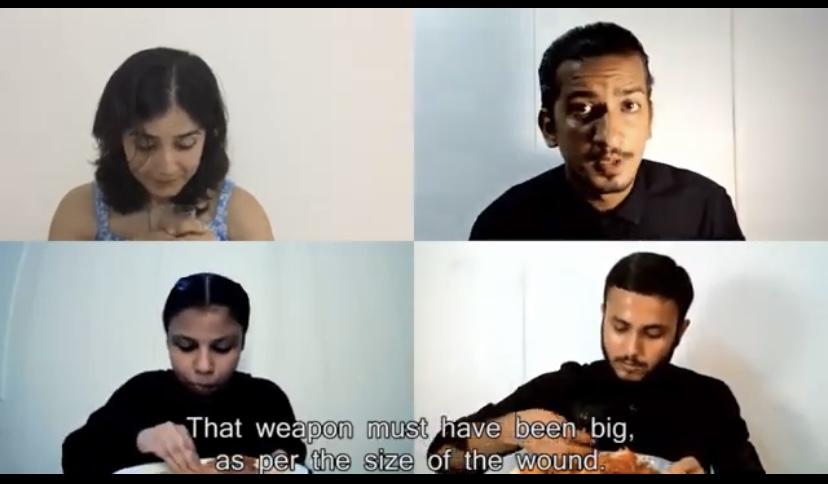 But when it comes to the dialogues by the police and their interactions, both director and actors have erred a bit, as they look directly into the camera and not (supposedly) at each other or into the room as they speak or hold dialogues. Don’t let it bother you, am sure the next digital production will ensure it’s all more natural and realistic.

If you like a little harmless tingle to your spine, or to play a guess-the-motive-and-the-murderer game, click on to the Three Arts Club presentation