A Year End Reading List For Every Book Lover

2021 is about to end and here is a recap of books and author readers over this year. 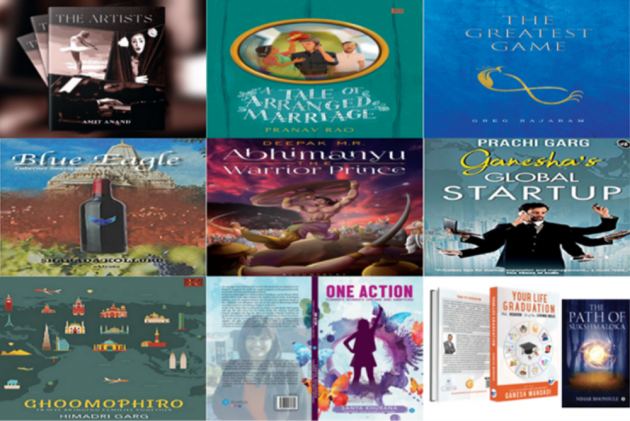 2021 is about to end and here is a recap of books and author readers over this year.

The city is in tatters. Destruction and death are at every corner. A mysterious race of Rakshasas seem to be at war in the beautiful city of Mumbai which was a home to several innocent humans like us. Yet, there are two heroes fighting the Rakshasas. How did all this chaos begin?

Earth has been impacted gravely by a dangerous tear in an astral seal. Dark forces have risen, who seek to either destroy humans or corrupt them. The wrecked seal however, has blessed certain individuals with magical boons and knowledge of ancient yogic warfare, The Dharmayodhas. Their general, Harshwardhana believes they can win, until he discovers a bone-chilling secret of the dark forces.To know more do read the book.

2. “Your Life Graduation”: A Road-Map for True Life Fulfillment and Contentment by Ganesh Mandadi

Born to Arjuna, Abhimanyu was Krishna favourite nephew and the grandson of Indra. He was a maharathi at the age of sixteen, who was destined to rule Hastinapur. The apple of everyone’s eye, why did fate so cruelly cut short his life? Why didn’t Krishna save him? Why couldn’t his legendary warrior father save him? Abhimanyu is the story of a young man in his quest for love, valour and honour. Experience his struggles to become a great warrior, and join him in his quest to find his father. Exult as he finds love in Uttara and enjoys life with his family. Accompany him to the battlefield where his destiny awaits him.

4. A Tale of Arranged Marriage by Pranav Rao

Ayaan does not wish to get married. In his late twenties and a product of urban, upper-middle-class society, he has had a comfortable life. Juggling his time between setting up his new business venture and lounging with friends—and frequent escapades with beautiful women and booze—life seems to be going well. Until one morning when his life hits a roadblock in the form of his overprotective, authoritative mother who only wants what’s best for her son. And this time, it’s in the form of marriage…arranged marriage. A reluctant Ayaan gets entangled in the frustrating and exhausting process of meeting women chosen by his determined mother, who refuses to stop till she has what she wants. Will Ayaan find his perfect match or does the universe have a different path laid out for him?

5. One action: Towards women’s dreams and ambitions by Sanya Khurana

In this book, Sanya refers to patriarchy as a bug in human minds, which starts growing at a very young age and evolves as one grows older. She talks about how Indian Media, India Film Industry, certain Indian Rituals and Customs increase the strength of the bug in the human minds; effects of 'Log Kya Kahenge' ( what will other people think?) Syndrome on gender roles; and how unsafe cities become a psychological barrier for women. In the second half of the book, she covers the 3 B's -- Be Yourself, Be Powerful and Be Bold -- that she learned spreading the Lean In Movement in the country and some ways of dealing with various stressful situations. In the last chapter, she writes about her journey on how she gained the courage to start a Lean In Circle, how it grew into a Lean In India Network and who all she met in her journey.

Neil Randhawa, a sommelier from Italy, lands in New Delhi to fulfil a stranger’s wish of offering
a wine called Blue Eagle to God Kal Bhairav in Ujjain. But unfortunately, he loses the wine
bottle worth four crore rupees as soon as he walks out of the airport. Therefore, he goes to a
police station where he narrates his life involving his mother Rashmi Randhawa with whom he recently had a conflict that serves as a catalyst to the story forward.

7. The Greatest Game by Greg Rajaram

Ever since humans became self-aware, we have struggled to find the meaning of life. The price we paid for becoming intelligent was to become painfully ignorant of the difference between good and evil. Adi, a 10-year-old boy, works together with two old philosophers as they try to unravel the prophecy of a promised King. With insatiable curiosity, Adi must work with the wise men as they rationalize with each other on why and how humans became intelligent. Together they attempt to answer some of the most profound questions related to existence. Does evolution end with human beings or is there an ‘Overman’ who can reach evolution’s pinnacle? Will this Overman be able to define values for humankind?

8. The Artists by Amit Anand

Sahana Roy is a ballet dancer. Aarav Verma is a pianist. Manvita Joshi is an actor. On a train journey to Delhi, the three meet each other for the first time. They were asked to deliver a performance at the National Arts Festival. However, the theme of the performance was yet to be disclosed to them. As they start mingling, the night unfolds into their individual stories from the past. Will Sahana find her closure? Will Aarav be free from his inhibitions? Will Manvita find her purpose? The Artists delves into three tales of relentless passion and takes you on an enthralling ride into the world of dance, music and theatre. About the author: An engineer and an MBA from XIMB, Amit had an inclination towards the artistic world since childhood, rousing his interest in storytelling and music. Apart from the usual hustle-bustle of life, he loves writing poetries, playing music and watching sci-fi movies. Amit works at HSBC and lives in Kolkata with his college sweetheart turned wife - Oindrilla. The Artists is his debut novel.

Ghoomophiro is the story of two sisters Nikita and Kritika and a trip they take with their family. The story is set in the future when gadgets occupy a large part of everyone’s lives. People experience places and things virtually rather than “the old-fashioned way”. A time when many places, wildlife and plants do not exist on the surface of the earth and man’s incessant usage of natural resources has had some devastating effects.

Nikita and Kritika are worried that their family spends more time with their gadgets and work than with each other. When they manage to get their family together to go on a trip, they both make sure that it is a life changing experience for them. The two sisters have been travelling together for more than two decades and through this trip they share their travel tales with everyone. They also have many pearls of wisdom to share with them and each chapter in the book talks about one such pearl with the family trip on going in the background.

A foodie at heart, Ganesha always looked for ways to make life worth living. In his entrepreneurial journey so far, he had seen it all – starting from a failed start-up to bagging the ‘entrepreneur of the year’ Award. With the achievement came the urge to expand the business with series-b funding and beyond. Weaving Indian mythology with entrepreneurship lessons for newbie entrepreneurs, this book charts the journey of going over and beyond in the start-up game with the right learnings. Ganesha's global start-up is a gripping tale of an entrepreneur's challenges when he wishes to expand and ways in which he beats all odds