They have been successful in politics and have also contributed to the world of information technology. 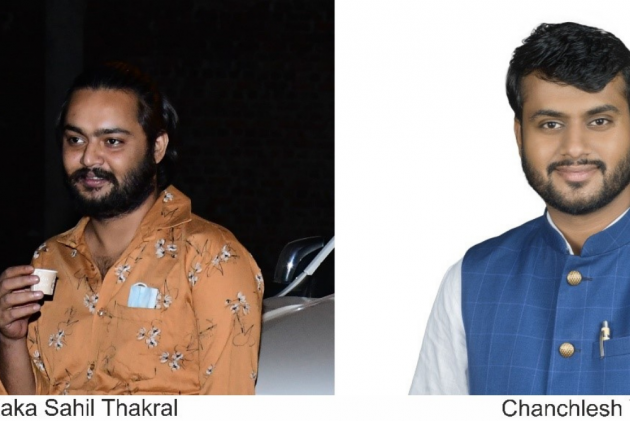 'Leaders are not born but made.' No one was ever born a leader. And in the case of such a populous country like India, it is nearly impossible to play the role of a leader efficiently having so many people working under you. Yet, some people withstand every situation and prove to be the best leaders ever encountered. Such is the aura of our two vividly skilled leaders- Kaka Sahil Thakral and Chanchlesh Vyas, who stand as a source of enlightenment for the modern youth. They have been successful in politics and have also contributed to the world of information technology.

Kaka Sahil Thakral, from Jamalpur, Bhiwani, Haryana, is the youngest contestant of the LOK Sabha Election 2019.

Chanchlesh Vyas, who comes from the small town of Piplia Mandi, Mandsaur, Madhya Pradesh, was appointed as the GS (General Secretary) of NSUI (National Students Union of India) in the Mandsaur District in 2011.

Before heading towards their contributions in the technological world, let us first know why both leaders went for information technology and not others. The expression 'information technology has numerous diversifying intents in the same way it has a sweepingly wide presence. They covered a range from the most mundane things that a common person does to the most intricate works that only a technically long-headed person infers. Information technology spreads its hands all across the processes involved in improving services to citizens and consumers, increasing governments' productivity and efficient working (computerisation of government records, departments, e-cops), upholding the legal and law enforcement systems (Judicial administration and Court Management).

Both of the leaders are also well aware that a large scale involvement of our businesses, industries, economies, hospitals, and governments is seen in the information technology world. Their understanding of the technological world shows us the importance of knowledge of one's field of specialisation. The technological world has simplified the most critical situations, thus making the impossible things possible. Allowing large proportions of data to be cut down to high-density, compact storage has led to smooth data transmission. It has helped accelerate speed, and even the most sophisticated calculations can be solved within seconds. The advancement of the technological world has also led to the miniaturisation of processors, which has facilitated worldwide connectivity and communication. Thus, it is clear that the leaders have the most updated information that makes them more authentic and trustworthy.

They proved that their thought process was never stagnant, even in politics. They have always updated themselves with the modern world trends, which is one of the most important characteristics of a good leader. Kaka Sahil Thakral and Chanchlesh Vyas have aptly adopted and efficiently exploited social media to meet their ends. The significance of social media does not resemble what it was earlier. Before introducing social media, our society was much like the stagnant ones where development was synonym to a blue moon.

Social media has shifted and altered the mediums through which we access information from the news. This is one of the reasons why social media has been approved and accepted by larger percentages of the population in the contemporary world. This proved beneficial for the leaders since the information has become open-ended and is one of the significant keys to democracy. Both of them have abided by the principles of democracy in the truest sense.

Any country can be judged and analysed based on its politics and its members. So, when we think of political campaigning, the significance of social media cannot be overlooked as it influences the candidates running for the election. Thus, Kaka Sahil Thakral and Chanchlesh Vyas have made good use of social media and made it a boon for themselves on subjective and objective levels.

Chanchlesh Vyas, on the other hand, joined Indian Youth Congress, Madhya Pradesh, in 2013 and worked with his high aspirations under the leadership of Youth Congress President Kunal Chaudhary. He was allotted the role of coordinator in the Youth Congress IT Cell. The main objective of Chanchlesh was to support the youth in every way.

The modern world is a digitised one. Almost every sector of the industry benefits from this technology; thus, the leaders have not kept themselves and their political campaigns aloof from the benefits of the technological industry. Our leaders have never failed to adapt to the new digital marketing trends to assist their candidature and communicate with the common people and audience.

The struggle of Chanchlesh Vyas also grabbed the attention of people. He worked continuously for two years as an IT Cell Coordinator, too, when no one was familiar with IT cells. Vyas got enrolled in the IT sector, making the youth fond of it. On Aug 23, 2019, Chanchlesh sat at the President of the Indian Youth Congress Madhya Pradesh IT Cell. He was also rendered the position of the chairman of the public participation of Atal Bihari Vajpayee Government College Piplia-mandi on Oct 23 2019. Chanchlesh Vyas and his team have successfully built an entirely new social era of politics under Madhya Pradesh Congress chief Kamal Nath and Madhya Pradesh Indian Youth Congress President Vikrant Bhuria.

On the other hand, Kaka Sahil Thakral is serving in Celebrity PR Management, SEO, Brand Creation and Brand Management. Managing all these, he is also taking the responsibility of Political Marketing consultant, which envelopes the tasks of advising and handling political campaigns for leaders. With his laden bags of experience, he is also training several more than 500 professionals in digital marketing.

His work has been acknowledged and appreciated by people. He was awarded Best digital marketer of Madhya Pradesh in 2019 by Research Foundation in India. He was also honoured by the Higher Education Minister Of Madhya Pradesh, Shri Jitu Patwari Ji.
Being well aware of the benefits of online platforms, he has also started his e-commerce platform for Online Furniture, with their seed funding being regulated by GKW Retail Solution Private Limited, Delhi. After just one year of dedication, now shop.gkwretail.com is one of the most reliable sources of buying furniture online in India with more than 8000 products in more than 70 home & office furniture categories.

Thus, it is transparently clear that both the leaders-Kaka Sahil Thakral and Chanchlesh Vyas, have successfully plugged in with the modern trends making their competitors green around the gills.