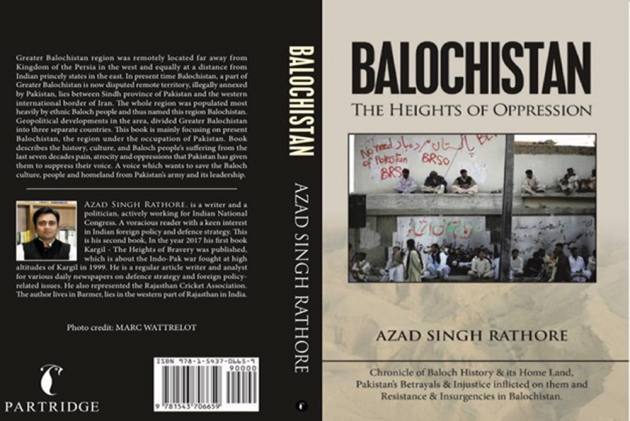 Azad Singh Rathore's new book "Balochistan: The Heights of Oppression" uncovers and brings to light the continued yet largely overlooked atrocities and inhumanities inflicted by Pakistan on the land of Balochistan and its people.

Despite being one of the four provinces of Pakistan and the largest in terms of land area, Balochistan has remained majorly disadvantaged and underdeveloped, and its people are incessantly subject to economic, social and political marginalization and exclusion.
In his book, Azad Singh Rathore aims to provide proper context to the readers and has given brief but not slight descriptions of Balochistan's history and the numerous events that led to its annexation and perpetual subjugation.

Azad's book comprehensively encapsulates revelations about the various human rights violations, economic and social manipulation and wrongdoings in Balochistan committed by the Pakistan Government, agencies and organizations. For example, international human rights organizations are more or less deny to ground access, the media and freedom of speech are oppress, and the armed forces continuously suppress the freedom movement. To date, Balochistan grapples with attacks on its cultural identity and struggles to protect its individuality.

The author has used credible research, statistics, and documented evidence and incidents to substantiate and validate his arguments and justify the demands of the Balochistan people that have received zero to little attention from the world. The book also features an exclusive, in-depth chapter written by Doctor Naseer Dashti, a renowned Baloch scholar and writer living in exile.

Azad Singh Rathore's "Balochistan: Heights of Oppression" highlights the concern towards the region's challenges and adversities and acknowledges its persistent efforts to deal with them. The book is an easy read but, at the same time, an intensely informative and explanatory one that connects the reader and displays the potential to awaken people to the truth of Balochistan. The author is a young Congress politician from Barmer in the state of Rajasthan and has previously penned an insightful book on the Indo-Pak Kargil war.