With a passion for realising the vision of ‘Atmanirbhar Bharat’, Garden Reach Shipbuilders and Engineers Limited (GRSE), a leading warship building mini ratna public sector company, is at the cusp of a major transformation facilitated by its knowledge, skill levels and operational capabilities gained over the years, brand equity, a healthy balance sheet and a dedicated team at the helm.

Set up in 1884 to repair vessels of River Steam Navigation Company, GRSE has several achievements to its credit in its long journey and is the only Indian shipyard to have delivered 107 warships to Maritime forces till date. First Indigenous ship for Indian Navy post Independence was built by GRSE, the Seaward Defence Boat (SDB) INS Ajay in 1961. GRSE also built the first ever Indian Export Warship “CGS Barracuda”. Based on the long association and contribution of GRSE towards indigenous warship design & construction program of the Indian Navy, GRSE was awarded the contract for construction of 03 nos. Advanced Frigates under Prestigious Project 17-A.

As part of Make in India initiatives of Ministry of Defence, GRSE has made commendable progress by successfully incorporating a high percentage of indigenous equipment fit into the ships being built for the Indian Navy and Indian Coast Guard. This is evident on-board Kamorta class ASW Corvettes, the first warship built in the country with indigenous DMR steel and overall 90% indigenous content with a unique feature of superstructure made of carbon fibre composite material. The Landing Craft Utility (LCU) ships, designed in-house by GRSE also achieved similar distinction. The company so far has delivered eight such LCUs Mk IV ships to the Indian Navy. 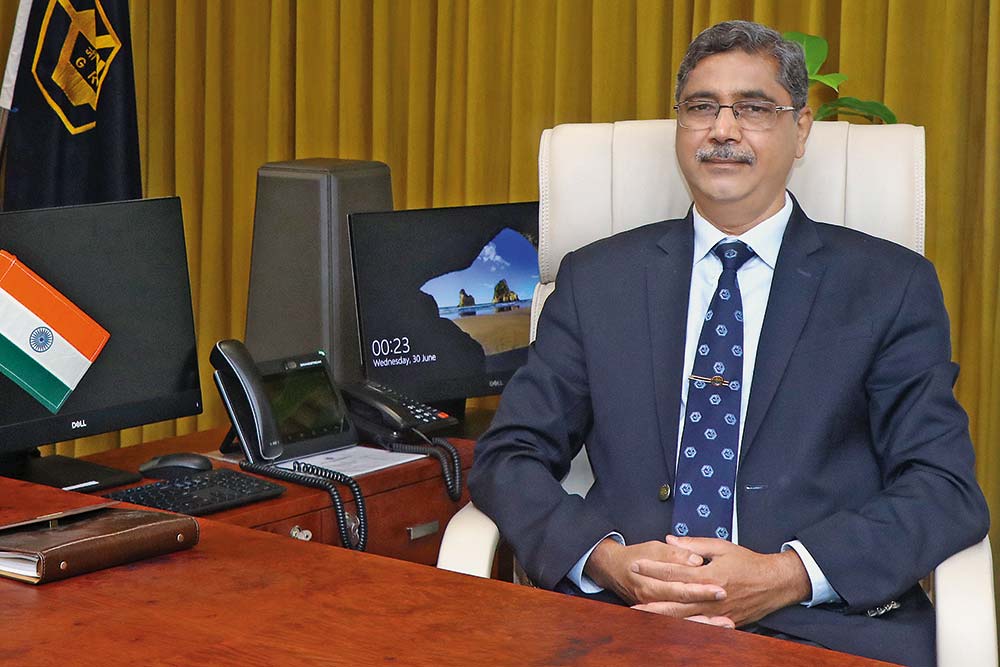 The company’s in-house design capabilities remain its major area of strength with the multi-disciplinary 100 plus design team working towards developing various concept designs for current and future warship projects aided by state-of-the-art Virtual Reality Lab. Offshore Patrol Vessel, Landing Craft Utilities, Survey Vessels (Large) and ASW Shallow Water Crafts have been designed in-house by GRSE. The company’s Design and R&D Department has received recognition from the Department of Scientific and Industrial Research (DSIR), Ministry of Science & Technology, for its performance.

The Bailey Bridge division of the company has been keeping pace with the ship division in its R&D efforts in designing and developing new products. During the fiscal year 2019-20, this division developed and successfully carried out trials of new products including First of its Kind Man Portable Pedestrian Assault Bridge which is made of light weight carbon fiber reinforced composite material for the Indian Army, 140 feet Double Lane (7.50 m wide) and 190 feet Single Lane modular bridge, both being 70R class load capacity and made of 7 feet panels.

To expand its reach, GRSE is keenly exploring Non-Defence shipbuilding market for building special ships like Pollution Control Vessels, Air Cushion Vehicles, Research Vessels, Dredgers and Boats, River crafts etc. GRSE is also giving the necessary impetus to ship repair business. The company plans to upgrade and expand business of pre-fabricated steel bridges, engine and engineering products. To maintain its competitive edge, the company is shifting to smart manufacturing (Industry 4.0), through thrust on innovations in automation, robotics and the industrial internet of things. It is also introducing Artificial Intelligence, Machine Learning, Interoperability and secured connectivity enabling real time monitoring. This control and optimization of processes, resources and systems is expected to help in workload consolidation across Design, Production & Supply Chain Management, significantly in the future.

GRSE has always been instrumental in creating an eco- system of development around its vicinity. As the legacy continues to grow over the years & with adoption of new-age smart business solutions, GRSE has been contributing to the ecosystem with strategic focus on the following aspects:

Procurement from Local/ MSME Vendor Base

GRSE has been outsourcing work to local MSME vendors for many years now. This has led to the creation of a local network of small businesses giving a sturdy boost to the small and medium sector organisations operating in Bengal. Vendors are associated with the shipyard in long-term partnerships ensuring steady business and sustainable livelihood. In the last 10 years, procurement from MSME / NSIC has been close to 25-30 % of the total procurement.

Close to 85-90 WB based MSE/ NSIC vendors are currently servicing GRSE across various subcontracting jobs, which is much beyond the minimum mandatory nos. as stipulated by the Govt. Around 3000 local manpower is engaged through sub-contractors for multiple service jobs across the GRSE Units.

Over the last decade, GRSE has organised Health Check-up Camps, Blood Donation Camps for under privileged people. Apart from this, the shipyard has also conducted a large number of cataract surgeries for needy people.

Over 3000 local youth have benefitted from the Vocational Training, advance computer Training programs as part of Skill India Program. Girl students were benefitted by company’s Vocational training programs. GRSE has developed training facilities and infrastructure across three Industrial Training Institutes (ITIs) in the state. GRSE in association with Indian Institute of Cerebral Palsy (IICP), Kolkata has been adopting three classes every year and providing infrastructure support including customized mini bus for facilitating transportation of special children. GRSE has also distributed aids & assistive devices to 912 beneficiaries with disabilities in association with ALIMCO. 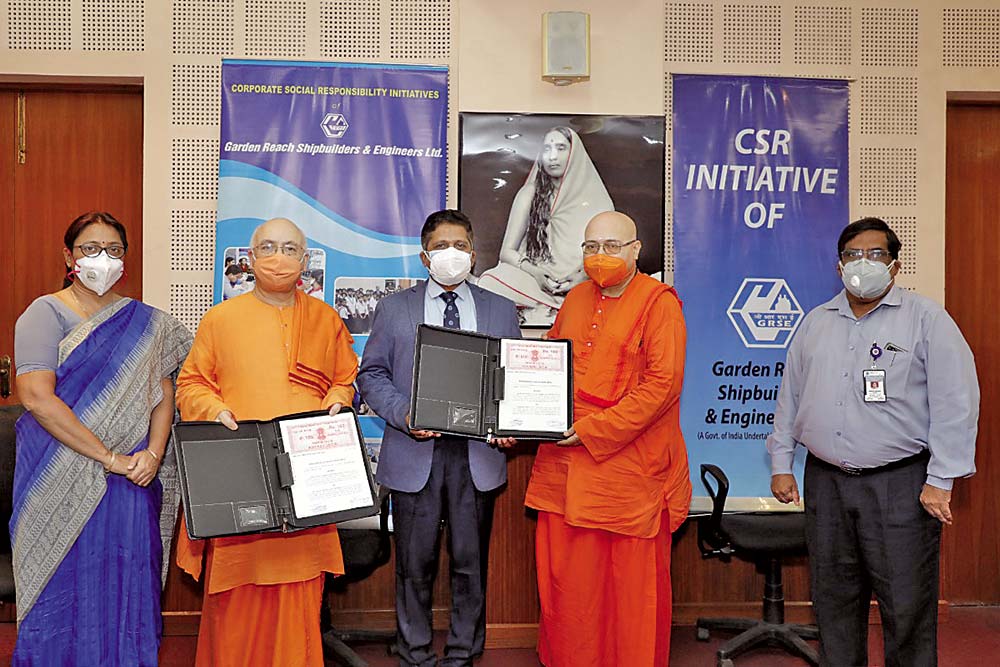 GRSE has adopted a robust mechanism in the arena of WASH (Water Sanitation & Hygiene) by undertaking construction & maintenance of over 400 toilets under Swachh Vidyalaya Mission including installation of incinerators in six local girl schools.

In rebuilding the economy and in light of the COVID-19 crisis, India’s premier warship builder has stepped in through various measures to contain the crisis. GRSE contributed Rs 1 crore to the Prime Minister’s Citizen Assistance and Relief in Emergency Situations (PM-CARES) Fund. GRSE distributed covid relief materials to over 450 families living in and around the vicinity of the shipyard along with handing over of 50 Medical Oxygen Cylinders to District Administration.

GRSE signed MoUs with three renowned hospitals in Kolkata to set up Medical Oxygen Plants under its CSR initiative. GRSE donated ambulances to Ramakrishna Mission, Belur Math during Second wave of Covid-19. The Shipyard has set up a dedicated Covid Vaccination Centre at GRSE Main Unit and administered over 5000 doses of Vaccines to permanent and contractual employees.