Rarely do they think of flywheel energy storage, a far more dependable and stable form of energy than its better-known counterparts. 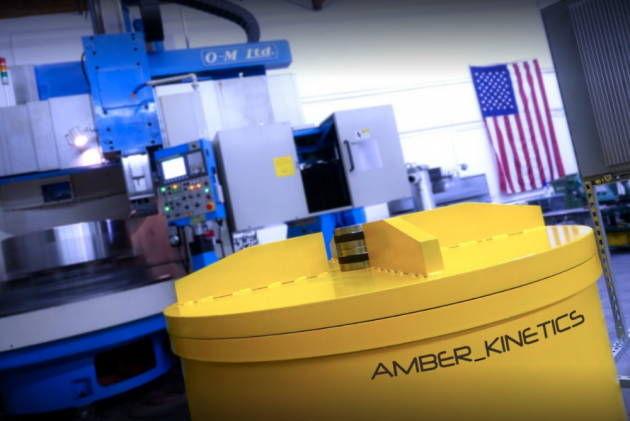 Clean energy. It is the buzzword on everyone's mind. When people hear the term, they mostly think of wind and solar energy. Rarely do they think of flywheel energy storage, a far more dependable and stable form of energy than its better-known counterparts. Amber Kinetics, the global industry leader in kinetic energy storage systems, aims to educate people on its ground-breaking clean, renewable energy storage option for India.

What is Flywheel Energy Storage in India?

We have all seen old movies when a man peddling a bike manages to illuminate a lightbulb through his exertions. Many of us might have had a bike with dynamo lights that did the same thing. That's the concept behind kinetic energy, except no one has to peddle a bike to create it!

Flywheel energy storage systems in India and elsewhere use kinetic energy, or the energy of motion, in this case, a flywheel, to create and store a stable, dependable form of energy. To increase efficiency, a flywheel is housed in an almost frictionless enclosure and is supported by magnetically levitating bearings. On top of that, it is operated in a vacuum to reduce drag. The net result is a streamlined, highly effective energy production and storage form.

As you may have surmised, using flywheels for energy is not a new concept. Over the years, they have been used to propel early torpedos in the late 1800s and power Swiss buses through "gyro wheel" in the 1960s

What Makes the Flywheel the Future of Energy Storage in India?

Flywheel energy storage is safe, low cost, sustainable, recyclable, highly efficient, and scalable without the use of any chemicals or any hazardous waste disposal. Impressive, isn't it? Let's drill down, or rather spin those ideas around a little.

Safety & Recyclable: Some of the most efficient flywheel storage systems use materials such as carbon fibre that combine high tensile strength with low material density. These are non-hazardous, easily recyclable. They do not require the use of an AC to regulate the temperature and can operate efficiently in both hot or cold environments without any risk of a fire hazard.

Efficiency: Operating in a vacuumed environment with frictionless enclosure means that there is nothing that gets in the way of a flywheel operating to its maximum capability. Unlike wind and solar power, which rely on the vagaries of the weather to generate energy, a flywheel operates in a highly controlled environment where energy production and storage can be maximised and easily predicted.

Scalable: You can scale its energy production and storage if you have the space to store a flywheel. It is not dependent on a fortuitous oil strike, gale-force wind, or heatwave in India to scale up production.

Sustainable: Unlike solar panels, which have a median degradation rate of about 0.5% per year (the rate could be higher in hotter climates and for rooftop systems) and chemical batteries (lithium-ion batteries are degrading from the moment they are first used), flywheel systems do not degrade over time and thus have a very low operating and maintenance cost.

No chemicals or hazardous waste: The move away from fossil fuel production was founded partly on the need to eliminate the by-product of chemicals and toxicity from the environment, oceans, lakes, rivers, streams, not to mention miners' lungs. There is no such issue with clean energy. While wind, solar, hydro, and geothermal power are doing their part to nurture the world away from traditional energy sources, they are all dependent on factors outside a human's control and rely on harnessing the weather or geography. Flywheel energy storage in India is dependent only on a manufacturer's ability to build them, with the only by-product being clean energy.

Why Amber Kinetics is the Industry Leader in Flywheel Energy Storage in India and around the globe?

Amber Kinetics has successfully extended the duration and efficiency of flywheels from minutes to hours. It has done so as on grid-scale based kinetic energy storage system (KESS). What does this mean? In much the same way that solar panels are placed on grids, Amber Kinetics flywheels are placed on a modern grid which enables a truly scalable and predictable energy source.

It is the industry's first commercialised four-hour discharge, long-duration KESS solution, powered by advanced technology that enables it to store 32 kWh of energy in a two-ton steel rotor which is easily recyclable. Individual flywheels on the grid can be scaled up to tens or even hundreds of megawatts, increasing the amount of energy that can be stored at a far lower cost than other energy plants.

Thanks to Amber Kinetics' game-changing flywheel technology, the future ofeco-friendly energy storage in India and the rest of the world has finally arrived.