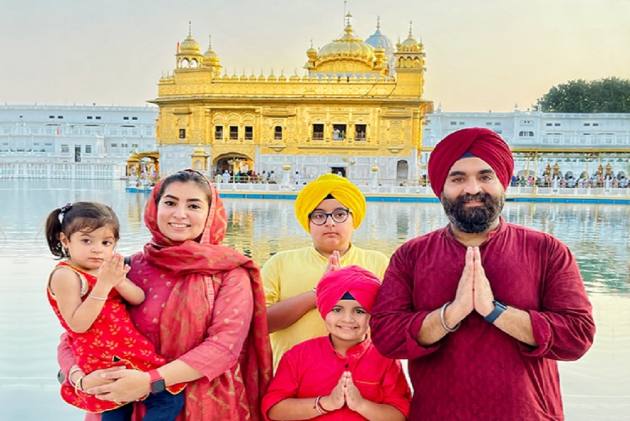 With millions of followers on social media, Harjinder Singh Kukreja is one of the most followed Sikhs online. He is a renowned restaurateur, a global citizen with strong traditional roots, a variety of interests, with an amazing social media reach of over 4 million combined followers on Twitter, Facebook, Instagram and LinkedIn.

When Harjinder Singh Kukreja steps foot in a new country or a new place or delves into a new subject, he carries with him his indomitable spirit of adventure, his knowledge of the heritage and legacy of India.

His vast experience and reach of active and significant influence in the world through social media, his sophisticated forays into meeting diplomats around the globe, and his unique detours as a keen family traveller are well known and acknowledged worldwide. All this with the responsibility and professionalism of a well-established business person, the love of a family person, the intervention of a public speaker and influencer, the gregariousness of a Punjabi with the courage and philanthropy of a Sikh.

Harjinder was awarded the ‘Jewels of Punjab’ Award in 2019 by India’s former Prime Minister Dr. Manmohan Singh for his contribution to Sikh and Punjabi culture and its promotion in his typical ways.

From installing Sikh emblems, the Ik Onkar and Khanda at the World War I memorial in Ypres, Belgium in the memory of fallen Sikh soldiers to his contribution and presence at the unveiling of the bust of Maharaja Ranjit Singh in St.-Tropez, France, Harjinder has been highlighting the Sikh military history and making extensive efforts to promote it.

From gifting a unique painting of Maharaja Ranjit Singh with his French General Jean François Allard to the French Ambassador in India, Alexander Ziegler, to hoisting the Nishan Sahib in Gallipoli in Turkey to pay homage to the unknown Sikh soldiers who were martyred there, Harjinder loves to promote the lesser known aspects of Sikh history zealously.

Harjinder Singh Kukreja is also a top-notch travel influencer and an ambassador for outbound tourism from India. The Turkish Tourism Board admires Harjinder‘s clout on social media, and he has been invited several times to Turkey to promote their tourism. He and his family have been hosted several times by Inflow Summits in several regions of Turkey in association with Turkish Airlines. From the UK Tourist Authority to Iran’s unofficial Tourism Board -Feel Iran and several top-level Hotel brands like Hyatt, Ritz-Carlton, Kempinski and Four Seasons have collaborated with Harjinder Singh Kukreja and sought exposure on his social media pages.

Harjinder Singh Kukreja is also known for his entrepreneurial acumen. He spearheaded his family’s venture into giving Ludhiana’s chocolate aficionados the city’s first Belgian Chocolate Cafe, Belfrance Bakers and Chocolatiers, in 2015. The Ambassador of Belgium in India, H.E. Mr Jan Luykx, inaugurated Belfrance in upmarket Ludhiana.
Harjinder Singh Kukreja travelled extensively to Belgium and other European nations to seek inspiration and even trained to craft real Belgian chocolate in Brussels to make Belfrance what it is today. Belfrance is famous worldwide for its annual chocolate Ganesha, which has received great reception by Indian and international media for many years.

A staunch believer in the significance and importance of the family unit for societal progress, Harjinder Singh Kukreja is well-known for being a family man. His social media pages are full of endearing images and videos of his loveable children -Rehras Singh, Aad Sach Singh and Rut Suhavi Kaur.  His wife -Harkirat Kaur Kukreja, whom he proudly introduces as the ‘Sikh Supermom’, is the powerhouse of his life.

The teachings of Guru Nanak make Harjinder always a step ahead to put his best foot forward by contributing during unfortunate natural calamities. He has helped many flood-affected people in Jammu & Kashmir and even the victims of the Chennai floods. “I believe in such times we all, as humanity, must give our services in the form of money, clothes, items of daily needs and food”, says Harjinder Singh Kukreja.

In his efforts to bring equality and humanity together, Harjinder organised a unique Sikh Langar inside Ludhiana’s historical Mosque -Jama Masjid, where he welcomed people of all religions. This initiative was acclaimed widely and received accolades from across the boundaries of countries and communities. From educating unprivileged children to contributing to their marriages, Harjinder Singh Kukreja and his family are always ready to pitch in.

Government schools and offices in France do not allow religious symbols like Turbans and Hijabs. Harjinder Singh Kukreja decided to voice his concern positively. In 2014, he skydived with the Turban from 14,000ft in St Kilda, Melbourne, Australia, and he is also the first Sikh to scuba-dive in the Turban in 2016 in Antalya, Turkey.

“My Turbaned skydive was an effort made to raise voice in favour of not just the Sikh religion but for everyone who wears articles of faith like the cross, hijab, kippah, skull cap and the Turban”, says Harjinder Singh Kukreja.