For him, the path he had chosen was utterly in contrast to his then personality. Harminder had a lanky physique with just 38 kg of body weight.

2021-12-30T18:06:50+05:30 Harminder Dulowal’s Continuity In Pursuing His Goal Made Him An Internationally Acclaimed Bodybuilder 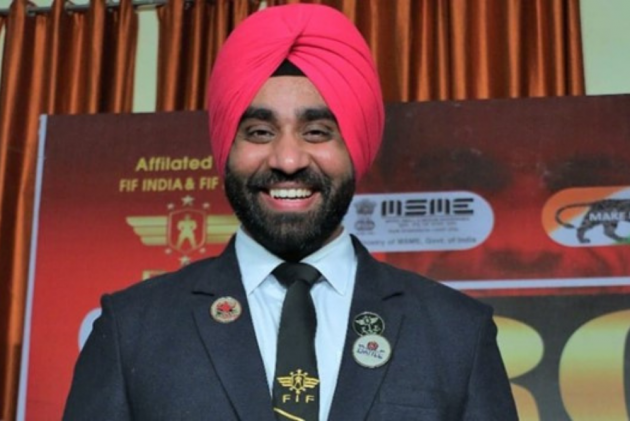 Do not you be surprised if you ever hear from someone that water has the potential to break the most robust rock apart. Initially, it might sound eccentric, but it is a fact. The process will not result instantly, in a day or a month, but the chance is high that the stone breaks apart in a year or two. Water has the potential to bifurcate the rock but not the strength. However, what converts the potential of water into its strength is its long term continuity in weakening the consolidated rock bit by bit and eventually breaking it into pieces.

In our lives too! The goals we cherish might seem impossible to achieve immediately because of our disability and non-preparedness, but taking a minor step towards the goal every day, for sure, brings us closer to accomplishing the goals. Every goal can be achieved with continuous attempts paired with the burning desire to create what you believe.

Harminder Singh, also known as Harminder Dulowal, had dreamt of becoming a bodybuilder when he was a school going boy. For him, the path he had chosen was utterly in contrast to his then personality. Harminder had a lanky physique with just 38 kg of body weight. Harminder’s life goal and body weight were often used to be troll material for his friends that he dealt with very positively. Instead of retreating from his goal, the critics motivated him to march towards his plan, which he eventually achieved persistently.

Today, Harminder Dulowal is a prestigious bodybuilder who has bagged many titles in his honour. Being titled vegan bodybuilder to Mr Asia gold medallist, Harminder Dulowal has achieved numerous titles and awards. Some of the titles he earned so far include All India Inter-university Silver Medallist, Mr World South Africa, Muscle War and Mr Asia. He currently is the president of FIF India (Fitness International Foundation), FIF International and WFF International certified judge. Harminder has also founded Red Power Energy Drink and Red Gym to facilitate aspiring bodybuilders.

Harminder Dulowal has reached the pinnacle of success in the field he had chosen way back in his school days. His journey from being a skinny boy to an internationally acclaimed bodybuilder, judge and fitness coach is the result of the continuity and struggle he infused to accomplish his goal.

Success is never a straight and smooth drive. It presents you hurdles, hardships and uncertainties. But those who cross all these impediments could only experience that success is worth it all. Harminder Dulowal relinquished his education to focus on his bodybuilding career. However, upon realising that education is a must, he enrolled for B.P.Ed (Bachelor of Physical Education) and continued his bodybuilding career simultaneously.

The next challenge he faced was financing the bodybuilding expenses, including diet and training. To meet the costs, he also did the job of delivery boy. During the testing time of his career, Harminder learned a valuable life lesson that hardships can only be overcome through struggle and successive attempts.

Harminder Dulowal, all through his bodybuilding career, has proven that expensive supplementary food is not a critical need to become a bodybuilder. Since the beginning, he has advocated and lived on a vegan diet to build his physique.

‘Everything is possible, and when you put in the effort, obstacles begin to go away. Just remember to stay focused and consume just what is healthy for your body. The younger generation believes that supplements may help them obtain a more defined muscular physique; nevertheless, this is a total lie. Consume a natural diet and food items in order to maintain your fitness and health over the long term.’ Advices Harminder Dulowal to the aspiring bodybuilders.

Harminder Dulowal provides free training to physically disabled and financially weaker persons for free. He has provided training to more than two hundred athletics, including men and women.