During the launch event, dignitaries and members of the Football Delhi gifted footballs to each of the 200+ girls present from underprivileged families 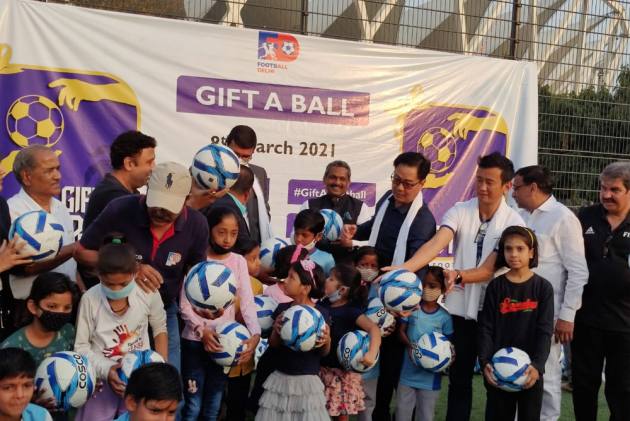 This initiative will also attempt to encourage the football-loving population in India to gift balls and turn this into a movement where gifting footballs to girls becomes a trend.

The minister appreciated the efforts of Football Delhi in promoting football among underprivileged girls.

"I’m extremely happy to see footballs in the hands of all girl players," Rijiju said. He also said that everyone should have a pen as well as football in their hands.

While urging everyone to support this campaign and motivate more girls to play football, Rijiju assured that there will be a separate league for women in Delhi.

Bhutia said that it’s a great opportunity to launch the #GiftABall Campaign on International Women’s Day.

"Over the years, we have seen many positive changes in Delhi and it is one of them. I wish all the players to do well in the future," said the former India captain.

Football Delhi Shaji Prabhakaran said: "Developing women’s football in Delhi is one of the top priorities for the Association. We wanted to celebrate International Women’s Day with a message which would encourage more girls to play football and with this campaign, we wanted to reinforce our commitment towards women’s football.

"Football is a sport with unlimited possibilities and when more girls from low-income families will be encouraged to play football in India then a world of opportunities will open for the girls. We are targeting to gift 5000-10000 footballs and we urge everyone to be part of this campaign and support us to make more girls play football”.

Funds generated from the crowdfunding will be used to gift footballs to underprivileged girls.

During the launch event, dignitaries and members of the Football Delhi gifted footballs to each of the 200+ girls present from underprivileged families.

To promote the campaign in social media Football Delhi will be using the following hashtags: #GiftABall #GiftAFootball #GirlChild