Listening To Shri Mahashivpuran In Chaturmas Will Be Fruitful For All: Dr. Samir Tripathi

Dr. Tripathi urged everyone to listen to Shiv Mahapuran on a daily basis to devote themselves to spirituality, and work towards bringing peace to the entire world. 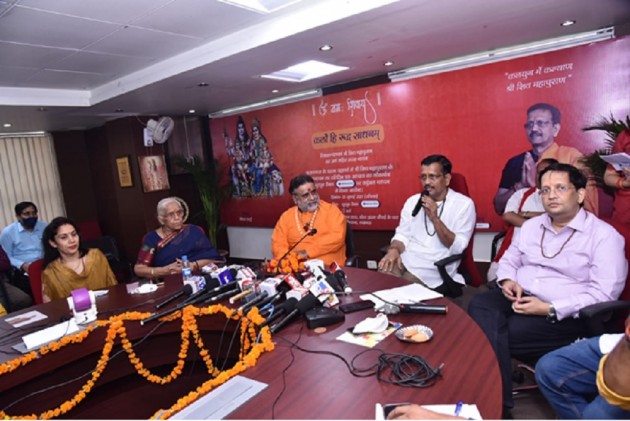 The auspicious occasion was graced by Shri Shivyogi Yuktanand Ji Maharaj, Chairman of Shakti Niketan Research Foundation. He has been working across India to re-establish Gurukul parampara and rishi parampara, his main motto being “Gurukul Lao Desh Bachao”. Dr. Samir Tripathi's family and various members of the Medhaj family were also present at the event.

On this occasion, Dr. Samir Tripathi, while addressing a press conference organized at Medhaj Tower in Ashiana said that due to the immense compassion of Devadhidev Mahadev, he got the privilege of bringing the glory of Lord Shiva to people not just in the country but all over the world.

Dr. Samir Tripathi said that Chaturmas has started, and it is believed in our religious scriptures that during this period Lord Vishnu along with all the deities go to rest for four months in Patal Lok. Hence, this is the time for us to develop our inner powers.

He further said that Shravan Mas, the beloved month of Lord Shiva, has also started from today. Lord Shiva is Sarveshwar, Mahadev, Adiyogi, the benefactor of all of us. He added that the merit we will earn in this Chaturmas is a thousand times more than normal days, which is why we must devote ourselves towards worshipping Shiva so that the merits earned can be useful for the entire society. In these tough times of the pandemic, listening to Shri Shiv Mahapuran will be very beneficial from the point of view of spirituality and devotion to God.

Talking further about Shri Shiv Mahapuran, Dr. Samir Tripathi stated that there are 466 chapters in the holy scripture. Releasing one chapter each day on YouTube channel Medhaj Astro, one can listen to Shri Shiv Mahapuran for their internal peace and well-being and inspire more and more people to listen to it.

Earlier, Dr. Samir Tripathi has sung Om Namah Shivay, Shiv Tandav Strota, Gajendra Moksha, Neel Saraswati, Bajrang Baan, and many other devotional compositions, including the entire Sri Ramcharitmanas (along with meaning), all of which are available on his YouTube channel Medhaj Astro, and have been appreciated by a lot of people who have gained immense spiritual benefits out of it. The music composition of of all these creations has been done by Sudhesh Khare and Omprakash Prasad.

In the corona period, Dr. Samir Tripathi recited the entire Ramcharitmanas in a musical form, along with its meaning, which has inspired millions of people to bring prosperity and harmony in their lives.

The rendition of entire Sampoorna Ramcharitmanas was released on YouTube channel Medhaj Astro on the holy festival of Ram Navami this year, and was blessed by the presence of spiritual guru Rambhadracharya Ji Maharaj and various saints, politicians and social workers.

Dr. Samir Tripathi quoted four lines of his father Late Shivdutt Tripathi's book Gita Vani that say, “The thought I practice is what I become, soon as the mirror of that thought is removed, see myself only in the consciousness.”

In the end, Dr. Tripathi urged everyone to listen to Shiv Mahapuran on a daily basis to devote themselves to spirituality, and work towards bringing peace to the entire world.