Fawaz Jaleel, the 29-year-old latest entrant to the books industry, has seen several chapters before it culminated into a stellar debut in Nobody Likes An Outsider, a political investigative thriller/mystery novel. 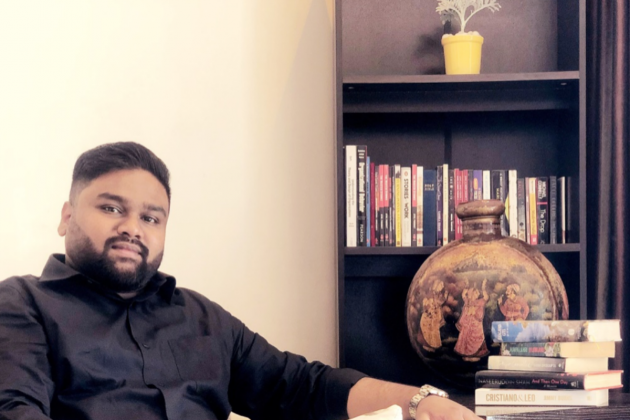 Fawaz Jaleel, the 29-year-old latest entrant to the books industry, has seen several chapters before it culminated into a stellar debut in Nobody Likes An Outsider, a political investigative thriller/mystery novel.

After reading his extremely well-researched novel packed with powerful storytelling and an insightful take on Indian politics, we expected a serious individual with a soft-spoken nature. But it all changed when we met this charismatic Indian author with a fine sense of humour. In his own words, he is an ‘accidental thriller novelist’ with an unsatisfied appetite to write satire, humour, and drama with a strong focus on human emotions. The obvious question in our minds was: why thriller then? To this, Fawaz sported a boyish smile and said every storyline he wrote eventually turned into a thriller. It was difficult for him to end chapters without leaving something that forces readers to turn pages. This effect was really visible in his book, Nobody Likes An Outsider.

Set in Begusarai, Bihar, the story revolves around the death of a promising young politician, followed by the death of his personal secretary. The CBI led by Yohan Tytler is entrusted with the investigation. Yohan is ably assisted by the charismatic Sukumar Azhagu and the ever dependable, Ila Qureshi. The investigation behind the death of the young politician opens up a pandora's box of hard-truths involving businessmen, political parties, religious leaders, journalists, and students etc. The young CBI team begins the investigation only to find that the mystery behind the murders lie in events from the modern history of Bihar and India.

Fawaz tells us that he owes a lot of his writing to his college days in Madras Christian College and Azim Premji University. While he does not write stories inspired from events in his life, he strongly believes that the friendships, experiences, and encouragement he got during those days are crucial to his writing career. After his masters, he went on to work with a public health organisation that gave him a deep dive into the health infrastructure of the country and also the health, empowerment, and financial constraints of marginalised communities. Post that, Fawaz had a long stint as a government consultant in Delhi where he worked with central government ministries, ministers, and top bureaucrats. Currently in Mumbai, he continues to handle brand and communications for a private company while writing on weekends.

Fawaz Jaleel claims that while research is the most exciting part of his writing process, it is marketing that is the most crucial for a book’s success. A candid Fawaz Jaleel admitted that he has a creative agency who helps with social media promotions for book sales. He believes that it is important to segregate work, especially marketing so that he can focus on his future projects. Currently, he is working on a standalone mystery/thriller novel, followed by the second part of the Yohan Tytler series. A humour-satire is also in the cards for 2022. As work and writing progresses, Fawaz Jaleel is excited about his first book’s cinematic adaptation which is also in its initial stages.

An alumni of Madras Christian College and Azim Premji University, Fawaz Jaleel completed his schooling from The New Indian School and The Asian School in Bahrain where his parents and brother stay. With a stellar response to his first novel, it is clear that Fawaz Jaleel is here to stay in Indian literature.