Rubies are rarer by far than diamonds — and some of the finest rubies today come from Mozambique. Mindful of the opportunities, FURA Gems, a fast-moving young mining company, is resolute in expanding the ruby market. emstone miners do love rubies. For centuries Burma, now Myanmar was the leading source of rubies. But Burma’s mines have been running out, and sanctions have squeezed supply, so fewer and fewer high-quality rubies have been available to consumers. Notwithstanding the depleting resources, miners have been able to bring this scarcity to an end.

“Some of the loveliest rubies now come from Mozambique, in Africa, from sources discovered as recently as the late 2000s. Mozambican rubies are characterized by a rich hue and perfectly balanced fluorescence,” explains Dev Shetty, the founder, president and CEO of FURA Gems.

The total global ruby production in 2021 might be around 40 million carats, as opposed to 150 million carats of diamonds. “This shows how essentially rare the ruby is, and FURA’s spread of Mozambique rubies is even rarer,” reminds Shetty.

Furthermore, Mozambique’s rubies were formed about 500 million years ago. This makes them several times older than Burmese rubies, though the latter is better known. The rubies of Mozambique have an unusual origin as well as great age. 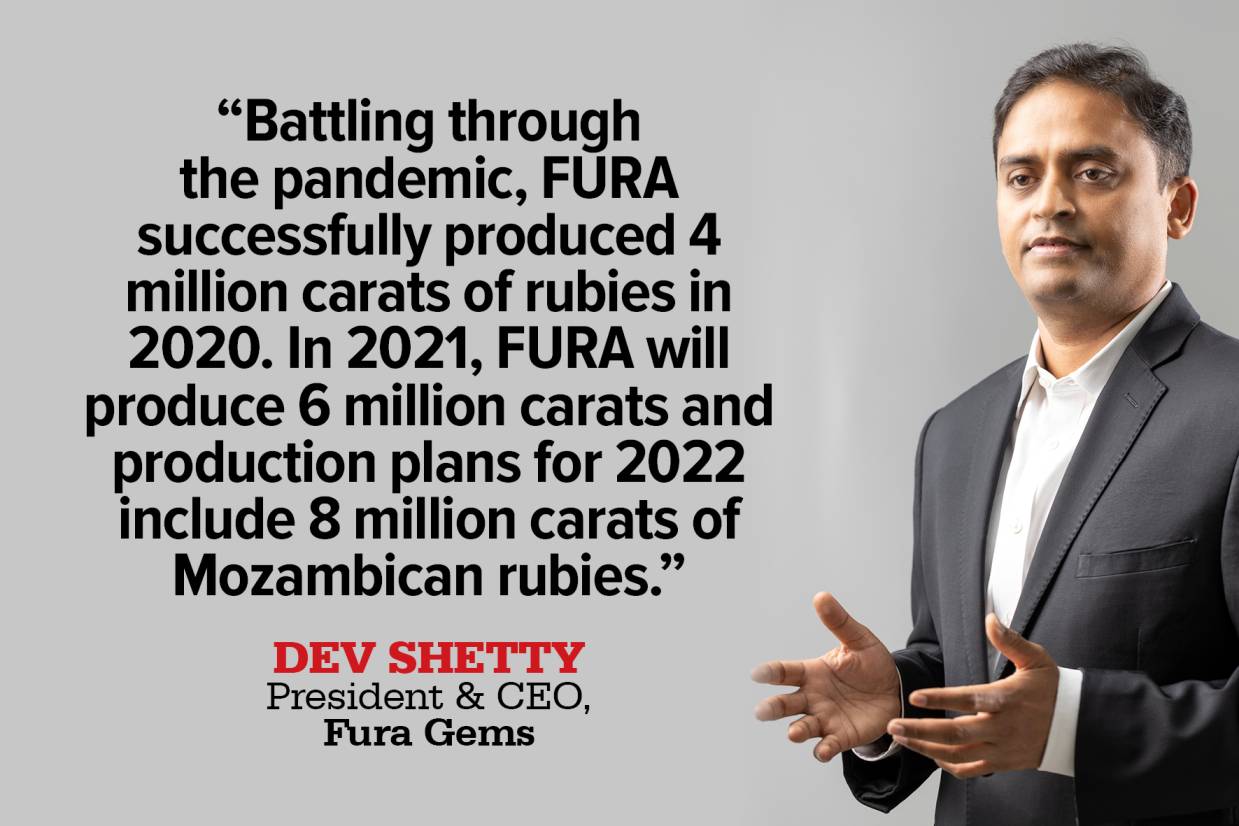 “Buoyed by the prospect, FURA Gems is single-mindedly, efficiently and sustainably expanding its sophisticated ruby operations in Cabo Delgado province,” he said. In September 2017, the company declared that it would acquire an 80 per cent share in four ruby licences covering 394 sq km of Cabo Delgado province. Today, the company holds seven ruby licences in Mozambique.

“Our judicious selection of mines and a scientific, systematic approach allows us to reduce the time taken between exploration and mining from five to seven years to just over two years,” says Shetty. And FURA Gems has set the record. It finished consolidating all the ruby licences in February 2020, and by March, it had already started bulk sampling.

“Although exceptionally large roughs of over 40 carats have been found here, the average size of a Mozambican ruby rough is below 3 carats,” says Shetty. This caters brilliantly to the premium as well as mass segments of the ruby jewellery market. Furthermore, these are available in an entire spectrum of seven hues of red, from the darkest red to the hot pink colour.

As preferences vary, “it opens up a world of new possibilities for consumers looking to own distinctive and individualized gemstones, which is good news for retailers. FURA Gems is thus giving ruby trade a diverse colour splash,” says Rupak Sen, chief marketing officer, FURA Gems.

After successfully concluding its first ruby auction in Jaipur in mid-august, Fura is looking forward to its Bangkok auction later this month.  Efficiency, stability, long-term reliability: FURA has developed these attributes well in advance of its inaugural ruby auction. Progressive players in the supply chain can look forward to an extraordinary exhibit of gorgeous, rare Mozambican rubies.

And they can expect this path-breaking enterprise, uniquely positioned as the first and only mining company in the world, to explore three-colour gemstone categories, including emeralds, rubies and sapphires, to go right on revolutionizing the global colour gemstone market.