Pictures That Redefined the Brand

A series of pictures of a Royal Enfield bike at the snowbound Khardung La shot by award-winning photographer, Arun Nangla, helped to the redefine the brand image of the bike. 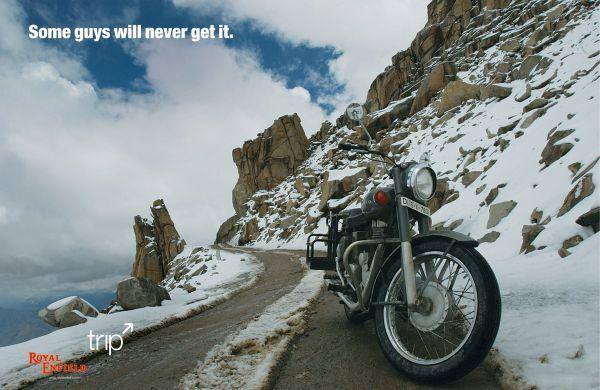 In advertising, sometimes a campaign stands so far apart from the usual clutter and noise that it becomes a case study. Through the history of modern advertising, there are quite a few campaigns that deserve the “iconic” tag. The common thread running through all such ad campaigns is that they convey the message with such powerful simplicity that it remains ingrained in the memory of the consumers for a very long time, cutting through the noise and clutter. In theory, at least, that’s the ultimate goal of advertising: establishing a brand at the top of the consumer’s mind.

In this regard, the Royal Enfield Trip-themed ad campaign that broke sometime in mid-2005, and continued for a few years through several iterations, falls in the category of iconic campaigns. It all started with a series of three print ads, each featuring a picture of a Royal Enfield Standard 500 cc en route to Khardun La in Ladakh, which was then claimed to be the highest motorable road in the world.

It was summer of 2004, when award-winning photographer, Arun Nangla, currently based in London, was touring Ladakh on his Standard 500 cc bike. By then, Nangla had already made his mark in photojournalism for his picture shot during the Kargil war among other assignments. Apart from photography, motorcycle touring was his other passion. On many occasions, he combined the two to shoot some stunning images in some of the remotest parts of India. It was on one such occasion that Nangla clicked a sequence of pictures that resulted in the original Trip campaign that helped Royal Enfield to reposition the brand as the ultimate touring and adventure riding motorcycle in India.

It was an overcast July morning in Leh, recalls Nangla, as he was getting ready for a planned a day trip to the top of the Khadung La along with another group of riders whom he met in the town the previous evening. As he started climbing up the road to the top of the pass, the skies above turned darker. Soon enough, cotton-balls of snow started falling from the sky. Through, poor visibility, Nangla made it to the top of the pass with the snowfall getting heavier. 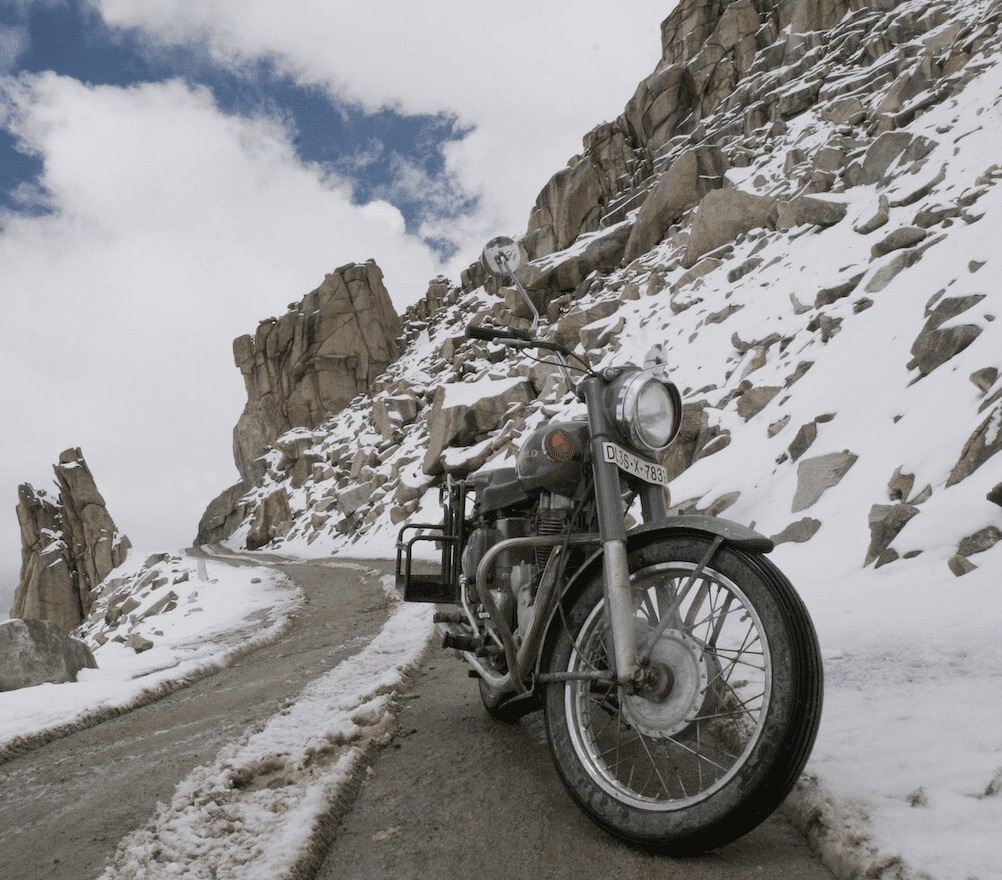 He was forced to wait at the top of the pass at 17, 582 ft for the snowfall to abate. After some time, as the snowfall stopped and the sky started clearing up, he observed the contrast that the pristine white snow offered against the rugged brown mountainscape. Not the one to miss an opportunity to frame pictures against stunning backdrops, Nangla fired off shots with his Enfield in the foreground. On the way down to Leh town, he shot some more pictures.

A month later, when he was back in Delhi he showed the pictures of the trip to his friends in advertising. One of his friends, V Sunil, who was handling the Royal Enfield account, saw the pictures and realized that they were great visuals for an ad campaign. With the help of one of the top art directors in advertising, Akash Das, he presented the campaign to the top bosses in Royal Enfield.

The visuals of the bike as the centrepiece against the stunning backdrop with the just one word “Trip” was intensely captivating. The ads didn’t need any supporting copy as the pictures screamed more than a thousand words, redefining the brand philosophy of the bike. The campaign was released in mid-2005 and instantly became a talking point. Subsequently, the theme was extended over several iterations, maintaining the narrative of lifestyle travel. But it was the original series of ads that helped Royal Enfield to reshape the brand image as an adventure touring motorcycle that was capable of tackling the roughest of terrains.

Looking back at the campaign that redefined Royal Enfield advertising, Nangla says, “I was plain lucky to be at the right place at the right time with my motorcycle. The snow, the brown mountains and sky provided the perfect setting for the pictures.” The rest, as they say, is history.