They Fall, They Rise and They Perform

Stunt riding is fraught with risks most of the time, and even the best in the business can bite the dust. But it takes inner steel to get back in the saddle of a bike after a severe injury. Naib Subedar, Sukhdev Singh, is one of the lynchpins of the Corps of Military Police’s Shwet Ashw team. As an integral member of India’s oldest motorcycle display team for close to two decades, he is all too aware of the attendant risks of performing stunts on the heavy Royal Enfield motorcycle—the mainstay of the motorcycle display teams in India. Over the years, he has taken more than his share of knocks whenever the gravity got the better of balance and skills.

As one of the most experienced members of the team, Singh is often entrusted with the task of developing new stunts and display formation to keep the show from getting jaded. But developing new stunts and formations is always fraught with risks. The dynamics of a moving motorcycle under shifting weight is an inexact science and sketchy art at best. The road to nailing a new stunt is a minefield of trial and error. And when the rider commits an error, even inadvertently, the price is paid by the battered body and broken bones. And, on particularly bad occasions, the injury might be so grievous that the road to recovery meanders through a maze of uncertainty, even under the best medical supervision. 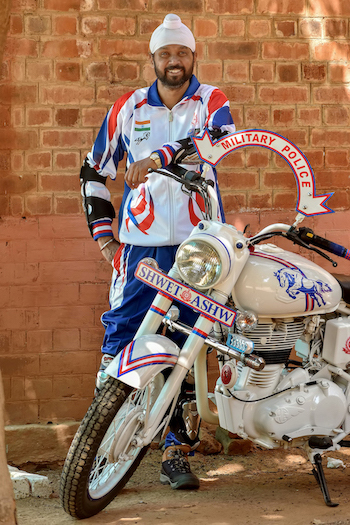 In 2017, Singh was tasked to introduce wheelies as part of their display routine. Since it was a new routine that was to be introduced at a later stage as part of the show; Singh had to master the art of riding a motorcycle on its rear wheel while balancing on the seat on one knee before he could teach it to the other members of the team. He was making good progress after a few days of practice at the CMP Parade Ground. But one evening when he was practising with his teammates also going about their practice drills, he got the balance wrong and lost control of the bike and landed heavily on the hard ground with a bone-crushing impact. 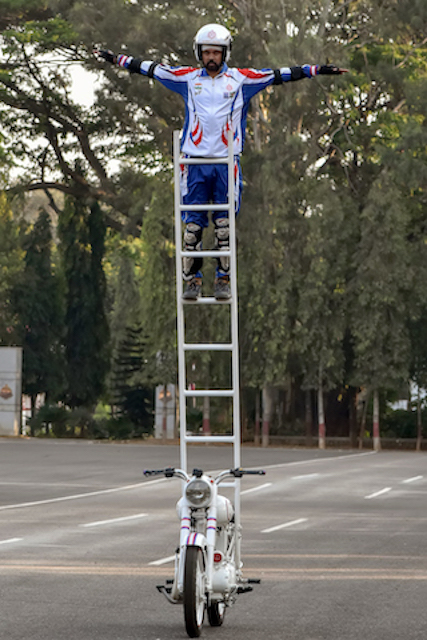 This crash on the warm summer day was no ordinary fall. As he fell to the ground, the pin of the side-stand on the bike that anchors the stand spring pierced through his boot and smashed the ankle, fracturing it in two places. The stricken rider was rushed to the base hospital by his colleagues where he underwent an emergency surgery. The damaged ankle was repaired with the help of titanium screws and metal plate.

But then began the long road to recovery, marked with a great sense of uncertainty. At that stage, Singh was not even sure if he would get back on the motorcycle again. As the days turned into months, his team-mates and family members gave him the strength and moral support to pull through the period of recovery. After approximately six months, he was back on his feet with the support of crutches. 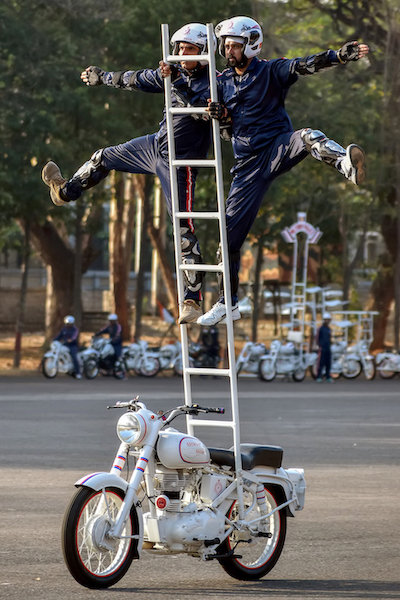 Walking gave him the freedom that he craved for and helped him to clear his mind. With ample time on his hands, Singh, who was still a Non-Commissioned Officers at the time of his accident, resolved to appear in the examination for Junior Commissioned Officer (JCO). Much to the delight of his friends and family, he managed to clear the exam to move up along his career path. “It was a very difficult period, but the support of all those around me helped to overcome the moments of self-doubt. I managed to become a JCO, but I desired to get back in the Shwet Ashw team kept getting stronger by the days,” recalls Singh. While he was still convalescing from his injury, he was always around to help the team with routine maintenance and administrative work. That was his way of retaining his link with his colleagues with whom he had spent a better part of a stint in the Military Police.

After persevering for almost a year and a half and intensive physiotherapy, Singh was back in the saddle of his motorcycle, but it would take him another six months to get back doing what he loved the most—being an active member of India’s finest motorcycle display team. As of today, Nb. Subedar, Sukhdev Singh along with Sub. NK Tiwari, continue to guide Shwet Ashw to break new ground with their breathtaking displays and formation.