This Startup Is Asking People To Share Their Biggest Insecurities

Many people believe in suppressing emotions because they see it as a sign of weakness, some do it purely to avoid getting hurt and most just lack the confidence to open up. 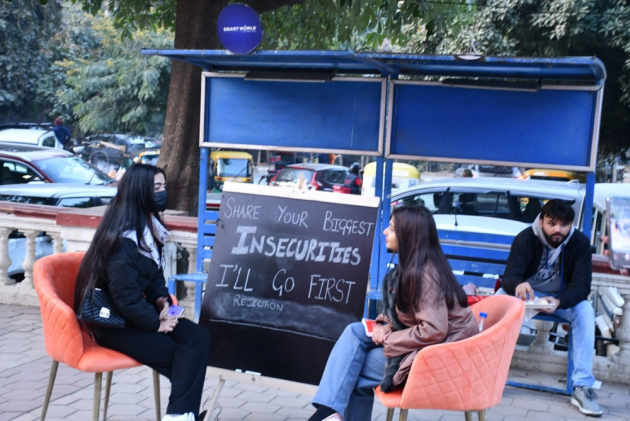 Indians don't always share their feelings with each other. Many people believe in suppressing emotions because they see it as a sign of weakness, some do it purely to avoid getting hurt and most just lack the confidence to open up. This insight was troubling to the founders of Now&Me, a startup that aims on building a safe space online where a community of empaths can share their feelings.

So they decided to put up a small installment in Galleria Market of Gurgaon* to show just how powerful speaking up and sharing your emotions can be. They put 2 chairs and a chalkboard in the middle of the busy market and asked people to share their deepest insecurities. But the thing about opening up is, others do it if you do it first. So they decided to put an empath from their team who started by revealing their own insecurity: being unable to hold a conversation with strangers. The idea behind this activity was to raise awareness around opening up and elucidating the power of emotions; how one feels light when they share thoughts that worry them and emerge stronger once they realise they are not alone.

Slowly a lot of people passing by started taking notice of this cute and intriguing setup, a lot of them stopped and wrote down their own insecurities. People’s issues ranged from anxiety, job expectations, family pressure, friends group, body image issues, looks, acne, loneliness, future and so much more. More than 100 people shared their insecurities with the brand and felt so much better. Everyone agreed that by speaking up we gain power over our insecurities.

The brand kept a respected counselling therapist on standby, in case anyone wanted to seek professional help- but mostly the results were empowering for people to feel light and see themselves gain power over their self-projections.

The activity was a huge success because this idea gave a micro-demonstration of how the community works online. The founders of the startup, Drishti Gupta & Bani Singh said “This was just a small experimentation to see & observe how many people are comfortable opening up to a stranger and we’re very happily surprised with the kind of participation we received.”

The activity was conceptualised and put together by Word Dogs, a creative agency which works with many startups. Their founder, Nipun Sood said, “It is rather gutsy of the client to take on such a risky and innovative form of marketing themselves. The integration was very subtle yet the pull towards the brand was highly successful.

The brand in no way is offering an alternative to therapy only promoting the idea of talking and opening up about your emotions.

All COVID related precautions were taken during the activity.