We bring you seven books that are creating waves this summer 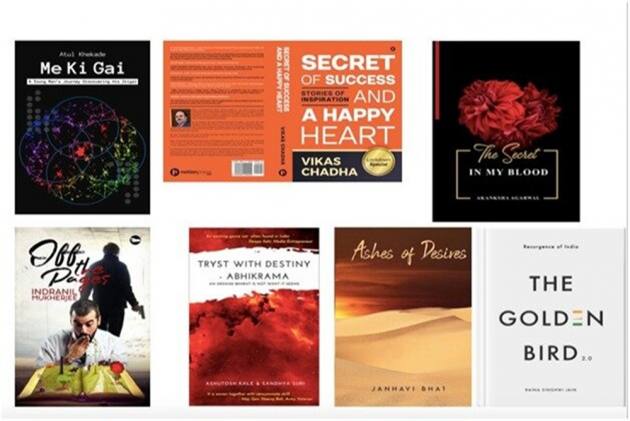 Very rarely we come across books that mesmerise us and create a good space in the readers’ minds. Some stories are even magical. Irrespective of whether it is non-fiction or fiction, we as readers always crave for better books that can satiate our hunger for quality literature. At this juncture, we bring you seven books that are creating waves this summer

1. Me Ki Gai by Atul Khekade

Me Ki Gai by Atul Khekade is a book about a man’s journey of self-discovery ---- about himself, his love, happiness and how to achieve success while working for someone you truly love and are passionate about. We see the concept of IKIGAI in this book. The book is inspired by this beautiful Japanese concept of having a direction or purpose in life, that makes one’s life worthwhile, and towards which an individual takes spontaneous and willing steps for a meaningful life.

We see the story of the main protagonist Parth, who is looking to start his career and build a better life for himself and his family. We see he is hopelessly in love with his college friend, Ashwini. But being with her is not in his stars. Then we see Prabhudas, who comes into Parth’s life as an angel and guides him to find a purpose in his life. Then Parth meets Krisha and starts his journey to find success and companionship.

The book is sharp and crisp. We see different principles of IKIGAI explained in this book. The explanations given by the character of Prabhudas are truly beautiful and something I would definitely keep in mind, for a lifetime.

2. Secret of success and a happy heart by Vikas Chadha

The book is written by Vikas Chadha, MD, GI Outsourcing. The book is a must read for every person across all age groups in the current world scenario where people are finding it difficult to cope with various challenges life is throwing at them both on professional and personal fronts. The success factor for each individual is different and in the end success would be measured with happiness earned and distributed by every individual in this journey called life.

The book is a good read for teenagers looking at a career choice, for young entrepreneurs, for homemakers for corporate professionals at various stages in their careers.

3. The Secret In My Blood by Akanksha Agarwal

The book is spread across three parts namely Ovulating in Emotions - When someone falls in love, everything seems extraordinary and magical. You'll begin analysing your lover with everything you adore from celestial objects to edible items. You wanted to go to the places to spend quality time and enjoy each other's company.

Second part is Bleeding in Love - this part is dedicated to the stage where one's heart breaks. The loneliness, darkness, negative thoughts looming over and everything reminds you of your partner. The sleepless night, tears, yearning for physical touch, endless memories become part of life.

Third part is Fertile to Fly - love and lust are both the side of the same coin. Physical intimacy is as much important as emotional bonding. In this part, Akanksha Agarwal depicts the craving of bodies where passion and love for each other are boundless and deep as the ocean. This segment is also a gentle reminder that love is about growing old together, and there is no moment you regret if you are with the one you belong to. A special poem that’s winning hearts of the readers from The Secret in my blood is -The whiff of his bones, intoxicating.

4. Off the pages by Indranil Mukherjee

When fictional crime investigator Tej Singh calls on his creator, author Dev Narayan, he sets into motion a ride that even a rollercoaster would flinch from giving.

Tej is fed up with the violent life he lives, being constantly under attack from his implacable enemy, Gomes, and blames Dev for it; Tej wants out. Also, he has a matter of the heart that he wants Dev to fix; the woman of Tej’s devotion completely confounding the already bewildered author... Obviously, Dev doesn’t believe him. To establish his beliefs, Tej takes Dev on that tumultuous ride which begins with a literal bang when they are attacked by murderous goons.

Multiple characters seem to be leaping off the pages of Dev’s novel, the criminals among them doing their brutish best to settle their hash. Oh, by the way, Dev also writes a romance series, as a catharsis from all the violence in Tej’s series… their characters too are coming off the pages. Mayhem ensues when both sets of characters cross each other’s paths while Tej and Dev run for their lives…

They can run but can they hide from Gomes and his enterprise (that the master criminal never calls his ‘gang’)?

5. Tryst with destiny - Abhikrama  by Ashutosh kale and Sandhya Suri

“I swear by the pure holy water of the Ganga, I am ready…." said the boy from the cremation grounds of Allahabad. He is convinced he will survive and will play the game better than anyone else will. He is not the only one. An army officer hopefully waits to see the India of his dreams take shape. A media mogul chances upon a possible secret that could blow a powerful man’s cover. A professor takes to politics to avenge the brutal killing of her parents. A bright young journalist quickly becomes the Prime Minister’s press secretary and knows too much. They all have secrets. They all have a common vision that ties them together --- an Akhand Bharat that is akhand by human spirit, emotion and vision. Will their secrets tear their lives apart or will they overcome to see their vision of India fulfilled? Set in India across the decades from early 1970’s to the summer of 2019, this is the Abhikrama, the beginning, of the evolving on an Akhand Bharat, a unified India. Is it possible or will the events obliterate the purity of intent each character sets out in their journey with, their stakes stacked up one with or against the other?

6. Ashes of Desires by Janhavi Bhat

“A thousand years from now, when the cups will be filled and the wells will be dry, when the insides will be empty and the shackles will collapse, when desire shall become revenge and revenge will satisfy. Then you will know, that is time.”

What happens when the world is fighting water scarcity and the only solution lies in the world that was first built? That is when a boy from the far west meets a girl who lived thousand years on the planet and an eagle who has four eyes? You will receive only in your dream. Desire once, and you will lose the dream. The saga unfolds and takes them to a time when things had just begun. I talk of the time when the stars had just bloomed, like flowers they were spreading their essence in the universe womb. Gigantic they were, larger than our sun. Everything was in ecstatic motion, it seemed slow but that was its rhythm. When millions of years passed like these, everyone got bored. That’s when two stars tried to find out a way. One was Lamor and one was Rezin. Together they stayed and remained by each other side. The story is set in the fictitious country Ner and fluctuates between various times span. With a lucid and a poetic style, the book focuses on the rudiments that everyone has forgotten.

7. The Golden Bird 2.0- Resurgence of India by Raina Singhwi Jain

The Golden Bird 2.0 draws from India’s rich past to take a fresh look at its potential for a glorious future — a second golden age, shaped by the powerful public will, economic wherewithal, and the nation’s status as the world leader. What made ancient India the Golden Bird in the first place? What did China, the Land of the Dragon, have in common with India, and when did these two ancient civilizations diverge on their paths to global success? While colonisation pressed the brakes on India’s confidence and self-reliance, China emerged from imperialism with a clear vision for its future and strong implementation to boot. The oriental superpower fashioned itself as the world’s factory, creating jobs and uplifting millions of people from poverty. How did China make its mark on the world stage, and where did India fall behind? How can India tap into its golden past to pave the way for a brighter future? Can Aatmanirbhar Bharat and Make in India usher in a new era of economic growth and global leadership? A closer look at our journey since Independence reveals the gaps that we need to bridge.

Raina Singhwi Jain addresses the immediate need for a quantum jump in our attitude towards development. While conventional wisdom suggests improvements in manufacturing, the ease of doing business and digital technology, Jain delves deeper, to draw surprising parallels between other areas that beg our attention — such as process engineering, communication design, journalism, decentralization of power and disaster management.