Directed by Vikash Verma, 'No Means No' is set in a city called Bielsko Biala in Poland which is tucked away near the world-famous ski slopes of the Beskid Mountains and Tatras Mountains. 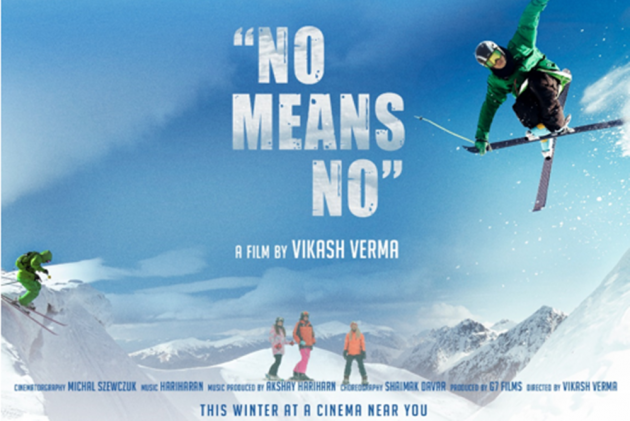 A lot has been said about the first Indo-Polish big-budget film, ‘No Means No’.

From Hollywood Megastar Steven Seagal to the who’s who of Bollywood, Sanjay Dutt, Preity Zinta, Shahrukh Khan, Suniel Shetty, and many more global faces backing and supporting the path-breaking and pioneering project that is sure to strengthen the cultural ties between India and Poland.

Shedding more light on the film which is slated for a November 2021 release, Hitesh Desai, writer of ‘No Means No’ shares exclusive details in his interview. Excerpts:

Q)  The action thriller ‘No Means No’ is scheduled for a November release. The trailer shows some intense skiing scenes. This is the first time the sport has been displayed on the Indian screen. How and why did the writing and production team choose this sport?

'No Means No' is set in a city called Bielsko Biala in Poland which is tucked away near the world-famous ski slopes of the Beskid Mountains and Tatras Mountains. The Polish people’s favorite go-to sport in the winter months was either Skiing or Snowboarding, so it seemed almost apt that since the film is also set in the winter months, the sport should be a part of the story. Furthermore, Director Vikash Verma himself has been an Indian ranking sportsman who has played the Nationals in Table Tennis and was the captain of his university’s table tennis team during the era of renowned table tennis legends Manjit Dua and S Sriram. Sports has always been a topic close to his heart and he was very much keen on including the thrilling experience that a sport could provide in the story. Both pieces of the puzzle fit together when our story’s location provided the answer to the desire that the director had in mind, and in a way became a very crucial sequence of the film. In ‘No Means No’, the audience will see masterfully displayed ski action sequences. Because of its link with sports, the release plan is also to release in China wherein Beijing, the Winter Olympics 2022 will be held.

Q)  What was your research process like to write the script of such a film which has aspects of two different cultures and two different countries? Is it true that you spent almost a year in Poland to complete the research?

Yes, very much so. To write a story set in a completely different environment and climate, besides the information that the internet, books and other secondary research sources can provide, it is important for a writer to feel the landscape, the climate, the change in seasons and grab the pulse of the city or country where the story is based. If I have personally experienced what it is like to walk and feel the biting cold of winter in Poland and the way my body reacts to keep me warm, then it becomes easier for me to write similar instances for the character as well. This in turn, provides the actor with much more detail to work with. The year I spent in Poland was useful in gathering this information which helps in character enhancement and minute details of the story which have an overall enhancing impact. Not just the writing, but every other department of the film is being helped by huge talent. The music director of ‘No Means No’ is the world-renowned music legend Hari Haran, the background score has been provided by Akshay Hariharan with a track even sung by the famous Shreya Ghoshal. Choreography is also at the top of its game with Mission Impossible famed Shiamak Davar, and Michal Stasica from Poland.

Q)  What has your experience been like working with Director Vikash Verma? Tell us something about his process.

It is always interesting to work with Vikash Verma. He is extremely detail and reality-oriented. At a time we are seeing cinema being taken over by visual effects and CGI, he is one of the few directors out there who absolutely rejects the notion, believing that what can be captured in real locations, climate and light, can never be captured in a studio environment. I believe this comes from his time spent as an assistant director to industry veterans and legends like Rajkumar Kohli known for his large-scale scenes with the most number of extras and Vikash Verma’s time as an advisor on world-renowned films like Lagaan, Deewangi, Bhoomi and PM Modi. Most of these films have taken on a similar path of avoiding VFX and CGI. He has even acted in the film Padmashree Laloo Prasad Yadav

This aspect of Vikash Verma’s style as a director motivates a writer to do even more research into realism behind a story, as well as motivates his actors to perform to their best as they are subject to real conditions. In ‘No Means No’, winter is a crucial part of the story, and we actually shot in temperatures of -33 degrees Celsius and the shoot schedule was even deferred by Verma once, to capture the essence of real Polish winter. Besides this, the entire crew and cast of ‘No Means No’ had so much more to work with simply because they were taken to the best of locations to attain a real feel of the environment. Vikash Verma’s next project is ‘The Good Maharaja’, a true story based on events of World War II. For this, he is even planning to approach Roman Polanski for his support and guidance in direction since he has been witness to the horrors of the Holocaust and his input will be priceless in shaping the story of the film.

Q)  How helpful were various governing and administrative bodies with respect to the scripting and filming process of ‘No Means No’?

The various authorities and governing bodies have been extremely supportive, cooperative and encouraging. Support was shown by Deputy Prime Minister of Poland Prof. Piotr Glinski, the then ambassador of Poland to India, Tomasz Lukaszek, the Hon. Consul General of Poland in Mumbai, Mr. Damian Irzyk, the President of Bielsko Biala Mr Jaroslaw Klimaszewski, and Member of Parliament Ms Malgorzata Pepek, also chairwoman of the Polish & Indian Parliamentary group encouraged us and showed their full support in making this film. ‘No Means No’ is a path-breaking and pioneering bilateral project that seeks to promote the cultural bonds that India and Poland share and The Polish Government and the Polish consulate in India have from the beginning of the project displayed the spirit of cooperation vis-a-vis filming and access to beautiful locations and landscapes that Poland has to offer. The Indian authorities have been equally supportive. The then Indian ambassador of Poland, his excellency Mr Ajay Bisaria (now India's High Commissioner to Canada) rightly said about ‘No Means No’: “It underlines the cultural connections and friendship between the two countries.” And as a writer, I was grateful for the support shown to the film by my fellows from the Screen Writer’s Association as well. It is great to know that amongst writers there is a spirit of fraternity.

Q)    Tell us about the cast of ‘No Means No’. As a writer, does the chosen cast fit the description of the characters that you had in mind?

All the actors for ‘No Means No’ were chosen with a very specific brief which is important for any film. Gulshan Grover plays the role of an alcoholic lawyer with a dark past. He had molded himself into his character beautifully. His experience in more than 450 films can clearly be seen on-screen where he has performed complex character emotions in the severest of weather.

The upcoming hero, Dhruv Verma, is now known for his intense action sequences from ‘No Means No’. He plays the role of Raj, a ski champion from India. His innocent face yet his ability to show intensity as an actor is what makes him fit the role. He always worked hard during the demanding schedule of ‘No Means No’, be it in Indian temperatures or in the freezing cold of Poland. Dhruv is now working on ‘The Good Maharaja’, a true story based on World War II, and has taken add-on training with the guns used in WWII: Enfield M1917 rifles, Springfield M1903 with edged bayonets, Thompson M1A1 submachine gun to really get into the skin of this character. It seems almost as if Dhruv was destined to play the role of a soldier during World War II, being that his family has a history of military officers. Dhruv’s grandfather was a reputed naval officer. One of his uncle is a retired airforce pilot, Wing Commander MM Johri, and the other is a retired Colonel, Mr Alok Saxena of the Rashtriya Rifles, who will train Dhruv in Military discipline and lifestyle.

Some scenes from the film are also set underwater, being that the German U Boats were a major threat in World War II and Dhruv has taken extensive training in scuba diving to prepare for the challenging scenes that will take place underwater. Legend studios and the maker of Mary Kom, Sarabjit, and PM Modi has even approached his production company, G7 Films, for another film if the script is approved.

The other members of the cast like Natalia Bak and Sylwia Czech, playing the role of an innocent mountain girl from Poland and rally driver from Poland respectively, have also performed brilliantly and really gone into the skin of their characters. There is a scene where Natalia delivers a powerful monologue, wherein her emotions are sure to make the audience teary-eyed. All the other cast members have also been chosen based on extensive research.

A Powerful performance has been given by Anna Guzik who plays the role of a lawyer opposing Gulshan Grover. Other notable performances are by Pawel Czech and Jerzy Handzlik.

All in all, I definitely agree with the great casting choices and they fit the description of the various characters.