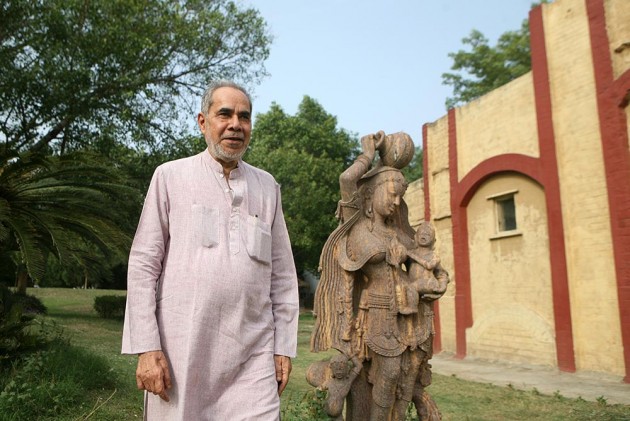 The June 13, 2016 issue of Outlook carries an interview with the newly appointed chairman of the Indira Gandhi National Centre for Arts (IGNCA), Ram Bahadur Rai.

Dr Sachchidanand Joshi, member-secretary, IGNCA, has in an official communication dated 6 June 2016 denied that such an interview with Outlook ever took place.

Below is Outlook magazine's response to Dr Sachchidanand Joshi to clarify its position and to place the matter on record.

Many thanks for your letter of 6 June 2016, on the interview of Shri Ram Bahadur Rai, president of the IGNCA, with our senior special correspondent Pragya Singh, published in the 13 June 2016 issue of Outlook magazine.

It boggles the mind that such a letter should be coming from your office, bearing your signature.

Ms Singh was introduced to Shri Rai in person on Thursday, 26 May 2016. He gave an appointment for an interview for the evening of Friday, 27 May 2016. He specifically asked our correspondent which organization she represented and whether she had come with a prepared questionnaire.

Once Shri Rai was satisfied, he spoke to our correspondent for a full one hour—face-to-face, on the record.

Subsequent to the interview, Ms Singh once again personally met Shri Rai to inform him that a photographer from Outlook would contact him for a photo-shoot, which he readily agreed to.

Our correspondent was present with photographer Sanjay Rawat on the day of the shoot, Wednesday, 1 June 2016, for which Shri Rai willingly posed (as can be seen in the picture printed in the magazine), and whereupon he also agreed to answer a few more follow-up questions.

The follow-up interaction was to take place in person the next day, Thursday, 2 June 2016, but eventually it was done over the phone due to paucity of time.

Outlook places a high value on ethical practices. I hope the IGNCA does, too, instead of indulging in calculated calumny.

Many thanks for your letter of 9 June 2016 in response to my letter of 8 June 2016, on the interview of Shri Ram Bahadur Rai, president of the IGNCA, with our senior special correspondent Pragya Singh, published in the 13 June 2016 issue of ‘Outlook’ magazine.

It is disturbing that such a letter should bear the imprint of the Government of India.

My response to you clearly captured when our correspondent met Shri Rai; how he insisted on a prepared questionnaire beforehand; how he gave the interview on the record; when he posed for photographs; and how he took on follow-up questions on the phone.

That IGNCA should insist and reiterate that no such interaction took place with ‘Outlook’ magazine, despite the mountain of evidence, reflects poorly on India’s premier arts body. It is beneath us to dignify this slanderous claim with a response except to point out the following.

Does the IGNCA President meet anybody who calls on him, discuss the Constitution at great length with them, allow the interaction to be recorded, and thereafter, consent to have a photo shoot, which officials at his IGNCA office help coordinate and facilitate?

Therefore, to remove all doubts in your mind, ‘Outlook’ has put up on its website and on social media, a six-minute audio clip of the over 90-minute-long interview (in two parts) that Shri Rai gave Ms Singh on 27 May and 1 June 2016.

In these six minutes, our correspondent’s questions and interjections can be heard. More importantly, Shri Rai’s answers, in Hindi, can be equally clearly heard. He says, and I quote in translation:

"All Mr B.R. Ambedkar did for the Constitution is correct the language of the drafts prepared for him by J. Vengal Rao [sic]."

"Ambedkar did not write the Constitution."

"Ambedkar said that if need be, I will be the first person to set fire to the Constitution."

"Ambedkar's role in drafting the Constitution is a myth. It is a myth created as part of identity politics."

For the record, our correspondent was introduced to Shri Rai by individuals known to him and us, who were present at an event held in New Delhi on May 14, where Shri Rai made similar points that he made to ‘Outlook’ on May 27 and June 1. Shri Rai’s comments at that event, of which ‘Outlook’ is in possession of video evidence, formed the basis for our interview.

In its 21 years of existence, ‘Outlook’ magazine has earned a global reputation for free, fair and fearless journalism. It does not behove an organisation like the IGNCA to play this juvenile game.